Unfortunately was a bargain €24,000 yearling purchase 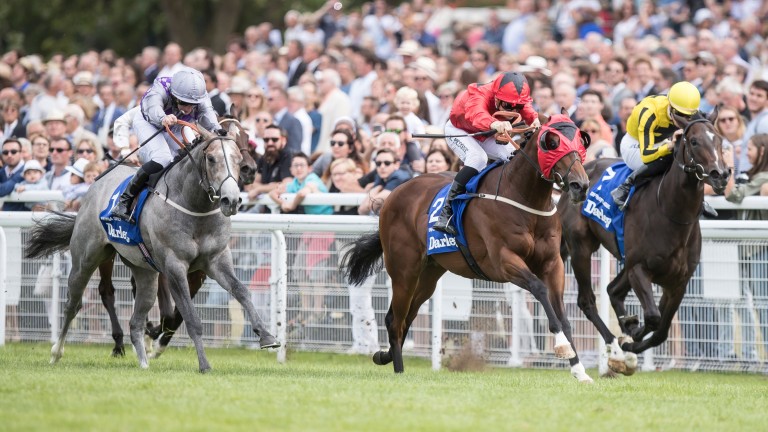 The first juvenile Group 1 of the French season fell the way of Unfortunately, a son of the late Society Rock, leading home a one-two-three for freshman sires in the 6f Darley Prix Morny at Deauville on Sunday.

His stablemate Havana Grey – a son of Havana Gold and winner of the Molecomb Stakes at Goodwood earlier this month – was a length and a quarter away in second, with Dabirsim filly and Royal Ascot scorer Different League a short head back in third.

Trained by Karl Burke and ridden by Tony Piccone, Unfortunately was building on his win in the 5½f Group 2 Prix Robert Papin at Maisons-Laffitte last month.

Bred by his sire's custodians Tally-Ho Stud in County Westmeath, Unfortunately is a half-brother to the Group 2 Temple Stakes winner Look Busy, out of the winning mare Unfortunate, who was purchased by Tally-Ho for €5,000 in 2005 as a concubine for their stallions.

The 20-year-old daughter of Komaite, herself out of an unplaced half-sister to dual Group 3 winner Singing Steven, also has a two-year-old Sir Prancealot filly and a yearling Morpheus filly.

Having finished second to Starspangledbanner in the Golden Jubilee Stakes as a three-year-old, Society Rock returned to Royal Ascot the following year to go one better. That season he also won the Haydock Sprint Cup, while his five-year-old campaign saw him twice finish second to Lethal Force in Group 1 company.

Having stood for three seasons before succumbing to laminitis, Society Rock is clear on top of the European first-season sires' table by winners this year.

Eye for a bargain

Bought from Tally-Ho for €24,000 at last year's Tattersalls Ireland September Yearling Sale, Unfortunately provides further evidence, if any more were needed, of Karl Burke's knack of sourcing top-class talent in the bargain basement.

He bought dual Group 1 winner Odeliz for €22,000 from Haras de Grandcamp at the 2011 Arqana October Yearling Sale, while Quiet Reflection, a £44,000 breeze-up purchase from Powerstown Stud, won both the Commonwealth Cup and Haydock Sprint Cup in an impressive three-year-old season for Burke.

While Havana Gold was to be denied a first Group 1 winner in the Morny, he consolidated his excellent start over in Ireland when Treasuring became his second stakes winner in the Group 3 Qatar Racing Club & Equestrian Centre Curragh Stakes.

The filly was picked up from Stringston Farm by David Redvers for 32,000gns as a foal at the Tattersalls December Sale in 2015. She is the first foal of the Excellent Art mare You Look So Good.

Havana Grey, their sire's first Group winner, was also well bought. He was purchased a year ago, just over the road from the site of his Group 1 podium, for €70,000 by BBA Ireland from the Coulonces Consignment at the Arqana August Yearling Sale.

The four-year-old filly held on gamely from the Siyouni mare Siyoushake in second, with Dubawi filly Left Hand in third.

Bred by Darley, who also celebrated Pattern wins for Defoe and Sobetsu over the weekend, Ajman Princess is one of four winners from as many runners out of the Listed-placed Mark Of Esteem mare Reem Three, a half-sister to Afsare who won the Celebration Mile at Goodwood in 2013.

Teofilo supplied Antipodean Group 1 winners Humidor and Palentino and Meydan scorer Special Fighter earlier this year, and had a notable weekend double as Massaat ran out a dominant winner of the Hungerford Stakes at Newbury on Saturday.