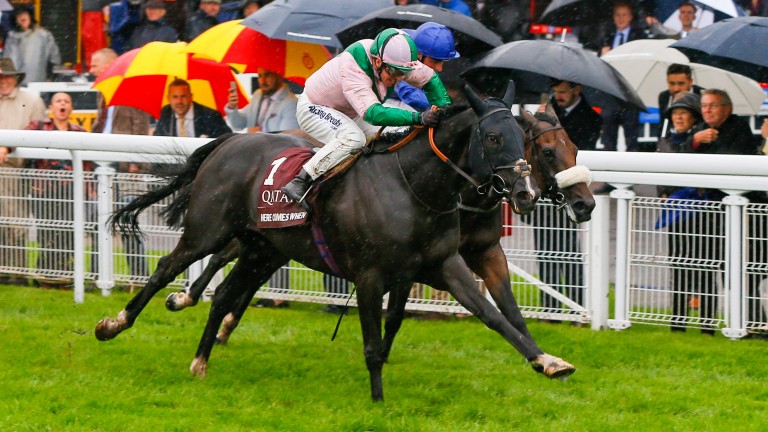 Here Comes When sees off hot favourite Ribchester in the Sussex Stakes
Mark Cranham
1 of 1
By Martin Stevens 5:39PM, AUG 2 2017

Three years after his retirement from covering duty and five months after his death aged 24, the late, great Danehill Dancer showed once again what an outstanding source of Group 1 talent he is when his son Here Comes When landed the Qatar Sussex Stakes on Wednesday.

In weather at Goodwood that was more gruesome than glorious, 20-1 chance Here Comes When held off hot favourite Ribchester (by Iffraaj) by a neck on the soft going with Lightning Spear (Pivotal) three quarters of a length back in third.

It was a surprise result as the Andrew Balding-trained Here Comes When finished third of five runners in a Listed contest at Windsor last time out and had won the Listed Hambleton Handicap in May although, in mitigation, the seven-year-old was a fair fourth to Solow in the Sussex Stakes in 2015.

But if Here Come When's form did not look quite up to Group 1 standard, his pedigree certainly did.

He is the 23rd top-level winner sired by Danehill Dancer, joining an illustrious roll of honour that includes Classic scorers Again, Dancing Rain, Legatissimo, Mastercraftsman and Speciosa as well as brilliant talents Choisir, Esoterique and Where Or When.

Danehill Dancer is exerting a deep influence in pedigrees, as his sons Air Chief Marshal, Choisir, Fast Company, Mastercraftsman and Monsieur Bond have all sired Group 1 winners of their own, as has Choisir's son Starspangledbanner.

He is also the damsire of Group 1 winners Alice Springs, Minding and The Gurkha, while Choisir's early daughters at stud have already produced stars My Dream Boat and Winter. 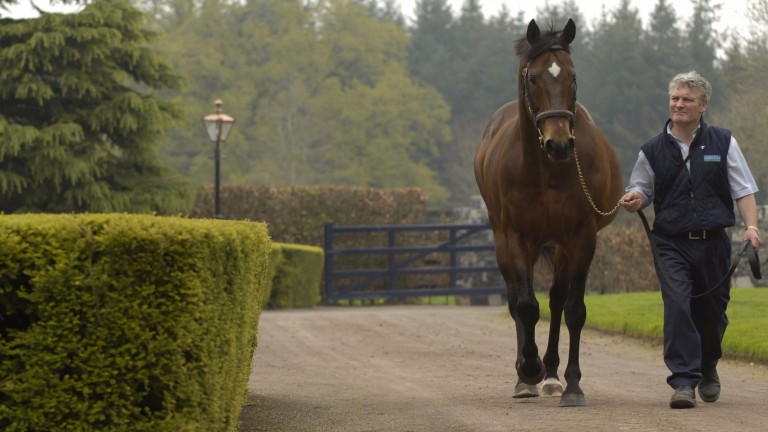 All of which is even more impressive when you consider that, as a horse whose most notable victories came in the Phoenix Stakes and National Stakes, Danehill Dancer was initially marketed as a cheap source of speed, standing his first season at Coolmore at Ir£4,000.

Here Comes When has a fair distaff pedigree, too. His dam, the Spinning World mare Quad's Melody, was the fourth top-rated two-year-old filly in France in 2001, when she won the Group 3 Prix d'Aumale.

Quad's Melody, who has produced four winners from seven runners, is a half-sister to Bonapartiste, winner of the Grade 2 Del Mar Handicap and runner-up in the Hollywood Turf Cup, Eddie Read Handicap and Oak Tree Turf Championship all at the highest level, as well as Listed scorers Go Got and Sablier Noir.

Here Comes When was bred by Old Carhue and Graeng Bloodstock – also breeders of top-notchers Grendisar, Rosdhu Queen and Termagant – and sold to Hugo Merry Bloodstock on behalf of owner Fitri Hay for €170,000 at the Goffs Orby Yearling Sale.

The gelding's three-year-old half-sister by Nathaniel, Melodic Motion, has won her last three starts in handicaps for Ralph Beckett and could make it a notable Goodwood double for the dam when she lines up in the Group 3 Lillie Langtry Stakes on Thursday.

Quad's Melody also has a yearling colt by Sea The Stars and was covered by Lope De Vega last year.

Acclamation's juvenile expertise to the fore in Vintage Stakes