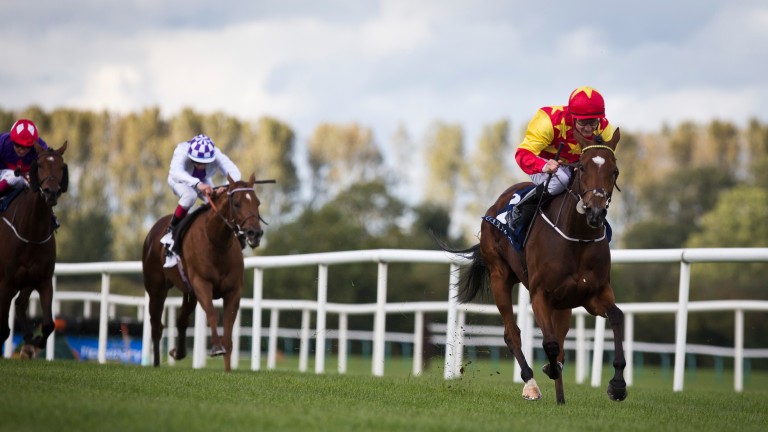 Having made a number of high-profile acquisitions at public auctions in recent years, the China Horse Club has further strengthened the quality of its broodmare band with the private purchase of Harry Angel's dam, Beatrix Potter.

The 13-year-old daughter of Cadeaux Genereux, who was bred by Ballyphilip Stud's Paul and Marie McCartan, was bought by the China Horse Club prior to her superstar son landing victories at the highest level in the July Cup and Haydock Sprint Cup.

Due to foal a brother or sister to the immensely talented sprinter any day now, Beatrix Potter will make a familiar journey later this year as she returns to Yeomanstown Stud to be covered by the ever-popular Dark Angel for a third time.

Mick Flanagan, China Horse Club's European bloodstock and racing manager, said: "She's an exciting mare and one we're definitely delighted to have in our portfolio. The most obvious option is to go back to Dark Angel and that's what we're doing.

"It was a great bit of business to have bought her before Harry Angel won his Group 1s. We’re obviously delighted, not only for us but also for the breeders of Harry Angel, the McCartans, who do a great job.

"We bought a bunch of mares privately last year and we'll probably look to do the same again this year."

Irish 1,000 Guineas heroine Jet Setting is just one of the high-profile acquisitions the China Horse Club have made at public auction, having parted with a sale-topping £1.3 million at the 2016 Goffs London Sale to secure the daughter of Fast Company.

Sent to France to visit Le Havre for her first cover last year, Jet Setting has recently delivered a colt foal by the son of Noverre and will now join Beatrix Potter on the visit Yeomanstown Stud's Dark Angel.

Flanagan said: "Jet Setting has had a cracking colt foal which we're very happy with. She's done really well and seems to have blossomed with the pregnancy.

"Dark Angel is absolutely flying at the moment and he's only 13 years old so is still in the early stages of his stallion career. He gets you racehorses first and foremost but he also has that commercial side to him. It bodes very well for him."

Group and Grade 1 winner Just The Judge, who the China Horse Club own in partnership with Qatar Racing, is set for a date with perennial champion sire Galileo once she delivers a foal by Dubawi in the coming months.

Haras de Montfort et Preaux's Le Havre is one of a number of stallions that the China Horse Club maintains shares in and this year his book will include the Group 2-placed Nobilis, who is currently in foal to New Bay.

Flanagan said: "We've got a very nice Australia two-year-old colt out of her who goes to John Gosden. She's a nice young mare and Le Havre has done what he's done off a very small stud fee.

"The future looks bright with him, especially with the big books that he's covered still to come further down the line."

Making full use of shares in one of France's most exciting stallions, the China Horse Club is sending three mares to be covered by Haras de Bonneval's Siyouni.

The trio are the Listed-placed Siamsaiocht, a Teofilo sister to Dewhurst Stakes scorer Parish Hall, the Shamardal mare Dusky Queen, and Queen Mary Stakes third One Chance, a daughter of Invincible Spirit. Both Dusky Queen and One Chance are currently in foal to New Bay.

Flanagan added: "Siamsaiocht has just had her first foal, a seriously good filly by Siyouni, and she's going back to him on the back of that. Siyouni's fee has gone from €45,000 an €75,000 and probably quite rightly.

"Every time you open the paper you see he has another winner or another stakes horse. We love having shares in him, we'll keep breeding good mares to him and probably race and sell stock by him.

"Both Dusky Queen and One Chance are young mares and time will tell if they're any good or not but we're giving them every chance to succeed."

Champion Stakes hero Almanzor, standing his first season at Haras d'Etreham, has been chosen for the Listed-winning Le Havre mare Summer Surprice, while another daughter of Le Havre, Crisolles, will visit Haras de Grandcamp's hotshot Dabirsim once she delivers a foal by Siyouni.

White Bullet, a Listed-placed and winning daughter of Exceed And Excel, will visit Newsells Park Stud resident Nathaniel once she has delivered a foal by New Bay.

The son of Galileo is one Flanagan believes represents tremendous value in 2018 and said: "He's done an exceptional job with his first crop of three-year-olds and I hope people are sitting up and paying attention to it and taking advantage of the fee.

"You're getting a lot of value at £20,000 and he may not be at that price much longer. It's great that Enable stays in training this year and Juddmonte have given Enable's dam back to Nathaniel this year."

With a broodmare band of 30, the majority of the China Horse Club mares are booked in to support Ballylinch Stud's New Bay, a stallion the operation has a majority share in and has supported heavily in his first season at stud last year.

Those set to visit him this year include Madernia, a winning Duke Of Marmalade mare who recently delivered a colt by Dark Angel.

"He's a Classic-winning son of Dubawi and he had good support in year one getting some very highly rated mares and he's filling up just lovely for his second season,” said Flanagan.

"Hopefully he can make it into a good stallion in time. If he can do what his sire Dubawi has done then we're on the pig's back. We're not sure if he can do it yet but we're going to make sure he gets every chance to prove it."

A handful of mares are also set to visit Coolmore's freshman sire Australia, another stallion who the China Horse Club have ownership in.

FIRST PUBLISHED 2:40PM, MAR 3 2018
It was a great bit of business to have bought her before Harry Angel won his Group 1s