International SIRE IN THE SPOTLIGHT

Martin Stevens reports on a hot spell for Darley's flagbearer 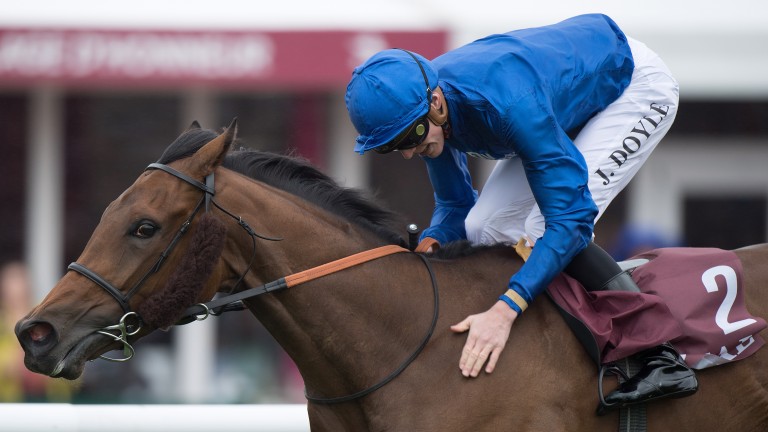 Progeny of Dubawi were always going to be in strong demand at Book 1 of the Tattersalls October Yearling Sale this week, but a dazzling set of results in the run-up to the auction, which starts on Tuesday, might just have redoubled prospective buyers' determination to add a youngster by Darley's premier stallion to their string.

Dubawi supplied his second consecutive winner of the Prix Marcel Boussac on Sunday as Wild Illusion improved on her third placing in the Group 3 Prix d'Aumale last time out to take the prestigious Group 1 contest for two-year-old fillies.

The filly – who followed in the footsteps of her colleague in Charlie Appleby's stables, Wuheida – is a Godolphin homebred out of Rumh, a daughter of renowned stamina conduit Monsun who was a Listed winner over ten furlongs and was Listed-placed over three furlongs further, too.

Rumh is out of Royal Dubai, a Group 3 winner over a mile at two in Germany and a half-sister to Beverly D Stakes and Prix de Malleret winner Royal Highness (also by Monsun), the dam of high-class middle-distance performer Free Port Lux.

So a step up in trip next year should only bring about further improvement in Wild Illusion.

Progeny of Dubawi usually get better with age – indeed, Wuheida and Wild Illusion are the only two juvenile Group 1 winners in Europe for the sire – and one who is hitting peak form later in his career is Mubtaahij, who landed a deserved first success at the highest level in the Awesome Again Stakes on dirt at Santa Anita on Saturday.

The five-year-old entire, a €450,000 Arqana August yearling purchase by Form Bloodstock on behalf of Sheikh Mohammed Bin Khalifa Al Maktoum, was originally trained by Mike De Kock, for whom he was an eight-length winner of the UAE Derby before running behind American Pharoah in the Kentucky Derby and Belmont Stakes and finishing second to California Chrome in the Dubai World Cup.

He then raced for Kiaran McLaughlin, and was a head second in the Woodward Stakes last year and fourth to Arrogate in his second stab at the Dubai World Cup in March.

Mubtaahij was transferred to Bob Baffert in July and on his first start for the legendary trainer he was a clear-cut winner at Santa Anita on Saturday, putting him firmly on course to join stablemates Arrogate, Collected and West Coast in the Breeders' Cup Classic.

Mubtaahij appears to be taking after paternal grandsire Dubai Millennium, hero of the Dubai World Cup on dirt, as his other immediate family members were, like Dubawi, top-notchers on the turf. He is a half-brother to Prix de l'Opera scorer Lily Of The Valley out of Pennegale, a placed daughter of 2,000 Guineas winner Pennekamp.

Dubawi's sons Frontiersman and Red Galileo finished first and second in the Listed Godolphin Stakes at Newmarket on Friday, too, but it was perhaps the victory of Bonneval in the Group 1 Underwood Stakes at Calufield on Sunday that will give the sire's colts a little extra allure as they go through the ring in Newmarket in the days ahead.

Dubawi has been a little slow to come to the boil as a sire of sires with his first sons to stud, Makfi and Poet's Voice, not convincing the market with their early runners off the bat; the former has since been sold to Japan and the latter has had his fee reduced as his yearling prices have fallen.

But, not for the first time and certainly not the last, breeders may have been a little hasty in jumping to conclusions.

Makfi's New Zealand-bred daughter Bonneval, winner of the Oaks at home and across the Tasman Sea earlier in the year, took the scalp of Hartnell to win the Underwood, while Poet's Voice has amassed a haul of 27 two-year-old winners this year – a tally beaten in Europe only by the prolific Kodiac – and his German 2,000 Guineas-winning son Poetic Dream was sold to Astute Bloodstock for €900,000 at the Arqana Arc Sale on Saturday evening to continue his career in Australia.

Dubawi yearlings have been like gold dust at the yearling sales in recent years. At Book 1 last year they accounted for the two 2,600,000gns joint-top lots, Group 3 winner Glorious Journey and exciting novice stakes scorer Emaraaty, and the 15 lots by the sire who sold made an average just shy of 1,000,000gns.

We can safely expect Dubawi to be in the headlines again in the week ahead.

FIVE DUBAWIS AT BOOK 1 SURE TO BE IN DEMAND

Lot 13 ch c ex Dubawi-Izzi Top (Pivotal)
The first by the sire through the ring this week will surely threaten the seven-figure mark, assuming his physicals live up to the page. His first three dams – Izzi Top, Zee Zee Top and Colorspin – were all Group 1 winners; his half-brother by Oasis Dream, Dreamfield, made 1,100,000gns at Book 1 in 2015; and Zee Zee Top's son by Dubawi is last year's joint-top lot, the promising Emaraaty.
Consigned by Meon Valley Stud

Lot 222 b c ex Sky Lantern (Red Clubs)
The first foal out of Ben Keswick's brilliant racemare, a champion at two and three who notched victories in the Moyglare Stud Stakes, 1,000 Guineas, Coronation Stakes and Sun Chariot Stakes. If Sky Lantern can only do half as well as her own dam, Shawanni, at paddocks, she will be doing all right. Sky Lantern is one of ten winners and five black-type performers out of the mare.
Consigned by Highclere Stud

Lot 347 b c ex Attraction (Efisio)
As if this colt's pedigree wasn't attractive enough already, it has benefited from a big pedigree update as Elarqam, his half-brother by Frankel who sold to Shadwell for 1,600,000gns at Book 1 last year, was the impressive winner of the Group 3 Tattersalls Stakes at Newmarket on Thursday. He is also a half-brother to a Group 3 winner and sire in Fountain Of Youth and his dam needs no introduction.
Consigned by Floors Stud

Lot 416 b c ex Danedream (Lomitas)
With apologies to Marks and Spencer, this isn't just any Dubawi colt; this is a Dubawi colt who is the first offspring out of a female winner of the Prix de l'Arc de Triomphe to be offered as a foal or yearling at a public sale since My Typhoon, by Giant's Causeway out of Urban Sea, made 1,800,000gns at Tattersalls 15 years ago. Danedream also, of course, won the King George VI and Queen Elizabeth Stakes and, to gild the lily, her half-brother Venice Beach has this year won the Chester Vase and finished a close third in the Grand Prix de Paris.
Consigned by Newsells Park Stud

Lot 461 ch c ex Finsceal Beo (Mr Greeley)
Another colt with a page that was already solid enough – as a son of a champion two-year-old and dual Classic heroine and a half-brother to Beresford Stakes scorer Ol' Man River – but has been reinforced by his three-year-old half-sister La Figlia finishing a close fourth in the Listed Rosemary Stakes at Newmarket on Friday on only her second start.
Consigned by Al Eile Stud

FIRST PUBLISHED 6:46PM, OCT 1 2017
A step up in trip should only bring about further improvement in Wild Illusion next year

'Sunday is not good' - rain could turn Arc day ground soft at Longchamp 'I got my leg over a horse again, the buzz was back' - Winston returns to riding 'As an afterthought, I decided I should do a £1 each-way acca - I won £550,000' What's on this week: all eyes on quality Arc as Longchamp takes centre stage 'We have two going to the Arc in great shape' - Hurricane Lane to join Adayar It's a Jamie Spencer special as Cambridgeshire gamble is foiled by shock winner