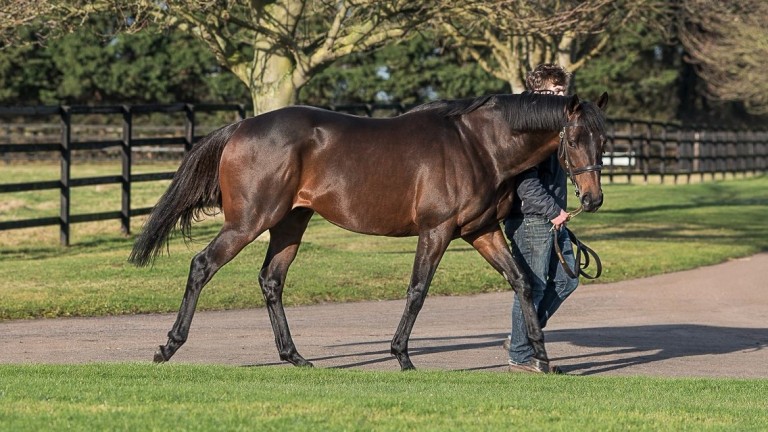 Time Test stands at the National Stud in Newmarket after he was purchased by The Jockey Club at the end of his racing career from his breeder Khalid Abdullah’s Juddmonte Farms.

He retired aged five, a winner of six of his 14 starts which included two victories at Group 2 level and three placings in elite company amassing £620,562 in career prize-money earnings.

Although clearly high-class, Time Test was also known for his consistency on a racecourse, only finishing out of the top four once.

Trained by Roger Charlton for the large part of his career, Time Test’s first stakes victory came in the Group 3 Tercentenary Stakes at Royal Ascot, which he followed up by running fourth behind Arabian Queen in the Juddmonte International Stakes at York two months later.

In September he was sent to Newmarket to contest the Group 2 Joel Stakes producing a fine performance to defeat Custom Cut by a length, with subsequent dual Group 1 winner Decorated Knight finishing third. He rounded of his three-year-old career with an unplaced run in the Breeders' Cup Mile.

After being kept in training as a four-year-old, Time Test won the Brigadier Gerard Stakes first-up, following up that win with a fine third behind Hawkbill in the Coral-Eclipse.

He added a second Group 2 win to his CV on his start in the York Stakes, after which he was transferred to Chad Brown in America for whom he finished second in all three appearances, including the Manhattan Stakes and the Fourstardave Handicap.

The National Stud's chairman Guy Roxburghe said: "We are hugely excited to be teaming up with New Zealand’s longest established stallion stud to offer Time Test to breeders there.

"His first season at stud here in England has been a great success and we really couldn’t have wished for a stronger list of breeding right supporters, all of whom have sent him some really wonderful mares."

Time Test is out of Group 1-winning mare Passage Of Time and by Darley's perennial sire Dubawi, who has sired 147 stakes winners in total and his progeny are headed by 35 Group/Grade 1 winners.

Passage Of Time is herself a sister to Group 2 winner Father Of Time and Listed winner Continuum and a half-sister to Falmouth Stakes winner Timepiece.

His granddam is the Sadler's Wells winning mare Clepsydra a half-sister to Double Crossed the dam of multiple Group 1 winner Twice Over.

Sam Williams, Little Avondale principal, said he was looking forward to welcoming the son of Dubawi at the Wairarapa Farm.

"We are extremely proud and excited to be standing Time Test here at Little Avondale," said am Williams. "It has been over four decades since we stood the English bred Oncidium, who won the Group One Coronation Cup and went on to become New Zealand’s Champion Sire.

"Time Test has a wonderful pedigree by a champion sire and from a very strong female line. He is an impressive, athletic individual with a very kind eye, however, it was his performance on the track that really caught my attention. He had a unique toughness and a super turn of foot. It is these credentials that Time Test brings with him that will appeal to New Zealand Breeders," continued Williams.

FIRST PUBLISHED 12:06PM, APR 25 2018
We are extremely proud and excited to be standing Time Test here at Little Avondale