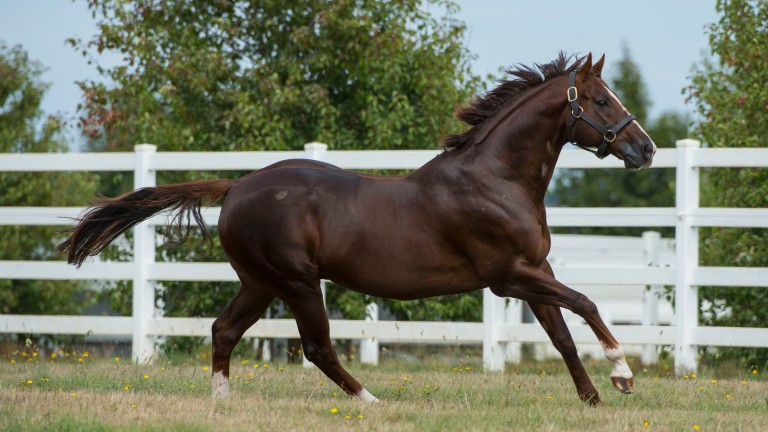 Written Tycoon edged out I Am Invincible for the title
Woodside Park Stud
1 of 1
By Tim Rowe of ANZ Bloodstock News UPDATED 4:19PM, JUL 31 2021

Written Tycoon, in a stud career traversing three states and 14 years, has won his maiden Australian general sires championship, ending the four-year reign of prolific rival Snitzel, and the first 'Victorian' stallion to do so in more than 40 years.

Yarraman Park Stud’s I Am Invincible, who sired an Australian record 208 individual winners last season, was second on the overall sires’ table while Not A Single Doubt was third and Snitzel, after four consecutive years at the top, finished fourth.

Written Tycoon’s premiership is also a crowning moment for Mark Rowsthorn, who played studmaster at Woodside Park Stud during the pivotal period the son of Iglesia made his long march up the Australian sires’ table.

Rowsthorn, who completed a deal to sell Woodside Park Stud to Eddie Hirsch in recent weeks, declared Written Tycoon as “an out and out champion”.

His fee increased from an advertised A$13,750 to A$110,000 (inc GST) under Rowsthorn’s watch before a one-year agreement saw Written Tycoon stand at Arrowfield Stud in the Hunter Valley last year for a fee of A$77,000.

As the current season draws to a close ‘Vinnie’ has added 3 winners yesterday, now 207 this season in total. He has surpassed ‘Not A Single Doubt’ and is currently sitting in 2nd on the General Sires, behind Written Tycoon, with the season to conclude this Saturday. pic.twitter.com/F5ts2sw3yz

He is the first Victorian-based stallion to be Australia’s leading sire since Century in 1978-79.

“From a humble start, he did it the hard way with working-class mares and now he’s covering the very best. The future is very exciting with sons of standing looking very much like they have carried the genes to produce high-quality juveniles,” Rowsthorn said.

“Written Tycoon stood at Woodside for nearly ten years and he provided the anchor to our roster. His fertility and longevity are hallmarks of his legendary status.

“We will miss him very much but we will continue to be one of his largest customers.”

Also this season’s leading Australian three-year-old sire, Written Tycoon had stints at Eliza Park Stud in Victoria and Queensland prior to relocating to Woodside Park for the majority of his career and the 19-year-old will live out his days at Yuesheng Zhang’s Yulong Stud at Nagambie where he will stand for a fee of A$165,000.

Written Tycoon, who began his stud career in 2007, had been at Woodside Park Stud from 2013 to 2019, finished ninth on the table last year, seventh in 2018-19 and eighth the previous two seasons.

His previous best finish was in 2015-16 when he finished third on the table, the same season in which his Queensland-conceived son Capitalist won the Golden Slipper.

“Woodside provided 20 to 30 mares to Written from day one and we did our best to bring him to the attention of all breeders over the years,” Rowsthorn said.

“His success is very much on the horse but without our management and support his success may not have been as great.”

Yulong Stud’s chief operating officer Sam Fairgray was thrilled that Written Tycoon had joined Zhang’s stallion roster at the peak of his powers.

“He’s such a durable stallion. He gets colts, fillies, sprinters and horses who get over distances. He’s very versatile,” Fairgray said.

“We’ve seen his yearlings sell for A$1.2 million at Magic Millions, he had the sales topper in Melbourne and so forth.

“He’s shown what a fantastic stallion he is because he’s upgraded a lot of his mares and he hasn’t started with a high-quality batch of mares.

“As he’s become more successful, the quality has improved and so have his results.”

Written Tycoon’s prowess as a sire of sires was strongly enforced last season through the deeds of Golden Slipper winner Capitalist and Newgate Farm barnmate Winning Rupert while this season he has Ole Kirk (Vinery Stud) and Group 2 winner Dirty Work (Spendthrift Australia) retiring to stud.

“In the next few years people who want to buy colts for the syndicates, the Written Tycoon colts are going to be very popular and he’ll be a good broodmare sire in the years to come as well,”  Fairgray said.

“I think he’s recognised now as obviously one of the elite stallions here in Australia and the broodmares that he got last season and what he’s going to get this season, he’s getting the best broodmares in Australia, so he’s a lovely horse to have about.

“Having worked with some of the best stallions like Redoute’s Choice and Written Tycoon, their character and personality are very similar.

“They are both chilled, relaxed horses and they are able to pass that onto their progeny and that is what helps them to be successful on the racetrack.

“He’s a lovely old horse, he has a great temperament and we are all very proud to have him standing at Yulong for the rest of his career.”

FIRST PUBLISHED 2:46PM, JUL 31 2021
I think he’s recognised now as obviously one of the elite stallions here in Australia