Waldkonig hoses up in Wolverhampton novice stakes for John Gosden 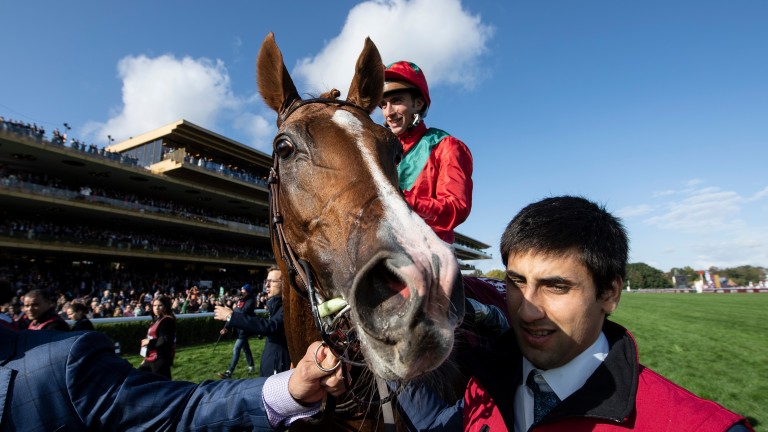 Waldgeist is the centre of attention after winning the Arc
Edward Whitaker
1 of 1
By Martin Stevens 7:35PM, DEC 7 2019

The debut of Waldkonig, the Kingman two-year-old half-brother to Arc hero Waldgeist, at Wolverhampton on Saturday was keenly anticipated and indeed he was sent off the 6-4 favourite for the novice stakes over eight and a half furlongs.

But few could have anticipated the jaw-dropping display the John Gosden-trained colt would put up, as he tracked the leaders under Rab Havlin and took up the running two furlongs out before stretching clear to win by nine lengths.

Zoran – an Invincible Spirit colt out of Filia Regina, a daughter of Galileo and Ouija Board, who had run a promising seventh on his first start for Hugo Palmer – was left for dead in second.

Waldkonig is owned in partnership by his breeders Newsells Park Stud and Gestut Ammerland, as was the case with Waldgeist.

Newsells Park Stud's general manager Julian Dollar watched the race on video from the Arqana December Breeding-Stock Sale in Deauville and reported: “We're absolutely thrilled. We didn't think he was going to run like that; the idea was to give him an education and some experience, and if he was in with a chance then to give him a push. But he was really impressive.

“It's a maiden at Wolverhampton, so we can't get too carried away, but we're delighted. He has a high knee action, so I know John [Gosden] is going to be careful about where he goes, and he's probably not going to be a horse who appreciates fast, summer ground.

“But he handled the synthetic surface at Wolverhampton well and he's a horse to look forward to in the spring. As usual, the trainer will guide us where we need to go.”

Not only is Waldkonig a half-brother to Waldgeist, who won the Criterium de Saint-Cloud, Grand Prix de Saint-Cloud and Prix Ganay in addition to the Arc and is embarking on his second career at Ballylinch Stud next year, but he is also a sibling to Group 2 winner Waldlied and the useful Waldstern, also in training with Gosden for Ammerland.

Dollar reported Waldlerche is in foal to Dubawi and is likely to return to Waldgeist's sire Galileo in 2020.

He also had an update on Waldlied, a four-year-old daughter of New Approach who looked to have the world at her feet when an impressive winner of the Prix de Malleret for Newsells Park and Ammerland in July 2018.

“We thought she was very special, and that she would be an Arc filly for us, but she did a tendon and, after recovering, managed to do it again, so we retired her and funnily enough we bred her to Kingman this year,” he said.

FIRST PUBLISHED 7:35PM, DEC 7 2019
He handled the synthetic surface well and he's a horse to look forward to in the spring. As usual, the trainer will guide us where we go