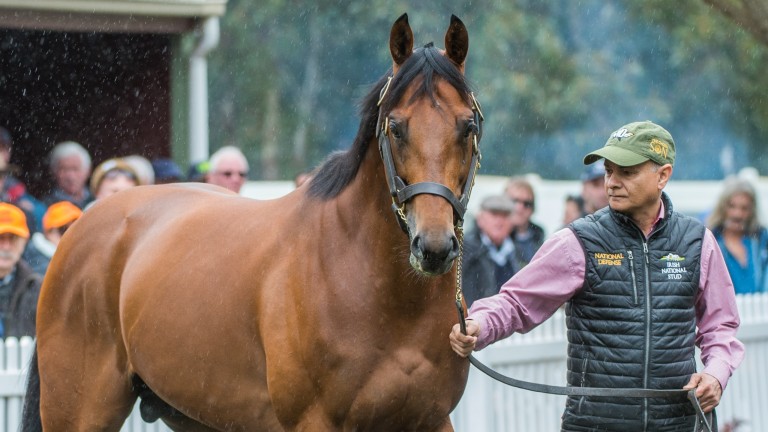 National Defense: son of Invincible Spirit has died at the age of eight
Sharon Lee Chapman
1 of 1
By Bloodstock World staff 10:18AM, SEP 17 2022

Widden Stud has announced the death of National Defense, the Group 1-winning son of Invincible Spirit who had shuttled to Australia from the Irish National Stud.

"His oldest Australian progeny are yet to be raced, but with 80 two-year-olds in the southern hemisphere this season, we look forward to seeing his name live on through their performances."

The eight-year-old had made a successful start to his second career as the sire of last year's Breeders' Cup Juvenile Turf Sprint winner Twilight Gleaming, a filly who was also second in the Queen Mary Stakes for trainer Wesley Ward and Stonestreet Stables LLC.

National Defense was himself crowned champion two-year-old colt in France following his win in the Prix Jean-Luc Lagardere in 2016. A six-length winner on debut, he was placed a further two times in the Prix des Chenes at two and then the following season in the Prix Djebel.

He was out of the Kingmambo mare Angel Falls, a half-sister to Group 3 winner and Irish 1,000 Guineas second Anna Salai, the dam of Derby and King George hero Adayar. The pair are also related to Surrey Stakes winner Iguazu Falls and multiple black type winner Advice.

National Defense is a half-brother to the stakes-placed performers Cascading and Nordic Defense. He did not return to the Irish National Stud for the 2022 breeding season due to an injury while covering in Australia.

FIRST PUBLISHED 10:18AM, SEP 17 2022
National Defense was himself crowned champion two-year-old colt in France following his win in the Prix Jean-Luc Lagardere in 2016