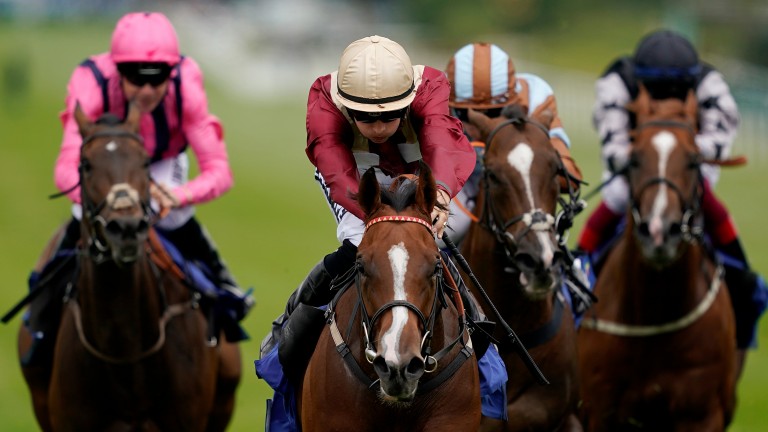 Bumble Mitchell recently went into the paddocks of her farm in Scamblesby, Lincolnshire, with a few members of staff to give some of her older boarding mares their regular worming treatment.

As she got to Easy To Imagine, a 19-year-old daughter of Cozzene she cares for on behalf of owner Marie Matthews, she was moved to reflect on the extraordinary life of the unassuming mare in front of her.

“It just suddenly struck me: she must be one of the top ten broodmares in the country,” she says. “I said to the others, 'I don't think you girls realise what you're dealing with here'. She might be a roly-poly old mare but what she's done is pretty exceptional, especially when you think of the stallions she's been to.”

Mitchell is right. In an industry that obsesses about stallion achievement, we are all guilty of sometimes underestimating the powers of the female of the species. A sire receives credit for supplying one or two top-flight winners from hundreds of runners, but a few special mares manage to do similar with racecourse representation that biology dictates must be much, much smaller.

Easy To Imagine is one such outstanding matriarch, having produced the Group 1-winning sprinters Alpha Delphini and Tangerine Trees and last Saturday's Group 3 Coral Charge Sprint Stakes scorer Kurious from just half a dozen runners.

All six won races and four have notched Racing Post Ratings of at least 100, with another – the useful four-year-old filly Fairy Falcon – in possession of a best mark of 99. Her 'worst' runner, Galatian, was no dud, running up to 88.

Other blue hens have hatched more than one elite winner – the likes of Beauty Is Truth, Halfway To Heaven and You'resothrilling spring to mind in recent seasons – but whereas they have done so after being mated repeatedly with the incomparable Galileo, Easy To Imagine has compiled her wonderful record from being sent to a variety of inexpensive stallions.

Her first foal, Masai Moon, was the result of a liaison with Middle Park Stakes winner Lujain when he stood at Dalham Hall Stud at £5,000. Masai Moon won eight of his 84 starts and frequently ran with distinction in competitive handicaps.

He was followed by Tangerine Trees – conceived when his sire Mind Games was advertised at £3,500 at Bearstone Stud – who won 15 of his 70 starts and struck in the Prix de l'Abbaye in 2011. Next came five-time winner Galatian, who is by former Ballylinch Stud resident Traditionally, who stood at €8,000.

Easy To Imagine, pictured in her retirement at Bumble Mitchell's stud in Lincolnshire

Easy To Imagine's fourth runner, her best to date, is Alpha Delphini, whose record stands at eight wins from 28 starts and who had Mabs Cross, Blue Point and Battaash behind when triumphant in the Nunthorpe last year. He hails from the first crop of Captain Gerrard, when the sire stood at £3,500.

Then followed Fairy Falcon, by a relatively pricey pick in Sepoy at £15,000, and the mare's final foal Kurious, who was by another bargain sire in Kuroshio, priced at £3,500 at Overbury Stud in 2015.

In a stark illustration of how Easy To Imagine transmitted abundant talent to her progeny, Alpha Delphini and Tangerine Trees are their sires' top-rated performers by margins of 14 and six pounds respectively. Kurious is Kuroshio's second-best runner, one pound behind Dunkerron and with promise of improving past him, while Masai Moon was Lujain's fourth-best in the northern hemisphere.

It shouldn't be entirely shocking that the mare should be such a conduit for class, even if she was unraced and bought by Matthews for just 5,200gns from a bread and butter Doncaster horses in training sale at which most of the top lots were jumps stock. She is, after all, by the Breeders' Cup Mile victor and very useful sire Cozzene out of Nell Gwyn Stakes runner-up and Coronation Stakes third Zarani Sidi Anna, a daughter of Danzig from the family of Grade 1-winning half-brothers Bates Motel and Hatim.

Easy To Imagine is also a large individual – “a good 16.2 hands and there's an awful lot of her; a big and burly mare,” Mitchell says – and she seems to have put a lot of size and power into her offspring. Fairy Falcon, Galatian and Tangerine Trees are all of sizeable proportions, although Kurious is a more compact type, Matthews having deliberately sought to bring dimensions down a little in the mare's later matings.

Another remarkable facet of Easy To Imagine's breeding career is that she produced only eight foals in total, having been covered in alternate years between 2005 and 2011 and then enduring rotten luck in recent seasons. The decision was taken to retire her in the winter, after she failed to get in foal to Casamento, Sepoy and then Mayson since 2016.

Both Alpha Delphini and Tangerine Trees are geldings, so it will be up to Easy To Imagine's daughters to extend her influence. She has just the one in production so far in Ambiguous, a seven-year-old by Kheleyf sold to Rabbah Bloodstock as a yearling for £68,000 but subsequently unraced. That mare's first foal, a two-year-old Kodiac filly, was bought by Shadwell for 80,000gns and has been named Jamaheery and placed in training with Richard Hannon.

Fairy Falcon became the most expensive of Easy To Imagine's progeny to change hands, and by some margin, when bought by Joe Foley on behalf of Clipper Logistics as a yearling for 190,000gns. But even that might just turn out to be a fair price for a smart half-sister to three high-class sprinters when it comes to breeding.

Kurious, who runs in the silks of Hot to Trot Racing, also makes for a splendid broodmare prospect. Her sire Kuroshio is by Exceed And Excel, an increasingly important damsire whose other daughters have produced the likes of Anthony Van Dyck and Ten Sovereigns.

All in all, Easy To Imagine has delivered the winners of 40 races who have between them earned more than £870,000 in prize-money and she has three daughters of considerable value as breeding propositions. All for an initial outlay of £5,460 on the mare and expenditure of around £45,000 in covering fees.

“Since Kurious won at Sandown I've received a few phone calls from people saying, 'Bumble, are you really sure you can't get the mare in foal?'” says Mitchell. “I can promise you we spent a lot of time and money trying, but it just wasn't happening.”

As much as we would all like to see another offspring of Easy To Imagine storming to success in a big sprint, no one will begrudge the mare her peaceful retirement in the Lincolnshire Wolds.

Salcey Forest Stud relocates to new base in Warwickshire