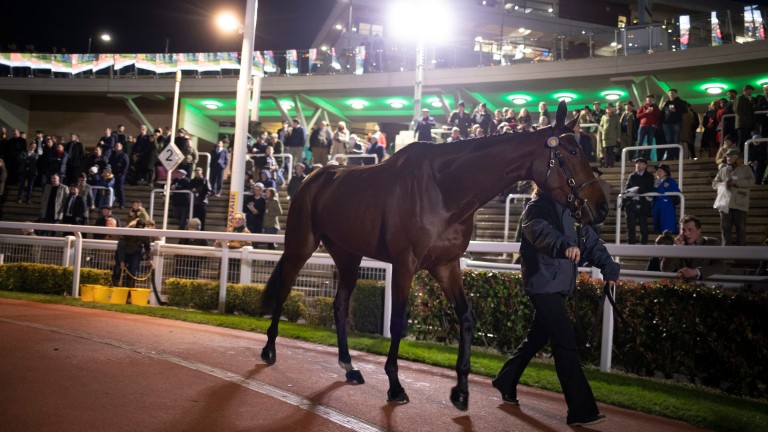 There was a remarkable windfall for one of the National Hunt’s younger practitioners at last year’s Tattersalls Cheltenham Festival Sale and it happened again with a new record price for a jump mare in training.

Sparks had flown 12 months ago with two horses sharing top billing at £330,000, and the talking point had been Gordon Elliott’s employee Camilla Sharples gaining a stunning return on a much smaller investment in Andy Dufresne.

Northern Irish consignor Patrick Turley was to scoop the highest lot in the gathering gloom of the winner’s enclosure as his Stowaway mare My Whirlwind (lot 9), a close relative of the top-class hurdler Mister Morose, moved to Nicky Henderson’s stable for an astonishing £400,000.

Bought for €42,000 at the Tattersalls Ireland Derby Sale, she had impressed on debut in a point-to-point at Ballycahane, cruising home unopposed.

It has proved a canny move to fit in this sale with a day to run of the meeting. Not only is there a captive market of anyone who’s anyone in the sport, there have also been the displays on the track to spark Cheltenham dreams among owners, or reinforce their determination to taste the winning feeling again.

A number of agents threw their hats into the ring but it was the Tattersalls CEO Matt Mitchell who fielded the successful bid via phone.

Mitchell could only say that the buyer was "a well established owner" before revealing later that Henderson was the buyer. "It is a record for a mare," he added.

Henderson later said: "She’s for an established owner. She was absolutely lovely and we like having mares as there’s a great programme for them." 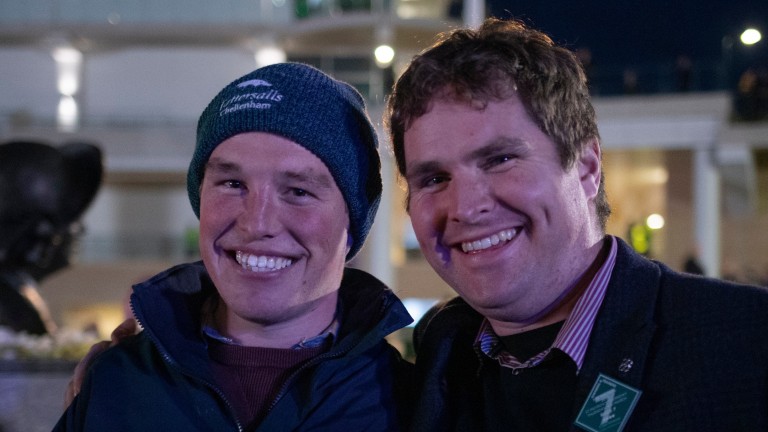 Patrick Turley (left) had fine results with both his horses offered
Patrick McCann (racingpost.com/photos)
Turley also had a handsome return on the other horse he had brought across from Kingsfield Stud, Power Of Pause (4). The son of Doyen had powered away with a maiden point at Punchestown and is from a family including some decent hurdlers. Turley had bought the chestnut with jockey Mark O’Hare for just €28,000 at last year’s Goffs Land Rover Sale and he was taken by Harold Kirk for £180,000.

"Mark’s a friend of mine and he recommended him to me," Kirk said, confirming that Power Of Pause was bound for Willie Mullins. "He won very well on his only start and he’ll make a very nice hurdler-cum-chaser."

This has been a tremendous Cheltenham for Paul Nicholls, winning a brilliant Ryanair with Frodon earlier in the afternoon, to go along with his gilt-edged novice prospect Topofthegame from Wednesday’s RSA.

A son of Brave Mansonnien, who stands at Haras de Talma for €1,500, his granddam Folklorique had produced a distinguished stream of Graded-winning hurdlers and chasers in France. Bravemansgame had booked his ticket only last weekend, taking an event at Lingstown by a convincing eight lengths success, having been a €48,000 Derby Sale graduate.

"I saw him as a store, I saw him again in January at Donnchadh’s, then I went over and watched him win at Lingstown," Malone explained.

"He really came away from them and, like all of those nice horses, has the potential to be top-class. He wasn’t bought for anyone, but we’ll get him sold."

Doyle, whose Feel My Pulse had been joint top-lot last year, also provided the third highest sale this time around in Farouk D’Alene (22), an 18-length winner at Belclare last weekend, who reached £260,000 for the combination of Mags O’Toole and Gordon Elliott.

"You’re always a bit nervous when you come here after they’ve just run, but the horses pulled out well," Doyle said. "It’s been a good sale and we’ve plenty more on the go."

With numbers running down, agent Matt Coleman was busier than ever as he flew around the paddock.

In combination with Kate Brazier, Coleman first claimed Hold That Taught (19), the British-bred son of Kayf Tara from a great family established by Robert Chugg’s Little Lodge Farm, for £220,000.

Another recent winning Irish pointer, his dam Belle Magello has been an outstanding producer and the gelding’s closely related half-sister is Banjaxed Girl, an eight-time winner including twice at Listed level, as well as placing in Graded chases. The likes of Mountain King and Gorsky Island have also performed with distinction for their mother.

"Sadly the mare is in heaven now but she’s bred me eight winners," Chugg said. "This was her last foal, but I’ve got Banjaxed Girl at home, I fed her myself this morning."

Coleman, who confirmed he had bought two horses to go to Venetia Williams, added closing lot Crypto (23) for £200,000.

The Gold Well gelding had won a Newcastle bumper for Micky Hammond earlier in the month.

"I was going on my eye really, but Crypto looked a good sort, galloping all the way to the line that day and Graham Lee was complimentary about him," Coleman said.

"Hold That Taught had recorded the quickest time of the day in his point and obviously comes from one of Richard Chugg’s best families."