Sales News TOP OF THE LOTS 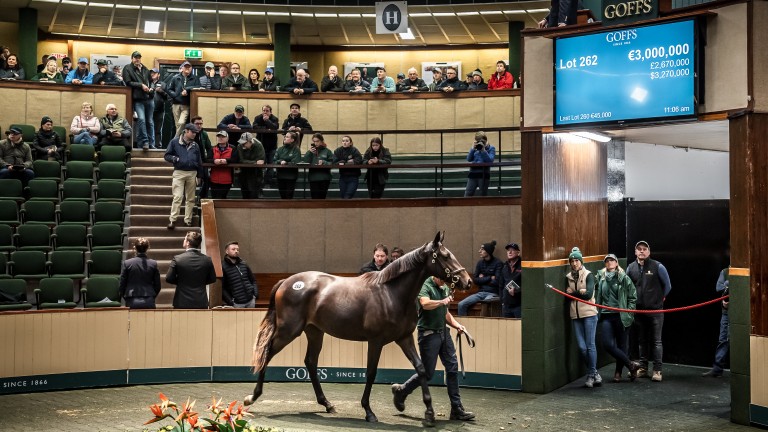 Topping a sale is one thing, but what comes next is even more important, and on Sunday we will get our first glimpse of last year's most expensive European yearling on the racecourse.

Godolphin take the wraps off Noble Dynasty, who topped the prestigious Book 1 of Tattersalls' October Sale when selling for 3,600,000gns, in the Watch Racing For Free On Betfair EBF Stallions Maiden Stakes over six furlongs at Newmarket.

The youngster's seven-figure price tag not only speaks of an impressive physique but a blue-blooded pedigree, as he is by Dubawi and out of the Galileo mare Alina, making him a half-brother to Godolphin's dual Group 1 winner Barney Roy.

Sheikh Mohammed was in attendance when his buying team secured the youngster, and after the gavel came down Anthony Stroud said of the sales-topper: "He's really athletic, a really good mover, Sheikh Mohammed picked him out and he was his favourite of today.

"Obviously we stand the stallion and he's out of a Galileo mare, he's a wonderful specimen. He cost a lot, but to get a nice horse that's what you've got to pay." 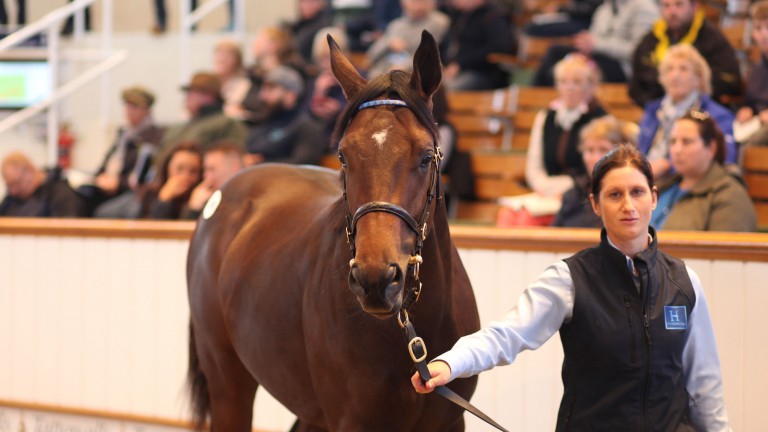 The Dubawi half-brother to Barney Roy brings 3,600,000gns in the Park Paddocks sales ring
Laura Green
Noble Dynasty formed part of Godolphin's 17,575,000gns Book 1 spending spree, with the operation's 19 purchases also including the 3,100,000gns Frankel half-brother to Golden Horn and a 2,300,000gns Kingman colt out of Grace And Favour.

The former has been named Dhahabi and the latter is as yet unnamed. Both have joined Noble Dynasty's trainer, Charlie Appleby.

Noble Dynasty was, of course, far from the only noteworthy acquisition during the most recent round of yearling sales. We run the rule over where other top lots from last year have gone.

Ecurie des Monceaux and Lady O'Reilly's mighty mare Prudenzia has made the Arqana sales ring her own in recent years, with eight of her yearlings selling in Deauville for a total of €8.195 million. Her brood includes the Group 1 winners Magic Wand, herself a €1.4m buy, and Irish Oaks heroine Chicquita.

Godolphin added to that sum last year when Anthony Stroud went to €1.625m for Prudenzia's daughter by Dubawi. Since named Philomene, the regally bred youngster has gone into training with Andre Fabre, with France Galop recording that Monceaux and Lady O'Reilly's Skymarc Farm have each retained a 25 per cent share.

Having signed the docket in Deauville, Stroud said: "She's a very nice filly with an amazing pedigree, she comes from a great stud farm and is by a wonderful stallion in Dubawi. Hopefully she'll be a good racehorse and in time she can be a very nice addition to Godolphin's broodmare band."

The Goffs UK Premier Yearling Sale in Doncaster has undergone something of an image update in recent years, with the auction now offering a selection of more later-maturing, Classically-bred stock than has historically been the case.

This evolution was illustrated in no uncertain terms when Coolmore set a Premier Sale record when going to £440,000 for the Kingman colt out of Shamandar offered by Hillwood Stud on behalf of Bob and Pauline Scott of Parks Farm Stud.

The sale has witnessed back-to-back record-breaking top lots, after Sackville Donald went to £380,000 for the Gleneagles colt out of Lady Eclair in 2018. 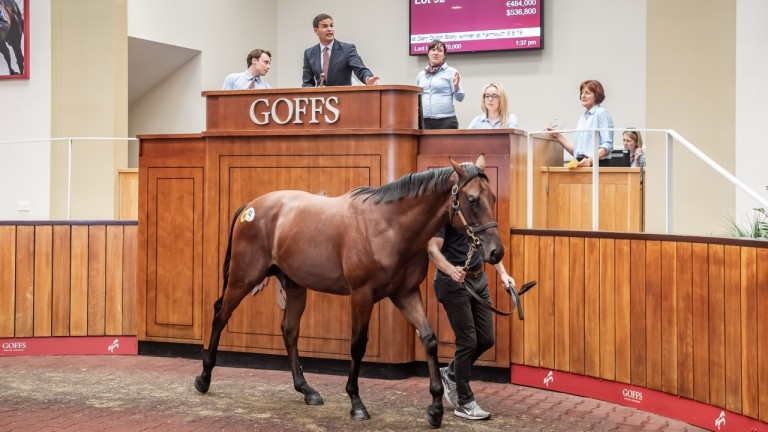 The record-breaking Kingman colt sells to Coolmore for £440,000 at Goffs UK
Sarah Farnsworth
After signing the docket on behalf of MV Magnier, Coolmore's British representative Kevin Buckley said: "Obviously we've been very impressed with what Kingman has achieved at stud to date, so much so that we've bought into Calyx, who'll be standing at Coolmore next year.

"The general consensus among the team was that they were very impressed with the horse when they saw him this week so we're delighted to get him."

The colt, who shares his damsire with Coolmore's Derby winner Anthony Van Dyck, has gone into training with Aidan O'Brien and currently hold and entry in the Goffs UK Premier Yearling Stakes at York in August.

Coolmore know all about Green Room and her daughters by Galileo, having won Group 1s with Together Forever and Forever Together, and the Irish powerhouse were clearly keen to secure the mare's most recent offering at public auction when outpointing Godolphin at €3m for another filly by their perennial champion sire.

Green Room has been an incredible producer for breeders Vimal and Gillian Khosla, not only producing Together Forever and Forever Together, but also the Group 1-winning Lord Shanakill and Do You Love Me, who topped the 2018 Orby Sale when bought by Phoenix Thoroughbreds for €3.2m.

In total, Green Room's progeny have brought yearling receipts in excess of £8m, having been bought from Keeneland for $240,000 in January 2006, just two months before she foaled Lord Shanakill. 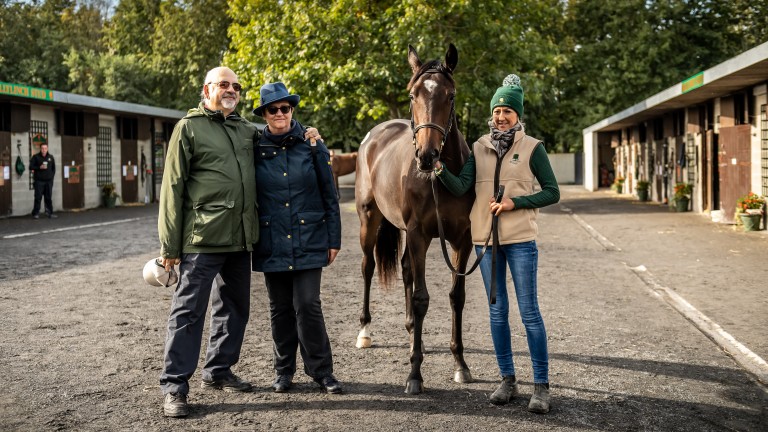 Vimal and Gillian Khosla with their Galileo filly out of Green Room
Sarah Farnsworth
Having signed the docket, Magnier said: "Firstly I would say that I’m delighted for Vimal and Gillian. It's a great result for them and they've been rewarded for putting a lot of faith in Galileo over the years.

"Obviously it's been a very lucky family for us already with Together Forever and Forever Together, and this mare has produced another Group 1 winner in Lord Shanakill, so she's an outstanding producer. We are lucky to be able to buy a filly like this as she really is a collector's item."

The filly, who has reportedly joined the ranks at Ballydoyle, was signed for in partnership with Georg von Opel's Westerberg, who also bought the Orby Sale's second-top lot, the €2.2m Galileo sister to Alice Springs, who has since been named Magic Hour.

Von Opel's investment in the thoroughbred industry bore its first notable success on Friday when Miss Yoda carried his colours to victory in the Lingfield Oaks Trial.

Hamdan Al Maktoum's Shadwell operation has been a big supporter of Book 2 of the October Yearling Sale down the years, so it was appropriate that the sale's record-priced lot is now set to carry his famous blue and white silks.

Angus Gold, Shadwell's long-serving racing manager, was forced to go to 1,050,000gns to secure the Dark Angel filly from the family of King's Stand and Temple Stakes heroine Cassandra Go, making her the first seven-figure lot at Book 2. 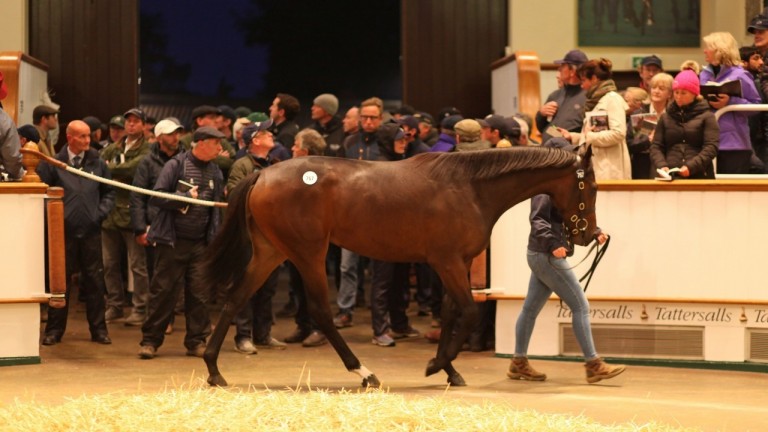 Gold also revealed he had been on the phone to Sheikh Hamdan during the bidding, and added: "I promise you I wouldn't have bid that much off my own back!"

The filly does not hold any entries yet but is registered as being in training with William Haggas.

While Noble Dynasty may have been the most expensive yearling in Europe in 2019, the priciest in the world was sold in Kentucky when Mandy Pope of Whisper Hill Farm went to $8.2m for the American Pharoah filly out of Clarkland Farm's blue hen Leslie's Lady at the Keeneland September Sale.

The filly - a half-sister to multiple champion racemare Beholder and the Grade 1 winners and stallions Into Mischief and Mendelssohn - has since been named America's Joy.

Godolphin's global buying spree also took in the top lot at the BBAG Yearling Sale in Baden-Baden, where Sheikh Mohammed's operation set a new auction record when they gave €820,000 for the Sea The Stars filly out of the Listed-placed Anna Mia.

The filly, who remains unnamed but is in training with Charlie Appleby, was consigned by Gestut Brummerhof, who held the 12-year-old record for the previous high price of €710,000.

Mick Kinnane was in action at the Tattersalls Ireland September Yearling Sale in Fairyhouse, where he went to €165,000 for the No Nay Never colt out of Rio's Pearl on behalf of the Hong Kong Jockey Club. The Mount Eaton Stud-consigned lot is now due to be reoffered in Hong Kong in 2021.

The Tattersalls Ascot Yearling Sale saw a £50,000 top lot in 2019, with Aidan O'Ryan, Middleham Park Racing and Richard Fahey combining to secure the Showcasing filly out of Hot Secret from Whitsbury Manor Stud. Named Keeping Secrets, the filly holds an early entry to the £150,000 Tattersalls October Auction Stakes at Newmarket in October.

FIRST PUBLISHED 6:30PM, JUN 6 2020
Hopefully she'll be a good racehorse and in time she can be a very nice addition to Godolphin's broodmare band

Meadowview's midas touch on show with 140,000gns Tattersalls top lot It's Dante day at York but not as we know it as Derby focus is old news Pogo I Am the first jumps mare to win £20,000 prize under new scheme Tom VanMeter excluded from Keeneland in the wake of racist comments Met Mile hero Vekoma to join strong roster at Spendthrift Farm July Sale jewels: the bargain buys who went on to reap major rewards