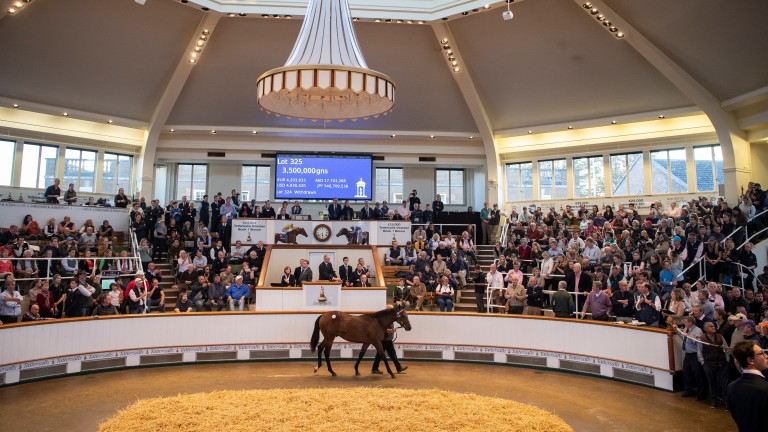 Arqana's August Sale, which kicks off in Deauville on Saturday, sees the curtain come up on another hotly anticipated round of yearling auctions. Not only does Arqana increase the excitement for what's to come, but calls to mind the horses who starred at the sales 12 months ago.

Making big money is, of course, only a small part of a young thoroughbred's career trajectory, so we caught up with connections to find out where five of 2018's sale-topping yearlings are now.

This colt boasts a truly blue-blooded pedigree, not only being a son of Dubawi but also the first foal out of Irish 1,000 Guineas and EP Taylor Stakes heroine Just The Judge.

The colt had an impressive set of physical attributes to back up his flawless bloodlines, and duly lived up to his star billing when John O'Connor of Ballylinch Stud outpointed David Redvers - who represented the colt's co-breeder Qatar Bloodstock - with a sale-topping bid of €1.4 million.

Now owned in partnership between Ballylinch Stud and China Horse Club, the youngster's other co-breeder, he has been sent into training with John Gosden. 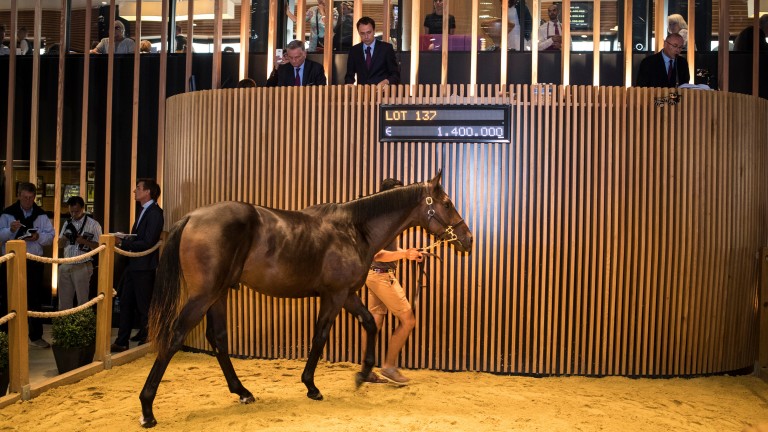 The sale-topping Dubawi colt in the Deauville ring, where he fetched ?1.4 million
Patrick McCann
It is perhaps not a huge shock he has not yet been seen out on a racecourse yet. Not only is he the product of a mating between winners of the Irish 2,000 and Irish 1,000 Guineas, but as a yearling he had size and scope in abundance, and always seemed likely to benefit from time to develop.

"He's a lovely big horse who's progressing as expected," said O'Connor. "Both his sire and dam were Classic-winning three-year-olds so that should be when he's at his best.

"He's a lovely tempered horse with a great, big loose action on him. Everything he's been asked to do so far he's done so he'll be stepping up gradually now with the aim of running in the autumn time, probably at the end of September or start of October."

Expectations were high when this colt arrived at Doncaster's flagship yearling sale, with Julian Dollar, general manager of consignor Newsells Park Stud, describing the youngster as "one of the top five nicest horses we've ever had on the farm".

Plenty of buyers shared Dollar's enthusiasm for the first-crop son of Gleneagles, including agent Alastair Donald, who saw off stiff competition from Amanda Skiffington with a winning bid of £380,000 - a full £100,000 more than the previous high mark for a yearling at Doncaster. 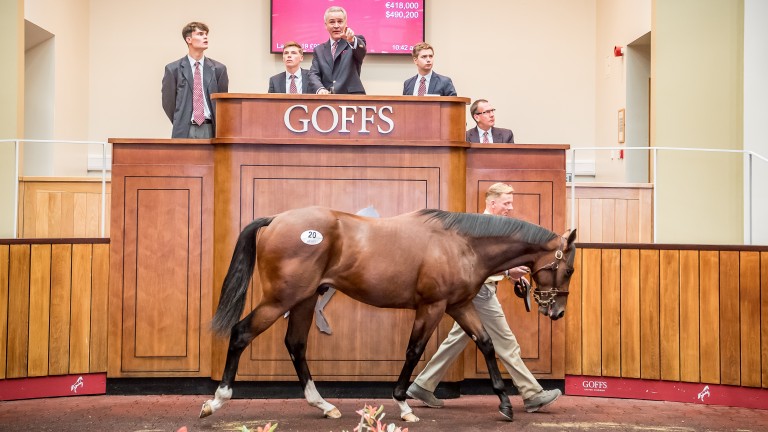 The £380,000 Gleneagles colt in the Doncaster sales ring
Sarah Farnsworth
The Premier Sale has built its reputation on supplying precocious talents, with horses such as Advertise and Tiggy Wiggy graduating from the Doncaster ring. However, we are yet to see Mahanakhon Power, with a minor injury having prevented the colt from entering full training.

"He had a small issue with his stifle and he's currently with a pre-trainer," said Donald. "He'll be going into training shortly, though there hasn't been a decision about who with yet. I'm not certain he'll run this year, he may be able to have one run in October or November but I suspect he's going to be one for next year."

Do You Love Me
Galileo - Green Room (Theatrical)
Sold by Ballylinch Stud
Bought by Phoenix Thoroughbreds for €3.2m

As a full-sister - by no less a stallion than Galileo - to Group 1 winners Forever Together, victorious in last year's Oaks, and Together Forever, this filly was always going to prove in high demand.

Even so, few could have foreseen the seismic bidding battle that ensued, with Phoenix Thoroughbreds getting the better of Coolmore at a huge €3.2m, the highest price paid for a yearling filly anywhere in the world in 2018. Moreover, that purchase came just 24 hours after Phoenix also saw off Coolmore to acquire the sister to Alice Springs for €2m. 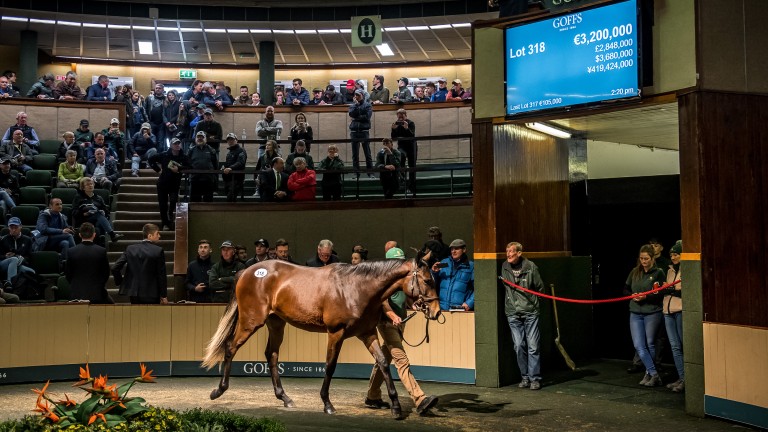 The Galileo filly out of Green Room in the Goffs ring before being knocked down for ?3.2 million
Sarah Farnsworth
Buyers of big-money lots can be coy with future plans, but Phoenix's chief executive Amer Abdulaziz announced the seven-figure filly would be heading into training in North Yorkshire with Karl Burke. The multiple Group 1-winning trainer has experience with this family, having saddled this filly's half-brother Lord Shanakill to win the Mill Reef Stakes at two and the Prix Jean Prat at three.

"She's a beautiful filly and we're very pleased with her," said Burke. "She's shown plenty of ability in her work and hopefully we'll have her on the racecourse some time in September. She shares some similarities with her half-brother, not so much in looks but in the characteristics in her temperament. She's a lovely filly."

A full-sibling to any horse standing at stud will always attract plenty of attention, and when Grove Stud offered the Kodiac brother to Adaay at Fairyhouse, Shadwell's interest resulted in a record price for the auction of €275,000.

Stephen Collins, manager of Hamdan Al Maktoum's Derrinstown Stud, did the bidding and said the hope was that one day the colt might prove worthy of a place on Shadwell's stallion roster, though noted that the horse looked likely to benefit from time to mature.

However, Shadwell's racing manager Angus Gold explained that things have not quite gone to plan since, as an accident whilst at Shadwell has meant the colt only recently entered training with William Haggas. 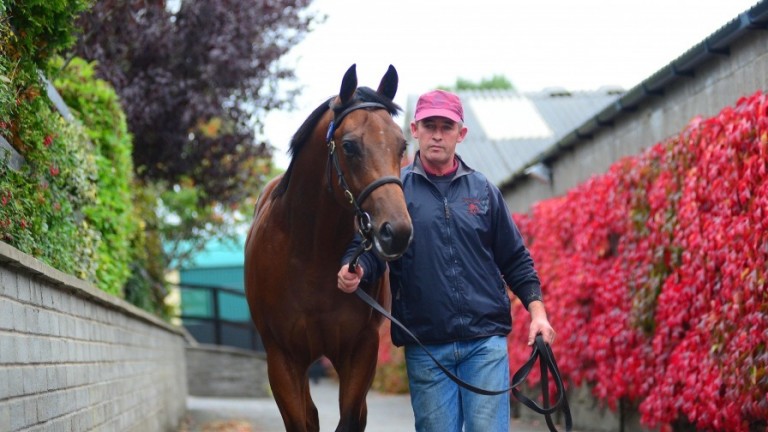 Adaay's full-brother parades at the Tattersalls Ireland sales complex
Pat Healy
"He staked himself badly on his off side and had to have seven days in the hospital, which really set him back," said Gold. "Then when I saw him in the middle of June he'd gone a bit sore of his knees so we've had to give him a bit of time, but he's now been in training for a month.

"He's a 30th of April foal and not as precocious Adaay was. When I first saw him I thought he was a bit longer than his brother and he'll be a bigger horse than Adaay. As long as things go well we'll get a run into him this year, but everything has to go right."

Lots like this one don't come along very often. The colt is a brother to Too Darn Hot, who was unbeaten, a red-hot favourite for the Dewhurst Stakes, and being hailed as the second coming when his younger brother came under the hammer.

Speculation over who would buy the son of Dubawi - and for how much - was rife, and the packed Tattersalls ring buzzed with anticipation when the colt took his turn in the famous sales ring.

An opening bid of 500,000gns looked on the optimistic side, and after a flurry of activity the price had sailed well into seven-figure territory. David Redvers, hidden away at the top of the back stairs, entered the fray late in the piece, and, having signalled the final bid with an increase of 200,000gns, landed the coveted lot. 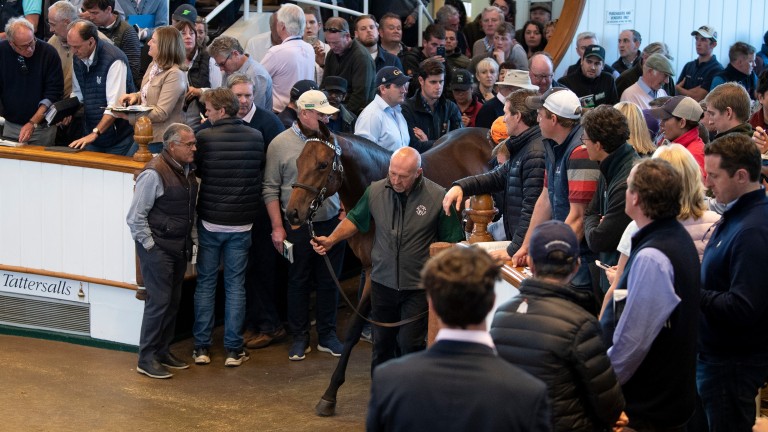 Darain: the 3,500,000gns son of Dubawi is led into the packed Tattersalls ring
Edward Whitaker
While Too Darn Hot was a champion juvenile, this colt was much taller than his brother and looked more of a later-maturing type, which stands to reason given he is out of Dar Re Mi and also a full-sibling to Lah Ti Dar.

"He's with John Gosden and his latest update was that the horse is cantering away well; he thinks he's a horse he'll want to run in October some time," said Redvers. "He's very happy with him and when I saw the horse the other day he looked magnificent.

"He's still a bit leggier than Too Darn Hot but he's become very strong and well muscled. He didn't keep growing upwards but he's strengthened and filled out nicely."