Gloucestershire stud will sell its well-related First Secretary at Tattersalls 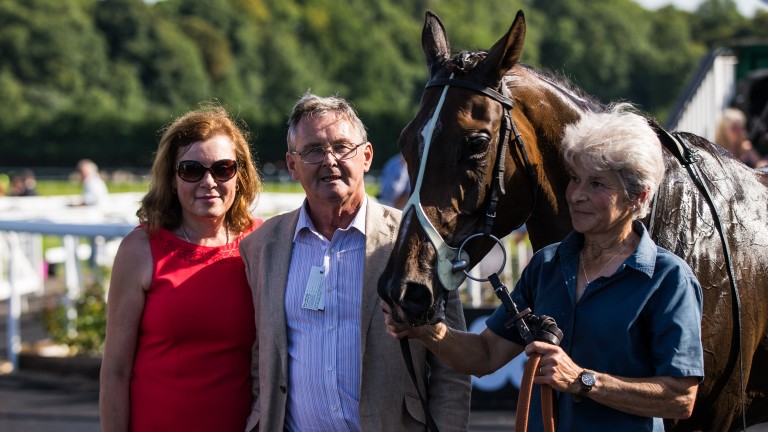 Ken Arrowsmith with wife Jan after Taws' success at Chepstow in 2017
Chepstow Racecourse
1 of 1
By Kitty Trice UPDATED 3:51PM, JUL 3 2022

When the well-related First Secretary takes her turn through the ring at Park Paddocks this week it will be an occasion for reflection for Ken Arrowsmith, whose Harts Farm Stud is cutting back on its band of broodmares.

Having bought the Gloucestershire-based operation more than 20 years ago and built it up into a working stud with wife Jan and his family, Arrowsmith is selling the 11-year-old First Secretary at the Tattersalls July Sale to bring down his group to a more select number.

First Secretary was bought by Arrowsmith for just 9,000gns from Whatton Manor Stud at the Tattersalls December Mare Sale in 2019, having won once for Roger Charlton and Lady Rothschild. She is by Nayef out of Spinning Queen, who demolished the Sun Chariot Stakes field by nine lengths in 2006. She is being offered by Jamie Railton with a Havana Gold colt foal at foot.

Arrowsmith said of the mare's breeding career so far: "We sent her to Havana Gold because of Covid as he's local, around the corner [at Tweenhills Stud]. We bought her with a view to racing and breeding from her.

"She had a very nice Havana Gold filly who didn't sell too well, she made £8,500 to Freddy Tylicki, but when I spoke to Alice Haynes she said she liked her very much."

'Reaf, who is 21 this year and looks as if she has undergone anti-ageing treatment, is defying the adage to avoid youngstock out of older mares'

An update on Taws and family from Harts Farm Stud >>> https://t.co/5N82SuINUB pic.twitter.com/f7nuRBRLB6

That filly has been named Dance Havana and according to Arrowsmith should make her debut this month. First Secretary was covered this time around by another Tweenhills sire, Lightning Spear, who recently notched his first winner.

Operating at the lower end of the market means Arrowsmith has to be more pragmatic about the team's matings, although he is confident First Secretary's covering and pedigree make her a lot to watch at the upcoming sale.

He said: "We can't afford a Frankel so we have to be selective and hope at our end of the market we've picked the right things. We've done alright so far and think she's good value for somebody."

Despite trimming his broodmare band, Arrowsmith maintained he is not quitting the game and that the team will continue to breed from reduced numbers.

Among those to have been bred at the farm is cult hero Taws, a daughter of Hernando who ran second in the Queen Alexandra Stakes and Goodwood Stakes as well as placing second in a Listed novice hurdle behind Finian's Oscar for trainers Rod Millman and David Pipe respectively.

Out of the operation's great producer Reaf, a daughter of In The Wings who was picked up for €50,000 from the Goffs November Mare Sale in 2002, Taws has a three-year-old Time Test filly named Sarah Lady, while she has a Mount Nelson two-year-old filly and a yearling colt by Blue Bresil. 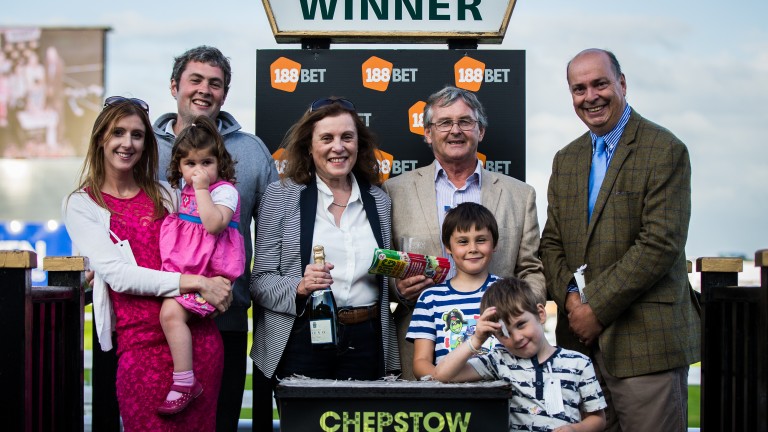 Ken Arrowsmith and his family at Chepstow
Chepstow Racecourse

He added: "I'm 68 and my wife is 67 and we are just going to ease right back so we intend to still run a few syndicates and keep two or three mares instead of five or six, but we'll still stick to trying to breed horses who stay.

"We want to race and we didn't plan to cover to the next Mehmas to get that fast and precocious two-year-old, we were more interested in going for Mount Nelson or Dalakhani, stayers essentially."

While First Secretary's date with destiny is firmly pencilled in on the horizon, Arrowsmith is also looking ahead longer-term with his new arrivals and current broodmares, including another daughter of the late Reaf and a sister to the Listed-placed dual-purpose performer Duke Of Bronte.

"We like to race our fillies, we've got two, including a filly foal by Havana Gold out of Duchess Of Bronte - she's a sister to Duke Of Bronte, who has made us really proud. Duchess Of Bronte had a colt foal by Ulysses last year who was only 38kg when he was born, there would be no point sending him to a sale so we're keeping him to race and he looks a nice prospect."

"We've also got a project mare which is one of those things you hope will eventually come right. She's by Authorized and I've got a soft spot for her as she was orphaned at birth. Even though she's costing me money at the moment it might all come right! Her back pedigree is good enough to hope."

FIRST PUBLISHED 3:30PM, JUL 3 2022
We have to be very selective and hope at our end of the market we've picked the right things. We've done all right so far and think she's good value