We have a winning grandson - another first for fantastic Frankel 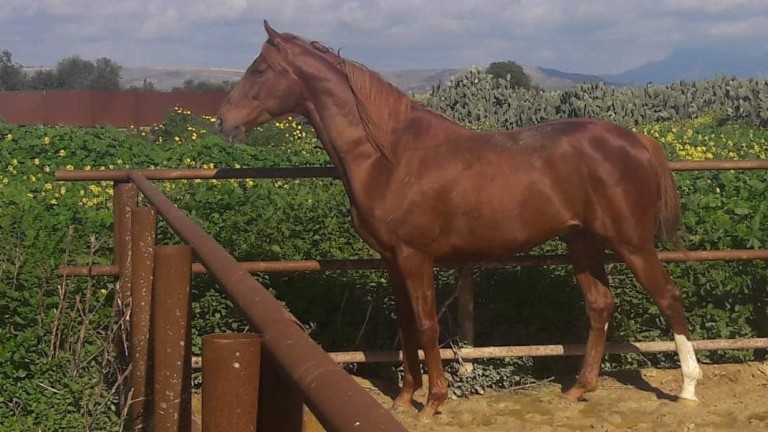 Straight Shooter: son of Frankel was supplied with his first winner on Wednesday
1 of 1
By Kitty Trice UPDATED 6:18PM, JUN 2 2021

Is it really that time already? Yep, First Shoot became the first grandson of Frankel to win when striking in Cyprus on Wednesday.

From the first crop of Straight Shooter, the Dan Haida-trained First Shoot came home a length and a half in front for a significant family success. The first runner for his sire and grandsire, the colt is out of Santa Katerina.

While his famous grandsire was retired to the plush surroundings of Juddmonte's Banstead Manor Stud in Newmarket after winning all 14 starts, including ten Group 1s, Frankel's son Straight Shooter was retired to stand at Hadjiyiannis Stud on the sunny Mediterranean island after winning his only start for Andre Fabre by seven lengths.

The seven-year-old Straight Shooter is a half-brother to Prix Jean-Luc Lagardere winner Naaqoos and was sold in a private deal by Oliver St Lawrence to long-time Cypriot owner-breeder Petros Pantelides and Nicholas Hadjiyiannis three years ago.

Bred by Serge Boucheron, Straight Shooter has largely covered the stud's own mares, but he has also serviced some outside mares for a private fee.

Pantelides said on recruiting Frankel's son: “We strongly believe Straight Shooter will upgrade the racing industry in Cyprus, and I would like to thank Mr Hadjiyiannis for his contribution to buying this horse, and also Oliver St Lawrence – nothing would have been possible without him.

2yo FIRST SHOOTER becomes the first grandson of Frankel to win. He is by Straight Shooter who I sold to Cyprus as a stallion prospect. #SireOfSires https://t.co/QlwMXi29gG @JuddmonteFarms pic.twitter.com/ShjL1peVVC

“His sire was the best racehorse of at least recent history, and he is also descended from Gaily, meaning he is related to the great Pilsudski and Group 1 winners Youmzain and Creachadoir, and there is also Naaqoos too of course."

Straight Shooter joined the likes of Cracksman, Without Parole, Elarqam, Eminent, First Eleven, Tango Fire and Sogann in becoming sons of Frankel to stand at stud.

Frankel was also recently provided with his first broodmare sire winner when Kingman colt Tolstoy struck at Yarmouth on his debut last month. The juvenile is out of War And Peace, an unraced daughter of Matron Stakes scorer Emulous.

FIRST PUBLISHED 5:04PM, JUN 2 2021
His sire was the best racehorse of at least recent history, and he is also descended from Gaily, meaning he is related to the great Pilsudski