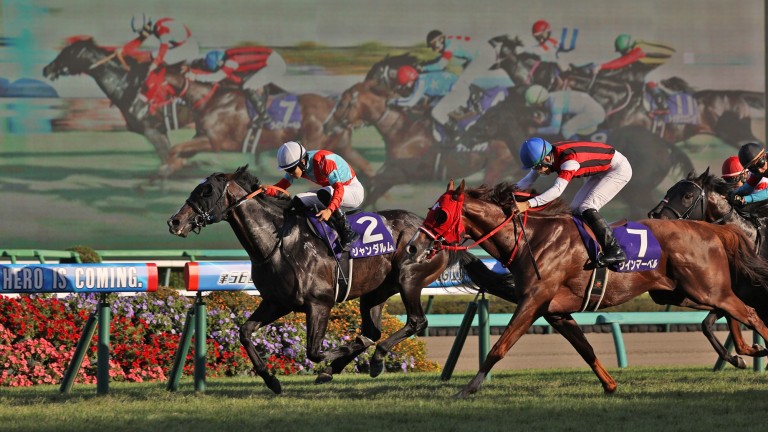 US-bred Gendarme made it a first Group 1 success - and a first for rider Kiwamu Ogino - when holding the fast-finishing Win Marvel by a neck in the Sprinters Stakes at Nakayama on Sunday.

In what is the championship contest for Japanese sprinters, Naran Huleg was three-quarters of a length back in third, while favourite Meikei Yell could manage only 14th in the 16-runner race over six furlongs.

A son of Kitten's Joy out of the Sunday Silence mare and top Japanese sprinter Believe, who was in 2003 named best older mare, the Yasutoshi Ikee-trained seven-year-old Gendarme was winning for the seventh time on his 29th start.

His dam Believe had won the Sprinters Stakes in 2002, and Gendarme is her seventh foal and the first Graded stakes winner.

Ogino said: "We got a good post position and his concerned breaking was good today. I could drive him very smoothly until the straight.

"I thought the ground was better for the frontrunner today. He ran well, and responded well to hold his rival near the finish. I did my best to make him show his ability in the straight."

"I'd like to say thank you to Gendarme, and his connections. I want to focus my energy to improve my technique."

Meikei Yell's rider Kenichi Ikezoe said: "She was little bit high tension but it is as usual, and she looked good before the start. I don't think the race was not bad for her, I can't say anything about the reason for this defeat, though it was her second race in three weeks.

"I am so sorry for the defeat given she was the favourite."

FIRST PUBLISHED 11:56AM, OCT 2 2022
He ran well, and responded well to hold his rival near the finish. I did my best to make him show his ability in the straight

Sporting artwork exhibition to feature at Tattersalls December Mare Sale Durston's sister and Havana Grey lifetime breeding right up for grabs online Remarkable tale of the owner who bought a Group 1 winner for €38,000 by accident Deal done for share in Melbourne Cup heroine Verry Elleegant Like father like son as Daiwa Major colt runs away with Mile Championship Sale of two halves at Goffs as daughter of Teofilo tops second mares session