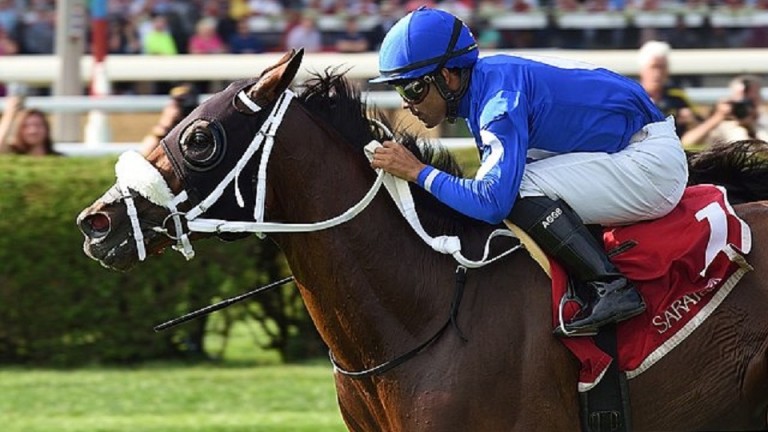 Rinaldi, a $5,000 purchase by Bond Racing Stable at Fasig-Tipton's 2016 Saratoga Fall Sale from Pope McClean's consignment, took home top honours when the five-year-old Posse gelding led throughout to take the $150,000 Grade 3 Forbidden Apple Stakes. He outlasted Value Proposition by half a length, with Delaware another neck back in third.

The victory was the first graded stakes victory of Rinaldi's 11-race career, but the result was no surprise. A winner of three New York-bred stakes, Rinaldi had also previously threatened in open stakes, leading the public to make him a narrow favourite on Friday at 2-1 odds.

He utilised his speed to dictate terms on Friday and the comfortable splits left him with enough strength to keep his rivals at bay. Rinaldi completed the distance in 1:35.70.

"He loves this course. He's a good miler," said Bond. "Two turns with a small horse, he kind of steals away on the turns. You don't realise it, but all of a sudden he's got a length on you. He's just that quick. You just hope he has something left when he hits the wire, and he did today."

Rinaldi gave jockey Luis Saez his third win on Friday, and the rider has been aboard for all four of Rinaldi's career stakes victories.

Bond won two races on Friday, both teaming with Saez, ending a slump for the trainer from the Belmont Park meet.

"This is our base," Bond said of Saratoga. "This is where we keep everything. The better horses stay up here, and we didn't have a good Belmont. But sometimes when you have a bad meet, you have those seconds and thirds turn into wins.

"You just have to keep working and keep fighting every day to turn it around. It's a humbling deal."

Trainer Chad Brown, who started three horses in the Forbidden Apple, including the runner-up and show finisher, watched his horses collect minor awards. He felt Delaware and his third entrant, Sacred Life, who rallied for fourth, were compromised by little pace.

A stalking Value Proposition "was trying to lay in, and he had every chance to draw alongside [Rinaldi], but he didn't have it today," he said.

Bred in New York by Barry Ostrager, Rinaldi is out of the winning Dynaformer mare Dynamite Cocktail. The dam has produced six winners from nine foals, including Grade-1 placed, stakes-winning Hollinger, who was champion two-year-old male in Canada in 2009.

FIRST PUBLISHED 11:49AM, JUL 17 2021
Two turns with a small horse, he kind of steals away on the turns. You don't realise it, but all of a sudden he's got a length on you