Verbal provides first US Graded winner for the departing Flintshire

Dansili stallion is on the move to France for 2022 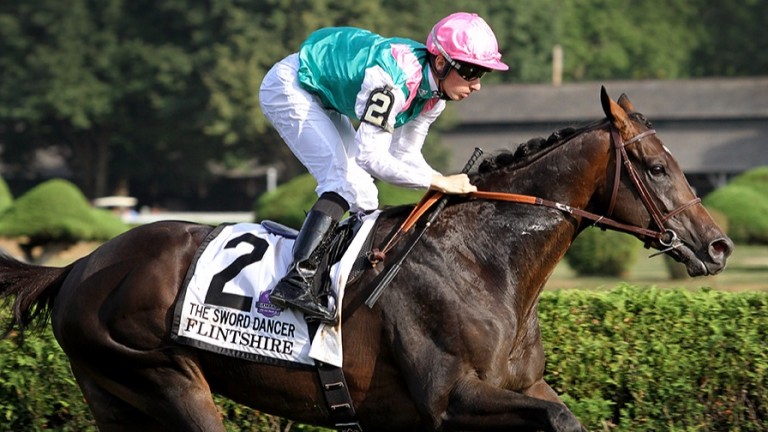 Flintshire had a very successful stint in America towards the end of his racing career
1 of 1
By Tom Peacock UPDATED 9:57AM, NOV 29 2021

No sooner had the news been announced that he was on the move to France, Flintshire claimed his first Graded winner in America through an exciting two-year-old prospect.

It seemed very appropriate that Verbal appears in the colours of Juddmonte for Chad Brown, with the leading US turf trainer responsible for the sire's impressive second chapter in his career when he won the Manhattan and the Sword Dancer Stakes.

From a decent mixed US and French Juddmonte family that includes black type performers Teletext and Seismic Wave, Verbal had made an impressive debut at Belmont in early October and crossed the country to remain unbeaten in the Cecil B DeMille Stakes at Del Mar.

#10 Verbal wins the G3 Cecil B DeMille, ridden by @jose93_ortiz, trained by @TheRealChadCBr1! Congrats to the connections!

Up next on TVG is Race 4 from Del Mar & the Pick 6 with $590k carryover & MANDATORY PAYOUT! Get involved now at https://t.co/nBYFHj6ufh! pic.twitter.com/oGjaSn8c6D

Given an unflustered ride by Jose Ortiz, the colt made progress into the straight and collared Barsabas and Cabo Spirit almost on the line to win with a bit of style.

"[Verbal] won easy last time, but that was against maidens," Ortiz told BloodHorse. "He was running against winners today, much better horses.

"I knew there would be speed in the race so, even though I had the outside post, I was able to drop over and save some ground. He came running when it counted. The boss [Brown] knows how to spot a horse. He had it right today."

Verbal is Flintshire's first Graded winner in the US, to add to a Listed win from Wild Rumour and a Group 3 in France from Cheshire Academy in the Prix Noailles.

Initially trained in France by Andre Fabre, for whom he won the Grand Prix de Paris, Flintshire is moving from Hill 'N Dale Farm to Haras de Montaigu for the new breeding season.