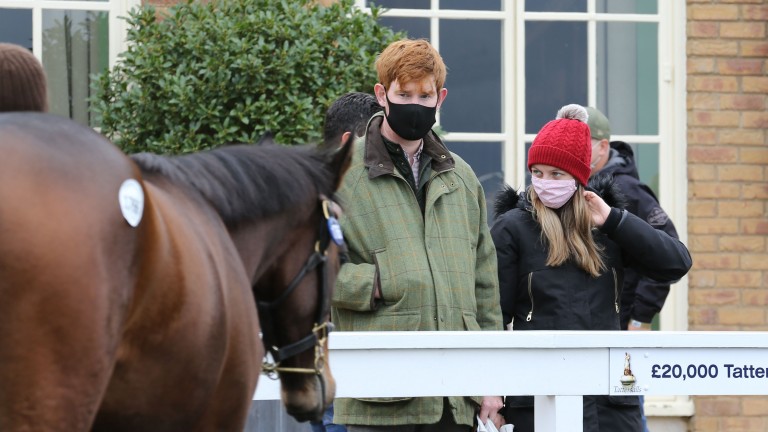 Conor Quirke and Kathryn Birch observe a yearling in the Tattersalls parade ring
Laura Green
1 of 1
By James Thomas UPDATED 11:03AM, OCT 17 2020

At last year's Book 3 of the October Yearling Sale Conor Quirke and his partner Kathryn Birch showcased their eye for future talent when they unearthed Just Frank, the four and a half length winner of the £150,000 Tattersalls October Auction Stakes. On Friday the young couple were back at Park Paddocks and on the hunt for their next classy recruit.

Just Frank was sourced with Les Eyre at a cost of 27,000gns. The son of Epaulette has repaid that investment in spades by winning two races, including the valuable Newmarket sales race, for which he achieved a Racing Post Rating of 101.

Explaining how Quirke Bloodstock came to buy the progressive juvenile, Quirke said: "Les Eyre was looking for new blood in the yard and trusted us to go out and select a few horses. We bought Bedford Flyer, a winner at Lingfield who's still unexposed, and Just Frank, who won the sales race very impressively despite being drawn on the wrong side.

"Just Frank's win was great for everyone involved; us as a young bloodstock agency and Les, who's shown once again that he can produce the goods when he gets the ammunition. His son Michael expertly handled the preparation of those two-year-olds during lockdown - I'm sure he'll be a successful trainer in his own right in time."

When asked what appealed about Just Frank as an untried yearling, Quirke explained that plenty of pre-sale research is central to their selection process. "We do a lot of work with ratings, stallions' percentages and statistics so we won't go throwing a sire off our list just because the commercial market isn't hot on them," he said.

"Just Frank is by Epaulette and out of a Cape Cross mare and had great presence and movement too. He made a lot for one by the sire but it turned out to be money well spent." 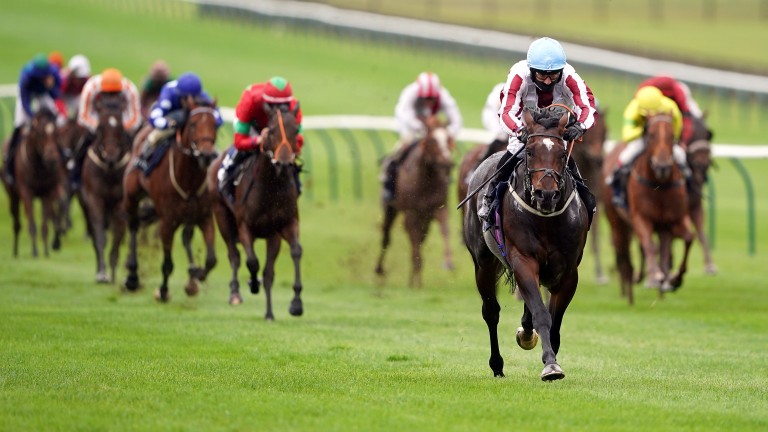 Just Frank storms to success in the £150,000 Tattersalls October Auction Stakes at Newmarket
Getty Images
Despite connections landing a bumper payday with Just Frank, Quirke confesses his own celebrations were notably restrained. He said: "In this year with our first runners, it was a relief as much as anything as we were given an opportunity and we wanted to show what we can do. I'd like to think we've done that with him.

"The Horris Hill is under consideration but I think he's capable of taking the step up wherever he goes next."

Having come up against stiff competition during much of a strong renewal of the October Yearling Sale, Quirke Bloodstock was on the mark on Friday when they secured a son of Bungle Inthejungle from Rathasker Stud at 22,000gns in conjunction with Eyre.

"Bungleinthejungle is a sire I have a lot of faith in," said Quirke. "His numbers are astonishing. He was bought for the same owners as Just Frank; Billy and Steven Parker have a real need for speed and hopefully this lad will be one for the Brocklesby!"

Despite their relatively tender years, with Quirke aged 28 and Birch 25, the pair have gained experience - and plenty of air miles - at some of the biggest operations in the global bloodstock business.

"Kathryn was in Arrowfield and I was at Yarraman Park in Australia," says Quirke. "We've worked at Haunui Farm in New Zealand, Lane's End in America, the National Stud in Newmarket and the Aga Khan Studs in Ireland. I've also spent time shadowing Tom Goff and Dermot Farrington at the sales, and Tubba Williams is probably my biggest mentor in the industry."

As well as aiming to develop their agency work at the sales, the couple also run Hunting Hill Stud in Cork. The farm's eight-strong broodmare band received a punchy update recently when Majestic Dawn ran away with the Cambridgeshire Handicap by four and three-quarter lengths. His dam, Jolie Chanson, was picked up by Quirke for just 3,500gns at the 2018 December Sale.

Hunting Hill is set to consign two lots at the December Foal Sale, namely an Acclamation half-brother to Majestic Dawn and a Footstepsinthesand colt from the family of Blue Duster.

The couple also enjoyed a notable pinhooking success earlier in the year when a Mayson filly picked up privately for just £1,500 was sold on to Chris Dwyer for 20,000gns at the relocated Tattersalls Ascot Yearling Sale.

"We've had a great time of it lately but it's not all plain sailing in the bloodstock game so you can't spend too long dwelling on the positives or the negatives, it's just about driving forward," said Quirke. "That's what we want to do with the agency work, now all we need is someone to take a punt on us."

FIRST PUBLISHED 5:29PM, OCT 16 2020
We do a lot of work with ratings, stallions' percentages and statistics