James Thomas reports from the second edition of the yearling sale 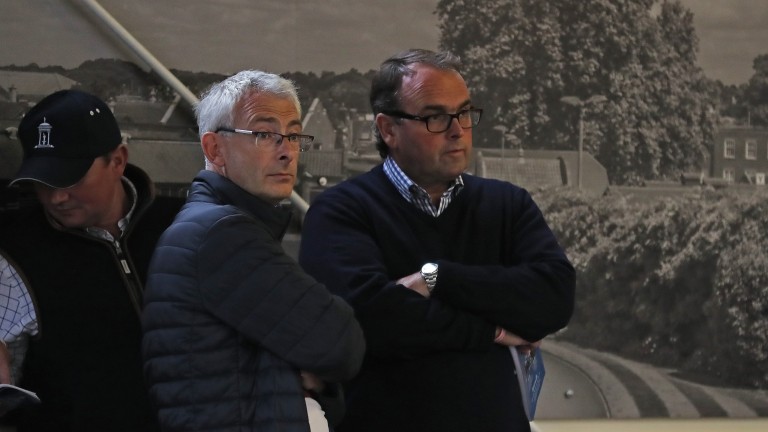 Anthony Bromley and Alan King in the bidding area in the Ascot sales ring
Debbie Burt
1 of 1
UPDATED 7:50PM, SEP 11 2018

There had been plenty of positivity surrounding the second edition of the Tattersalls Ireland Ascot Yearling Sale, which took place on Tuesday, and those pre-sale expectations gave way to a sold session of trade that was dominated by the progeny of flying first-season sire No Nay Never.

Last year's inaugural Ascot yearling sale was topped by a name more closely associated with the National Hunt sphere, with Tom Malone and Megan Nicholls signing for the top lot at £47,000.

And the trick was repeated on Tuesday when Highflyer Bloodstock's Anthony Bromley, best known for sourcing the likes of Kauto Star and Sprinter Sacre, snared the sale-topping son of No Nay Never for £46,000.

"He's been bought by Alan King," said Bromley, who was accompanied by the colt's new trainer. "We've got Just In Time, who's out of the second dam, and he's now won five races and is Cesarewitch-bound, so we've already had good luck with the family."

The colt was bred by Geoff Turnbull's Elwick Stud, and came to the auction with a sizeable update, with his half-sister Bandola having broken her maiden late last month.

"Bandola won her first race the other day, she's the first foal out of the mare so I thought that was an interesting update," continued Bromley.

"No Nay Never can do no wrong so we expected this colt to be towards the top of the market today. He walked for Ireland, so I rang Alan last night and told him that he should come and see him but that we'd have to dig a little bit to buy him.

"He's a very athletic horse and he doesn't necessarily have to be an early two-year-old for Alan."

The colt, the second foal out of the winning Halling mare Duchess Of Gazeley, was consigned on behalf of Elwick Stud by Peter Nolan Bloodstock. 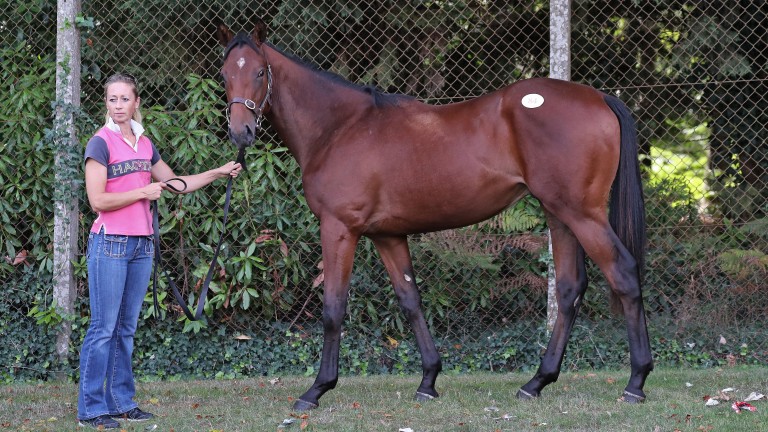 Lot 84: the No Nay Never colt that fetched a session-topping bid of £46,000
Debbie Burt

"The owners are happy, which is great as they've started a new policy of selling the boys and keeping the girls," said Nolan, who was offering his first significant draft of Flat-bred yearlings having also made his name in the National Hunt ranks.

"I'll be selling 12 colt foals for him at Tattersalls later this year. The sale is quite tough but the nice ones are making what they're worth. We're just lucky that we landed on a sire that's running hot."

Nolan went on to expand on his presence at a sale of Flat yearlings, saying: "I haven't really gone looking for it but it's grand. I'm quieter with the jumpers at this time of year and the Flat side of the industry is something I've always had an interest in having previously spent five years apiece with Joe Foley and Coolmore."

The first noteworthy transaction of the day was also for a youngster by No Nay Never, with agent Billy Jackson-Stops going to £42,000 for a filly by the son of Scat Daddy offered by Jamie Railton.

The April foal is out of Amethyst, a daughter of Sadler's Wells who finished second to Crimplene in the Irish 1,000 Guineas, having previously won a Listed trial for the Classic.

"She's very strong, looks quick, and obviously No Nay Never is really firing, be it with colts or fillies," said Jackson-Stops after signing the docket.

The filly is a sibling to six winners and is out of a sister to Coolmore's 2,000 Guineas winner King Of Kings, with Jackson-Stops citing her pedigree as a major part of her appeal.

"I really liked her, she's from a good family and has a better pedigree than a lot of horses here," he said. "I know the mare is that bit older but she's produced some really nice horses and hopefully No Nay Never can give her a bit of a lift again.

"She's been bought for Al Rabban Racing, who have a few nice horses at the moment, one with Sir Michael Stoute and one with George Scott, although I'm not sure who this horse will be trained by yet."

The Barronstown Stud-bred filly had been pinhooked by Hill Farm for €16,000 at the Goffs November foal sale.

No Nay Never has made a big impression with his debut crop of runners, with his 20 European winners headed by impressive Round Tower Stakes scorer Ten Sovereigns.

Jackson-Stops has been busy throughout sales season so far, including when signing for four lots at the Goffs UK Premier Sale.

"I've been working hard to meet as many people as I can," he said on his recently activity. "I've been doing a lot of my work with George Scott, who's been an unbelievable help to my career so far. It's pretty exciting."

Dandy day out for Doyle

Last year's Ascot yearling sale proved to be a happy hunting ground for Peter and Ross Doyle, with the father and son duo signing for the unbeaten Urban Icon and the useful Wedding Date 12 months ago.

In light of those results it was no surprise to see Ross Doyle back in action at Ascot on Tuesday, and he struck at £42,000 for a filly by Dandy Man offered by Trickledown Stud.

"I thought she was the best physical in the sale, and that's what we look for first and foremost," he said after signing for the daughter of the Listed-winning Desert Prince mare Hucking Hot, who counts Hellvelyn among her family members.

"The mare was quick and this filly looks like she will be too," continued Doyle. "She has a good attitude and is a good walker. She's been bought on spec for Richard Hannon so we're looking for an owner.

"The sale's good, there's plenty of nice horses and we were lucky here last year with Urban Icon and Wedding Date. If she's as good as them we'll be alright."

Jamie Osborne was among a host of trainers in attendance on Tuesday, and made his trip to Ascot worthwhile when picking up a daughter of Bungle Inthejungle for £36,000 through Barberini Bloodstock.

"She was probably one of the standout physicals of the day," said Osborne, who acquired the filly from Bungle Inthejungle's custodians at Rathasker Stud. "We know all about the sire, the dam was quick and she's already bred a good one, so I thought this filly made plenty of sense."

The filly is out of Lucky Leigh, a daughter of Piccolo who finished fourth behind Langs Lash in the 2008 Queen Mary Stakes and who has already produced the Listed-placed Something Lucky.

Her sire continues to lead the European first-crop sires' table by number of winners, with 22 sons and daughters having got their head in front.

"I've not had any by the sire before," said Osborne. "I avoided them last year and that was a mistake. She looks all over a two-year-old - she doesn't need to do much more growing."

When asked if he already had an owner for the filly Osborne added: "For sale would be the answer to that one!"

David Barron was the biggest spender at Ascot, signing for three lots at a total outlay of £69,000 to top the buyers' charts by aggregate.

Despite his two priciest purchases both being by reverse shuttle sires Barron said his buying patterns were more by coincidence than design.

"I just liked them as individuals," he said. "We had around half a dozen on the list and managed to buy three of them. We misfired at Doncaster and didn't get anything bought so I thought I better get myself into gear and get something."

Completing the trio of yearlings bought by the trainer was £7,000 Lethal Force colt offered by Manor House Farm Stud.

With a catalogue that had been expanded by 29 per cent to include 163 lots, there were no guarantees that key market metrics would hold up against last year's figures.

FIRST PUBLISHED 6:25PM, SEP 11 2018
No Nay Never can do no wrong so we expected this colt to be towards the top of the market today