Coronet has a yearling by Frankel, is in foal to him and returns to the champion 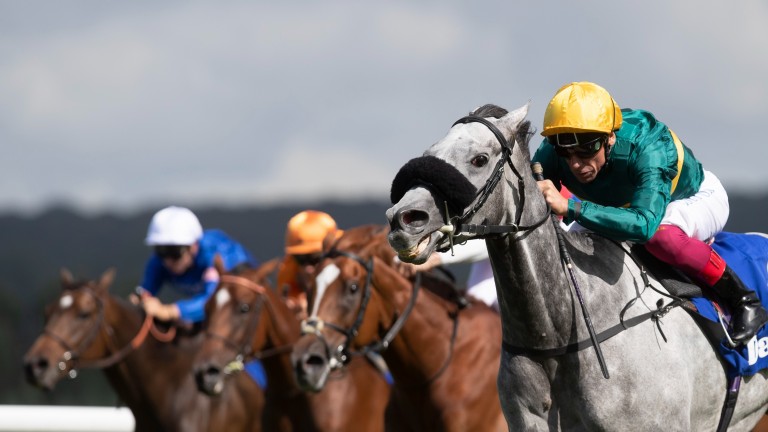 The prolific Coronet will be joined by two winning half-sisters in Prince Faisal's Denford Stud broodmare band for 2022, with the dual Group 1 winner set to visit newly crowned champion sire Frankel for a third time in succession.

Winner of the Grand Prix de Saint-Cloud, Prix Jean Romanet and Ribblesdale Stakes, and also placed a number of times at the highest level during a consistent and fruitful career, eight-year-old Coronet has taken to her second role with equal aplomb, according to stud manager Richard Evans.

Having produced a colt foal by Frankel last year, the daughter of Dubawi is back in foal to the dual world champion and will visit him again, being a cross that worked out extremely well last term with Derby and King George hero Adayar.

Evans said: "She’s developed into a lovely broodmare with a similar laid-back temperament to her granddam Last Second. She has a yearling colt who’s nicely made and looks to be very tough.

"She’s in foal to Frankel and returns to him again this year. The mating is ideal, so let’s hope for a few fillies to continue the line."

Joining their illustrious half-sister in the paddocks are winning pair Fly The Flag and Regent, daughters of Australia and Frankel who boast impeccable breeding credentials.

Fly The Flag, winner of a Chelmsford novice contest in 2019 for John Gosden, is set to visit Night Of Thunder, while Regent, a winner at Chelmsford and Lingfield last March, will visit Oasis Dream for her debut covering.

Evans continued: "Being by Australia, Fly The Flag could be anything as a broodmare. She's produced a Lope De Vega colt and visits Night Of Thunder.

"Regent was the first winner for the John and Thady Gosden training partnership. I don’t believe she really fulfilled her full potential, though she had big shoes to fill, following Coronet, but she's a very well-bred filly who should be a valuable addition to the broodmare band."

Illuminate was another high-class performer for Prince Faisal, winning the Albany and Duchess of Cambridge Stakes before finishing a half-length second in the Cheveley Park.

Despite having sadly lost her first foal by Frankel, the daughter of Zoffany has made a fine start to her second career, with her Galileo son Jasperoid winning on his second start at two for Andre Fabre and Coolmore. She is set to visit another supersire in Dubawi.

Evans said: "She was so unfortunate to lose her first foal due to a paddock accident. Her first living foal to hit the racetrack, Jasperoid, was a classy winner as a two-year-old and could go on to be a serious horse this year.

"Prince Faisal has retained a full-sister to Jasperoid, who's in training with Richard Hannon. I'd also be quite excited about her Dream Ahead yearling filly who ticks all the boxes, so the mare deserves a good mating this year."

Intrigued is the matriarch at the sprightly age of 20 and the stakes-performing and -producing daughter of Darshaan will be covered by a another fast rising son of Dubawi in Time Test, having had her two-year-old daughter of the Darley stalwart go into training in Newmarket.

"She’s been a fantastic servant to Prince Faisal and at the age of 20 is still looking very well," reported Evans. "She has the most lovely two-year-old filly by Dubawi who's going into training with John and Thady Gosden, and we’ve continued down the same route with a Night Of Thunder yearling filly."

The dam of two Cocked Hat Stakes winners, including St Leger third Michelangelo, Intrigued is expecting to Too Darn Hot before visiting the National Stud sire.

Her daughter, the winning Dubawi mare All The Rage, will visit Le Havre again after producing a colt by the French sire last year. Evans passes on that she has a lovely Nathaniel filly with "a lot of quality" in training with Jean-Claude Rouget.

He added: "Time Test’s had a tremendous start to his breeding career and looks to be producing good strong-bodied horses with a lot of quality. It bodes well for Tim Lane and the National Stud team!"

Others set to visit sons of Dubawi include California, a daughter of Azamour whose career highlight for John Gosden came when winning the Lillie Langtry Stakes, and new recruit Wordless, a Group-winning half-sister to Sea Of Class. 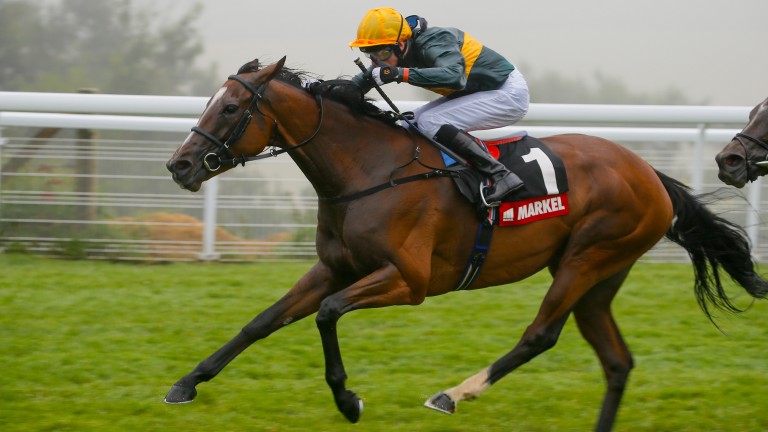 Evans said of California: "She’s producing horses with a lot of quality and very similar to herself. Her three-year-old Zoffany filly was always the pick of the paddock and her two-year-old colt by Kingman - due to go into training with John and Thady Gosden - is showing all the right signs at this stage.

"She’s in foal to Night Of Thunder and this year goes to Too Darn Hot. There are plenty of middle-distance performers in his family, but he’s compact and fast and should suit her well."

Wordless, a daughter of Rock Of Gibraltar who struck in a San Siro Group 3 for Stefano Botti, is not only a half-sister to the ill-fated Irish and Yorkshire Oaks winner Sea Of Class but also to Charity Line and Final Score, who both won the Premio Lydia Tesio when it was a Group 1, while Final Score also won the Italian Oaks.

Evans said of the ten-year-old: "She has a lovely page and being a half-sister to Sea Of Class it was a no-brainer to use Sea The Stars for two years in succession, resulting in a very attractive two-year-old filly, who's going into training with Andrew Balding, and a yearling colt. She’s in foal to Lope De Vega and will be covered by Night Of Thunder."

The high-class Jack Naylor is another young mare who looks to have her best days ahead of her, with progeny by Galileo and Sea The Stars set to emerge over the next few years. A Group 3 winner and second in the Irish Oaks for Jessica Harrington, the daughter of Champs Elysees is heading to Ireland for a date with Camelot.

"She has a very attractive Galileo filly in training with the Gosdens and a yearling filly by Sea The Stars," said Evans. "It’s still early days with her breeding career. She has some nice horses to run for her and hopefully some useful future additions to the broodmare band."

Also heading to County Tipperary is Ebony, a winning and Listed-placed daughter of Le Havre from the family of Ervedya, and Magnolea, a Group 3-placed Acclamation granddaughter of Prix Saint-Alary winner Coquerelle.

Six-year-old Ebony, who went to the United States to continue her career before being covered by Kitten's Joy, has been pencilled in for Saxon Warrior, while Magnolea will visit Australia.

"Ebony has returned home and, having not seen her since a yearling, I'm pleased to see she's developed into a gorgeous, neat broodmare," said Evans. "She’s a lovely outcross, offering plenty of breeding options in future.

"Magnolea has a very nice two-year-old filly by Frankel heading to Jean-Claude Rouget. Unfortunately she's not in foal having slipped to Gleneagles and failing to conceive to Magna Grecia, but there’s no reason why she shouldn’t get back on track this year."

Love So Deep, a Listed winner and second in the Group 2 Prix de Pomone, was a rare purchase as a filly in training. By Deep Impact, the six-year-old is in foal to Kingman and produced a filly by the sire last year. She will return to the Banstead Manor Stud resident. 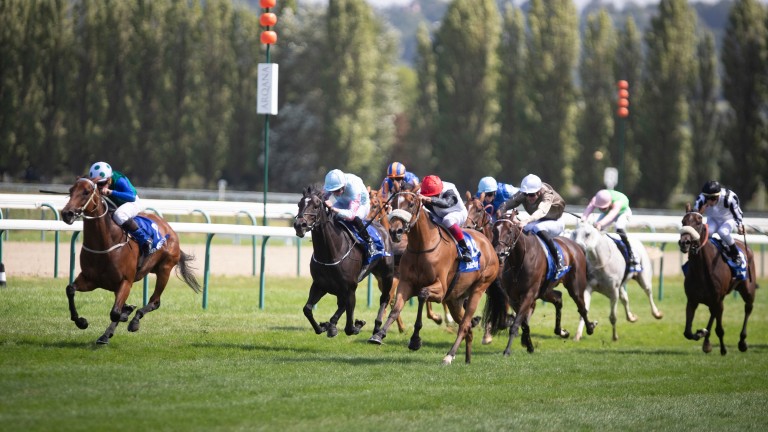 Evans said: "Her first foal really catches the eye, with good size, strength and bags of quality. If she’s a taste of what’s to come, Love So Deep could be a very exciting broodmare."

Gala is another booked in for an exciting young sire. A winning daughter of Galileo and the French stakes-placed Misk, the nine-year-old will go to Darley's record-breaking champion two-year-old Pinatubo.

"She's a good-sized lengthy mare," said Evans. "Having produced horses very similar to herself in the past, she now has the pick of the paddock with a very attractive Too Darn Hot yearling colt.

"She’s in foal to New Bay and will be visiting Pinatubo. He's a very nice horse with a lovely pedigree and plenty of raw speed, and being that little bit smaller should suit the mare well."

Cliff Wind, a winning daughter of Invincible Spirit and another granddaughter of Prince Faisal's foundation mare Last Second, is carrying to another top-class juvenile and Darley sire in Earthlight.

Evans said: "She was a winner at three and having sold the dam we were keen to continue the line with a little more influence on speed. She'll visit Dark Angel."

The aptly named Promising has a two-year-old filly heading into training this term, and the Group 3-placed full-sister to dual stakes winner Lethal Promise is booked in to visit another bona fide provider of sprinters in Dream Ahead.

Currently in foal to Iffraaj, the daughter of Invincible Spirit also has a three-year-old Nathaniel filly.

Evans was particularly positive about Bearstone Stud's new resident, adding: "I think Dream Ahead is real value for money, and he's proved more than capable of getting a good horse. Now he's standing in the UK I'm sure he'll be well supported."

Rimth, who won the Fred Darling Stakes and finished second in the Cheveley Park for Paul Cole, is pencilled in for Acclamation having produced five winners from as many runners to date. Evans is hopeful her juvenile daughter by Wootton Bassett can be the one to put her name in the spotlight.

He said of the 14-year-old daughter of Oasis Dream: "She hasn’t quite set the world alight with her breeding career so far. Having produced six colts in succession, we’re hoping her Wootton Bassett two-year-old filly will be the one to shine. She's ticking all the boxes in pre-training and looks to have a very good attitude."

The well-related Ultramarine is another new recruit and will make the journey to Lanwades Stud for a date with Sea The Moon. A €200,000 purchase as a yearling by Rouget from Arqana's August Sale, the five-year-old is a half-sister to the Listed-winning and Group-placed All Rumours and from the family of US Grade 1 winner Angara.

"She's a good looking, well-bred daughter of Siyouni out of a Deep Impact mare who won twice and was Listed-placed for Jean-Claude Rouget," said Evans.

The thoroughbred who turned 39 on New Year's Day

FIRST PUBLISHED 5:00PM, JAN 14 2022
She had big shoes to fill, following on behind Coronet, but is a very well-bred filly who should be a valuable addition to the broodmare band