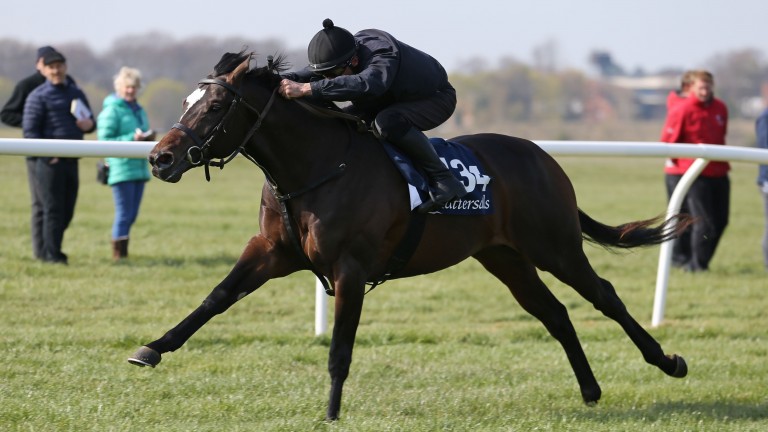 A two-year-old gallops up the Rowley Mile at the Tattersalls Craven Breeze-Up Sale
Laura Green
1 of 1
By James Thomas UPDATED 6:06PM, APR 7 2021

Around 12 months ago the unfolding Covid-19 pandemic had thrown the breeze-up season into a state of unprecedented disarray. Sales dates and locations moved to and fro as auction houses did their utmost to host the key dates in as efficient a format as possible.

The Tattersalls Craven Sale eventually brought the curtain up on a heavily disrupted season two months later than scheduled, while the Goffs UK auction was pushed back a similar amount of time and staged alongside Arqana's sale, which transferred from Deauville to Doncaster.

Despite all the challenges, trade, for the most part, proved far more satisfactory than many would have dared imagine when the disruption began, while a stream of stakes-winning graduates - horses such as Bahrain Pride, Steel Bull and Umm Kulthum - duly emerged from the salvaged sales.

The Craven Sale is also the first staging post for this year's round of breeze-up auctions and, thankfully, the industry and its key participants find themselves back on a more even keel.

Con Marnane had six lots engaged in the Craven Sale of 2020 but withdrew all but one as the sector's outlook changed almost daily. Some 12 months on he is ready to return with a full complement, with eight eyecatching lots set to strut their stuff up the Rowley Mile on Monday.

"It was a very scary time last year," says Marnane reflecting on the state of play at his Bansha House Stables in County Tipperary back in early April 2020. "We probably made a mistake as we hardly had any horses go to the breeze-up sales, we sold a few privately but we also didn't have the big numbers we usually have.

"This year is completely different. We didn't buy big numbers at the yearling sales but we've bought some absolute superstars. I've a very good team of horses and I wouldn't be shocked if a few of them rocked up at Royal Ascot." 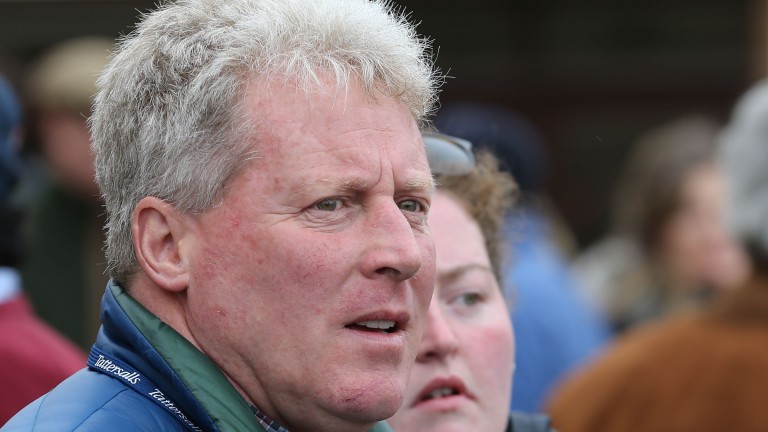 Con Marnane: "I've a very good team of horses and I wouldn't be shocked if a few of them rocked up at Royal Ascot"
Laura Green

Brendan Holland of Grove Stud in County Cork is another leading consignor heading into this year's sales with renewed optimism, not only on the grounds that things have been more straightforward this time around but because last year proved the industry was well able to rise to the challenge should the need for further adjustments prove necessary.

"There's much less uncertainty this year," says Holland. "As we speak, the first two sales are scheduled to go ahead as planned and my horses for the Craven are leaving over the next 24 hours. It's been a much simpler process this year and I also think we realised that if it did have to be changed we'd still be able to manage and the sales companies would be able to cope."

The nature of the thoroughbred auction calendar means breeze-up consignors need to source their raw materials - namely unbroken yearlings - many months before there are any guarantees about how the two-year-old sales will pan out.

Nonetheless, even after experiencing some hefty disruption in 2020, Holland says his approach to pinhooking remained unaltered.

"I kept the same mindset and restocked at the same level and same numbers that I wanted to," says the man who has sold the likes of Astaire, Stormy Antarctic and The Grey Gatsby.

"Time will tell whether I've bought the same quality of horse or not, but there was no difference in my approach. We'll let them do the talking when they do their breezes, but there looks to be some very smart horses among the bunch."

When it came to restocking at last year's yearling sales, Marnane, whose graduates include Fleeting Spirit, Prince Of Lir and Sands Of Mali, says he took a less-is-more approach. "We have way fewer numbers but we're way up on quality," he says. "We have a few that would keep you awake at night thinking about how good they could be.

"When we were at the breeze-up sales last year we didn't know whether we were going forwards or backwards and we weren't sure what way the sales would be next year. Maybe some people have big financial backing but we've got to buy and sell to make a living and pay the staff and our bills.

"We've come away [from the yearling sales] with as nice a bunch of horses as I've ever had and that gives you a great buzz. We spent a lot of time picking them out, Amy [Marnane, daughter] did a lot of the legwork finding them. We went out with the intention of going back to our old ways."

Although consignors have enjoyed a smoother run into the breeze-up sales than was the case last year, those based in Ireland, such as Holland and Marnane, have found that not only are there Covid-19 protocols to contend with before arriving safely at Tattersalls or Goffs UK, but that Brexit has made moving their horses considerably more onerous and significantly more costly. 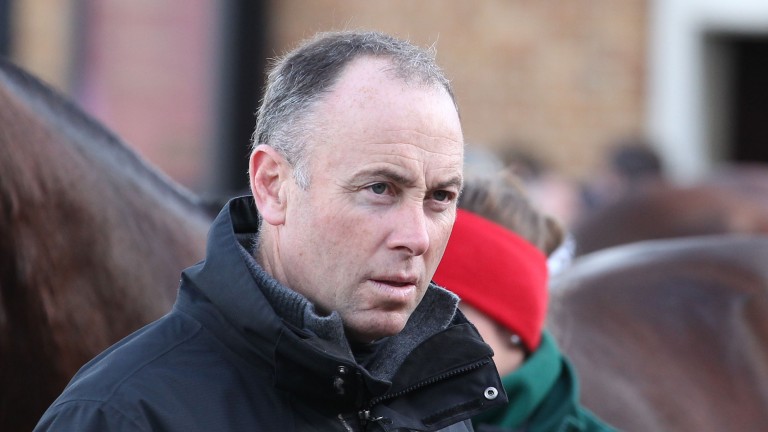 Brendan Holland: "Absolutely everything associated with Brexit is a nightmare"
Laura Green

"With the Covid situation, we're kind of used to it," Holland says. "It's still difficult and, God forbid, if you caught Covid in the middle of the sales season when you're travelling and then couldn't attend the sales, now that would be stressful.

"The cost of transporting has gone up by 75 per cent as well. Absolutely everything associated with Brexit is a nightmare, and I can't see the upside to it on either side of the Irish Sea."

Those frustrations were echoed by Marnane, who adds that delays while horses clear border posts not only puts their performance at the breeze-up sales at risk but also has the potential to pose a very real welfare issue.

"It's a nightmare and all the paperwork is ridiculous," he says. "It's wrong on everybody and something has to be sorted. My Craven horses are leaving on Thursday and I'm leaving the shipping in the capable hands of George Mullins, but it's borderline cruelty what the horses have to go through waiting at ports. There is nothing worse than a horse getting travel sickness." 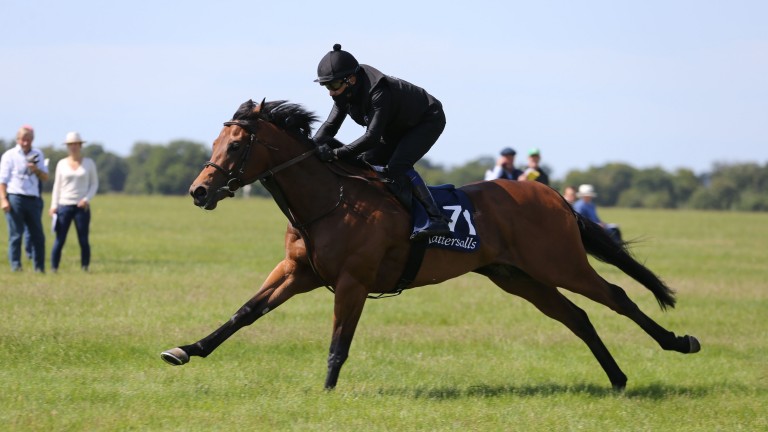 Bahrain Pride breezes at the 2020 Craven Sale, where he was consigned by Church Farm & Horse Park Stud and bought by Stroud Coleman Bloodstock for 300,000gns
Laura Green

Marnane feels that all the increased hassle of moving horses will prove worth it, however, with the appeal of owning a racehorse, particularly one capable of competing at Royal Ascot, undimmed by lockdowns and Brexit woes.

"I think this year will be a good year, that's my gut feeling," he says when asked about his expectations for trade. "People are chomping at the bit to get back, there's only so much watching television or walking the dog you can do! We've had a lot of phone calls from agents and trainers looking for horses.

"Obviously they can't come and look but I've put them right. Tattersalls have done a fantastic thing with the Royal Ascot bonus too. Hopefully if buyers look at our track record they'll see they've got a chance."

Holland says he tends not to concern himself with market predictions but shares Marnane's hope that Tattersalls' new Royal Ascot/Group 1 bonus will prove a draw to buyers.

The bonus pays £125,000 for the first Craven graduate to win any of the six two-year-old races at the royal meeting and the same to the first winner of any of the 15 European Group 1 races open to two-year-olds in 2021. This runs in tandem with the popular £15,000 Craven bonus scheme. 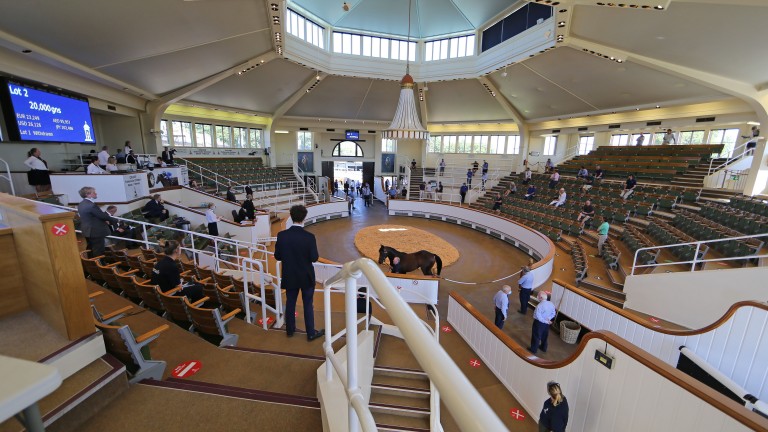 "I never spend a whole pile of time wondering how trade is going to be as I'm too consumed by getting the horses to the sales in one piece," he says. "Regardless of trade, if your horse breezes well you'll sell well, but no matter how good trade is, if your horse doesn't breeze well, you won't get paid.

"It'll be interesting to see the effect, if any, that the Craven bonus has - I hope that has a positive effect. I know the other sales companies are working hard too. Last year, in a horrendous year, the individual number of buyers increased by 20 per cent, which was baffling in some ways but shows the sector is getting more and more exposure."

Holland adds that nothing drives demand like racecourse results, and that is something the breeze-ups sales have plenty to boast about.

"The dynamic of the whole breeze-up sector is changing on an upward curve," he says. "This week alone we've had two very smart three-year-olds make their appearances; Spycatcher won at Pontefract and the day before the Crisfords' Ilza'Eem was very impressive at Redcar.

"Regardless of economic conditions, what keeps driving the sector is the results on the racetrack, and that's only going to go in one direction as there are better horses being presented every year."

FIRST PUBLISHED 5:00PM, APR 7 2021
I never spend a whole pile of time wondering how trade is going to be as I'm too consumed by getting the horses to the sales in one piece