'The children especially enjoyed feeding the horses, they loved their visit' 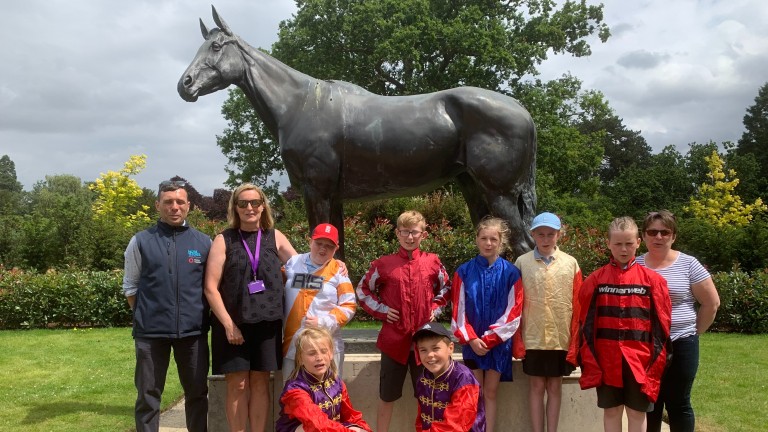 The group from Weasenham Church of England Primary Academy in front of Estimate's statue
Racing to School
1 of 1
By Bloodstock World staff 2:18PM, AUG 5 2022

Racing to School had the aim in this Platinum Jubilee year to inspire a connection with horses in the next generation through an unforgettable day of learning at the Royal Studs.

Their aim became a reality when Year 5 and 6 pupils of Weasenham Church of England Primary Academy took the short trip across to the Sandringham Estate.

Despite their rural location, for some of the pupils their Education Programme Day with Racing to School at Fakenham racecourse in May had been the first time they had even seen a horse.

The county of Norfolk was included in the government’s list of Education Investment Areas earlier this year, and Racing to School is committed to supporting as many schools as possible in the region, especially given the loss in recent years of opportunities for learning outside the classroom.

Only a small number of people are invited each year to look behind the scenes at the Queen's stud, and learning about the thoroughbred breeding season and the daily routines that provide the best possible care for each horse were key objectives of the day.

The group met the stud’s veterinarian and farrier, who both talked passionately about their jobs and how their hard work had led them to careers they love.

The highlight of the day was always likely to be the chance to meet some of the Queen’s horses, and the pupils were shown how to approach the mares and foals, and to read their body language. Carrots helped the bonding process.

Weasenham Primary Academy’s Sarah Arthurton said: “We felt privileged to be able to come to the stud, and David [Somers, stud manager] was fantastic. The children especially enjoyed feeding the horses, even telling their class teacher once back in school that horses eat carrots and polo mints!

"We'd like to again thank Racing to School so much for giving us the opportunity. The children loved their visit.”

Weasenham pupils were also made aware of the patience required by those working with horses to learn their traits, to understand what environment suits them best, and to then prepare them to become as successful as possible on the racecourse.

At Sandringham, two lucky youngsters had the chance to wear the famous royal silks as the group walked through Sandringham Estate’s grounds and on up to the statue of the Queen's Gold Cup-winning heroine Estimate.

To learn more about Racing to School, click here

FIRST PUBLISHED 2:18PM, AUG 5 2022
We'd like to again thank Racing to School so much for giving us the opportunity