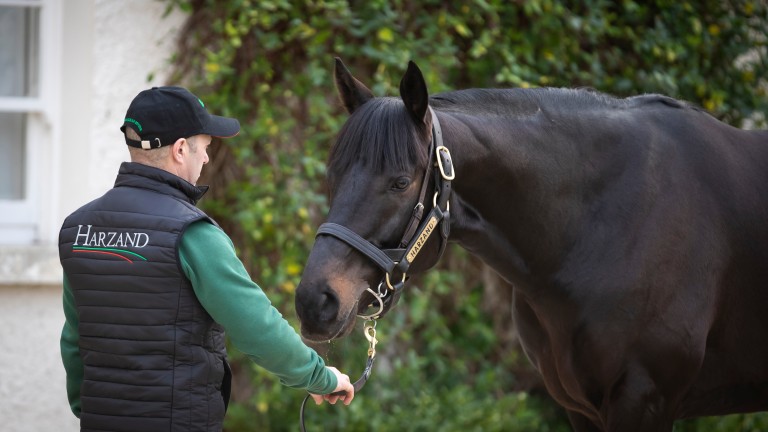 Harzand, the Aga Khan's homebred dual Derby winner and Gilltown Stud resident, has been sold and will stand at Kilbarry Lodge Stud in County Waterford as a National Hunt stallion.

The son of Sea The Stars was retired to stand alongside his sire in 2017, having won at Epsom and the Curragh in a fruitful campaign for his owner-breeder, Dermot Weld and the late Pat Smullen in 2016.

Placed fifth on his sole start at two, Harzand began his Classic season with a 16-length success in a Cork maiden before his first Group win in the Ballysax Stakes at Leopardstown, defeating the smart Idaho by a length and a quarter in the process.

His Epsom heroics saw him beat the likes of Idaho, Cloth Of Stars, Ulysses and Massaat, before he confirmed that form with a half-length score over Idaho in the Curragh equivalent later that month.

He was struck into when favourite for the Irish Champion Stakes on his next start, and also finished mid-division in the Prix de l'Arc de Triomphe behind Found on his final run.

One of Harzand's best offspring on the Flat is French Fusion, a filly who was a winner and twice Listed-placed for Jim Bolger, while in recent seasons he has been represented by the progressive three-year-old Mostly Cloudy, who won his fifth consecutive race of 2022 at Ascot last month, and four-year-old Soapy Stevens, a dual winner this term.

Also among the nine-year-old's first crop of four-year-olds is Kolisi, a three-time winner over hurdles this year for David Pipe, and Gaoth Chuil, a 14-length winner of a Tipperary bumper in June.

The Aga Khan Studs’ dual Derby winner #Harzand has been sold and will continue his career at Kilbarry Lodge Stud in County Waterford https://t.co/fiLUjLmopq pic.twitter.com/Rk7aOtkNQQ

Harzand's third crop of runners has recently been well advertised by two-year-old filly Kayhana, who made an eyecatching winning debut for the Aga Khan and Weld at Limerick in June.

Pat Downes, director of the Aga Khan Studs in Ireland, said: “Harzand has sired some useful individuals from his initial crops conceived at Gilltown Stud, the oldest of which are now four-year-olds.

"However, in recent years he has predominately been supported by the National Hunt division and now moves to Con O’Keeffe’s Kilbarry Lodge Stud, where I'm sure he will continue to do very well, given he has stock yet to race out of some talented National Hunt racemares and broodmares."

O’Keeffe, owner of Kilbarry Lodge, said: "We are thrilled to acquire a horse of the calibre of Harzand. A dual Derby winner by the sensational Sea The Stars, he has the physical attributes, race record and pedigree that Irish breeders want in a National Hunt stallion.

"I have been in touch with Pat Downes over the past few years regarding purchasing this horse, and my interest was strengthened on seeing the quality of his foals at the last two years of National Hunt foal sales.

"A tough, talented racehorse who has great bone and presence, Harzand has all the qualities to be an exceptional National Hunt stallion."

FIRST PUBLISHED 10:22AM, AUG 4 2022
In recent years he has predominately been supported by the National Hunt division and now moves to Con O’Keeffe’s Kilbarry Lodge Stud