Hammer comes down at 150,000gns for talented sprinter at Tattersalls August Sale 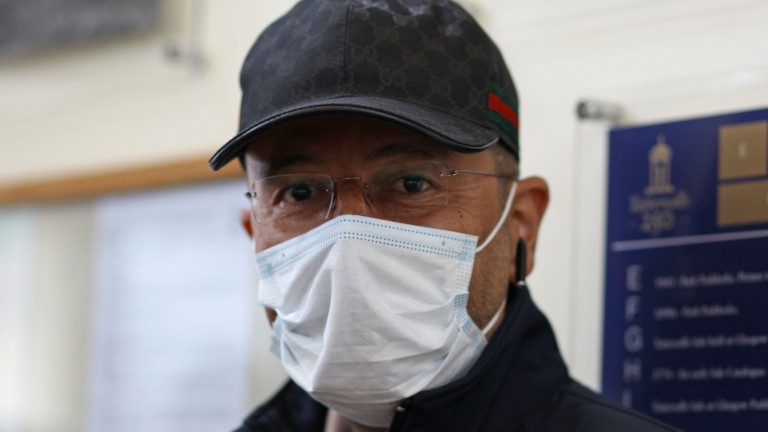 Trade went up a gear during Tuesday's session of the Tattersalls August Sale as Oliver St Lawrence and Fawzi Nass secured the top lot, the talented sprinter Swindler, at 150,000gns.

International trade has been a key feature of Tattersalls' newest sale, and Bjorn Nielsen's homebred son of Invincible Spirit is now set to continue his racing days in the Middle East.

The four-year-old, who is out of a Selkirk half-sister to Sprint Cup heroine Tante Rose, ran eight times for Ed Walker, winning twice and achieving a peak Racing Post Rating (RPR) of 104. He was last seen running fourth behind Summerghand, beaten a length and a half, in the Stewards' Cup at Goodwood.

"The plan is he'll go to Bahrain," said Nass. "That will be his base and if he progresses well enough he could race in Dubai or Saudi Arabia too."

Swindler has no shortage of talent but is not without his idiosyncrasies, and Nass joked: "We've just bought ourselves a lot of trouble!

"He's obviously a very talented horse though when things go his way. We know he's got a lot of ability and fits the bill for what we were looking for as he likes fast ground and usually comes from off the pace." 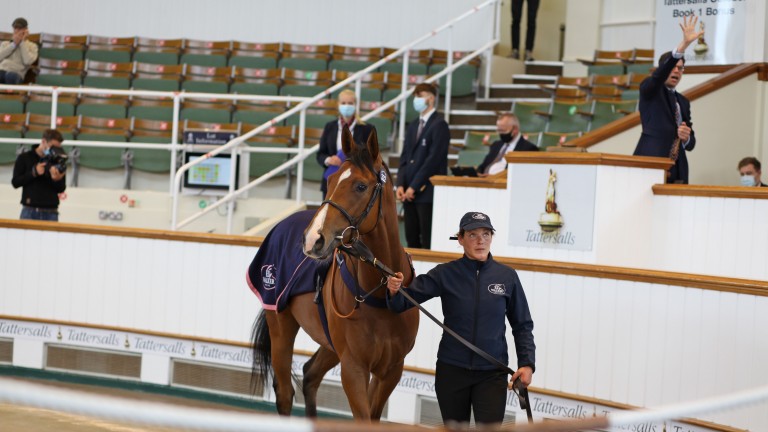 Swindler takes his turn in the Tattersalls ring
Laura Green
On potential future targets, the owner-trainer said: "There's a few races for him in Bahrain. There was a plan to have a sprint at the International meeting but I don't think that is going to happen this year. There is also a decent sprint race in Saudi, which is just across the causeway."

Later in the session St Lawrence and Nass also went to 75,000gns for the 98-rated Deep Intrigue, who was offered by The Castlebridge Consignment on behalf of Clipper Logistics.

Other notable lots set to ply their trade abroad are Desert Highway, a Moyglare Stud-bred son of Dubawi who went the way of leading Qatari trainer Gassim Ghazali for 82,000gns, and Shared Belief, who went to internet bidder CH Wong at 80,000gns. Shared Belief is set to be trained by David Ferraris in Hong Kong.

Also heading abroad is Whisper Not after Jamie Lloyd landed the son of Poet's Voice on a bid of 90,000gns. The three-year-old colt has won his last two starts for Richard Hannon, including a Pontefract maiden by a yawning 20 lengths.

"He's been bought by me and David Meah for a good client called Chris Dunn, who we bought Lady Prancealot for," said Lloyd. "The plan as to where he'll go hasn't been decided yet but he'll head to America, most likely the West Coast. I'm very happy to get him as I thought we'd have to pay a bit more."

Whisper Not, who changed hands with a peak RPR of 87, made his third visit to the sales ring his most lucrative, having fetched €20,000 as a yearling and just 4,000gns as a foal when pinhooked by Timmy Hillman.

"He's a horse with a lot of pace and I think America will really suit him," added Lloyd. "Hannon thought he'd be well suited to America and he's a fine, strapping horse as well. He could probably drop back to a mile over there."

Drafts from Juddmonte Farms always prove popular and the 21 lots Khalid Abdullah's operation offered at Tattersalls on Tuesday duly sold for an aggregate of 552,000gns, an average of 26,286gns and a median of 22,000gns.

The pricest of those lots was Georgeville, a four-year-old son of Dawn Approach who was signed for by Gaelic Bloodstock after owner David Spratt struck a winning bid of 75,000gns online. Georgeville had looked a useful performer at three for Dermot Weld, including when winning two races and running third to Buckhurst in a Curragh Group 3. 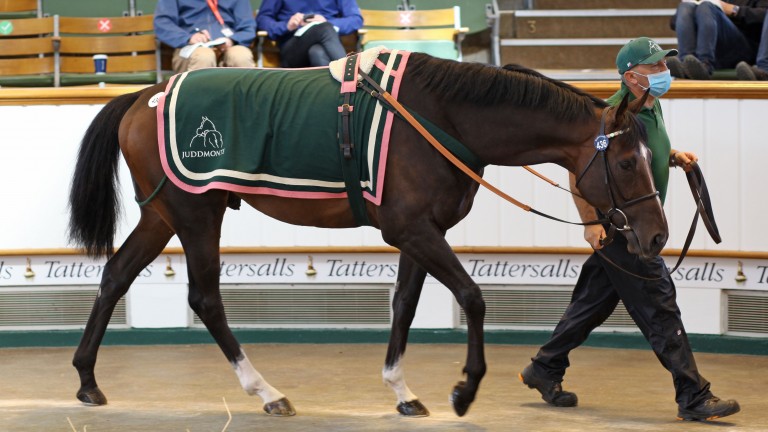 Georgeville takes his turn in the ring before being knocked down to David Spratt for 75,000gns
Laura Green
However, his form has dipped this season and he was last seen finishing 16th of 18 in a Galway handicap off a mark of 103. Spratt indicated that no plans had been put in place for Georgeville.

Richard Hughes also dipped into the Juddmonte draft and went to 50,000gns for Prince Imperial, a three-year-old son of Frankel who won one of his four starts for Sir Michael Stoute.

The colt was last seen finishing an eyecatching fifth in a Chelmsford handicap over a mile and a quarter.

Hughes said: "I thought he might make a bit more coming from Juddmonte and being by Frankel. I watched him run last time and liked what I saw."

Pistoletto ran 11 times for O'Brien and the Coolmore partners and achieved an RPR of 105 when he finished a neck second to Good Vibes in last season's Cornwallis Stakes.

"You don't see horses of that calibre coming up in a mainstream sale very often but I'm very excited to have a horse of this quality in the yard," said Ryan. "He's already proven on different ground and when he won he actually lost a shoe behind, so there's reasons to think the horse could have a bit of improvement to come. 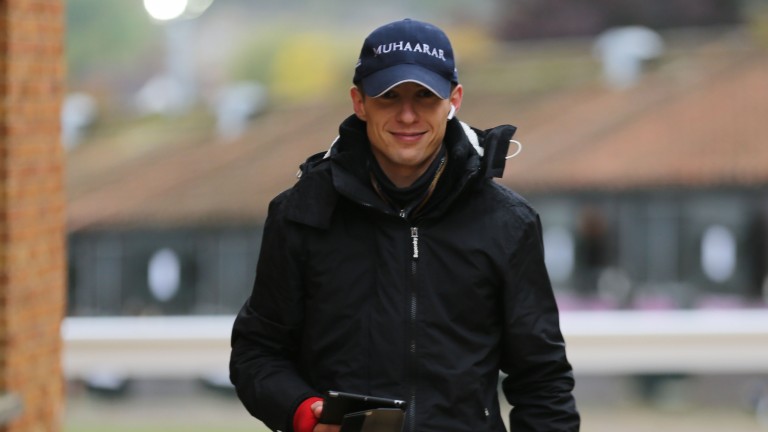 Jamie Piggott: bought Pistoletto with trainer John Ryan
Laura Green
"A few of my top owners have clubbed together to buy him and we're very happy to have him. Hopefully he can be a flagship horse for the yard."

The colt is a brother to the two-time Grade 1 winner Avenge and traces his family back to the likes of Mark Of Esteem. Pistoletto has run four times since racing resumed, including when a respectable eighth of 16 in the Group 1 Commonwealth Cup, but his new trainer said no grand plans were in place for his purchase's next outing.

"There's no immediate plans," said Ryan. "He's had quite a bit of racing in a short space of time so we'll just get him home and make a plan from there. Obviously the issue at the moment is that making a plan isn't easy, but the bigger picture for a horse like this is next year."

Online bidding has had a major hand in proceedings over the first two sessions of the August Sale and by the close of trade on Tuesday Tattersalls reported that over 200 of the 372 offered lots had received an online bid.

The sales company also said over 100 of the sold lots had either been bought online or underbid by someone participating via the internet.

The inaugural Tattersalls August Sale concludes on Wednesday with a session beginning at 10am.

Excitement builds as Tattersalls unveils catalogues for Books 2, 3 and 4

FIRST PUBLISHED 6:46PM, AUG 25 2020
You don't see horses of that calibre coming up in a mainstream sale very often