Swift profit for Fayathaan after topping day two of February Sale at 85,000gns

Session-topper was last seen scoring in a Wolverhampton handicap 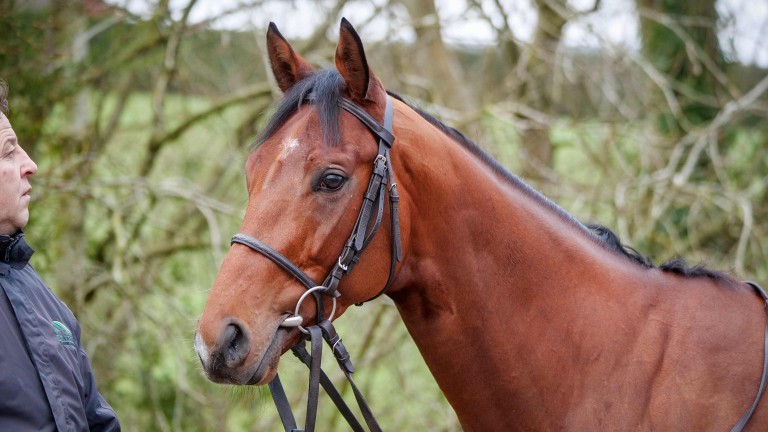 Recent form came to the fore on day two of the Tattersalls February Sale on Friday, with the concluding session of live online trade headed by Wolverhampton scorer Fayathaan, who is bound for Italy after drawing a bid of 85,000gns from Marco Bozzi.

Catalogue updates are generally a major asset at horses-in-training sales and the progressive three-year-old had enhanced his profile when registering a third career success at Wolverhampton just ten days before coming under the hammer.

Bozzi said: "He's going to Italy to be trained in Milan by Mr Biondi and is for owner Mrs Roveda. This is a nice horse, we vetted him and he ticked all the boxes. He is a good peformer, a sharp horse and should suit seven furlongs or a mile in Italy."

Fayathaan was not only making a swift reappearance at public auction but also generated a tidy profit for connections, having been signed for by trainer Mark Loughnane on behalf of owner Kulbir Sohi at 40,000gns at last year's Tattersalls Autumn Horses-in-Training Sale.

Loughnane saddled the colt to two successes, with his recent Wolverhampton victory, which earned him a career-high Racing Post Rating of 87, preceded by a win in a Lingfield 0-80 in early January. Friday saw Fayathaan come on the public market for the third time, having been bought by Oliver St Lawrence for £35,000 at the 2019 Goffs UK Premier Yearling Sale. 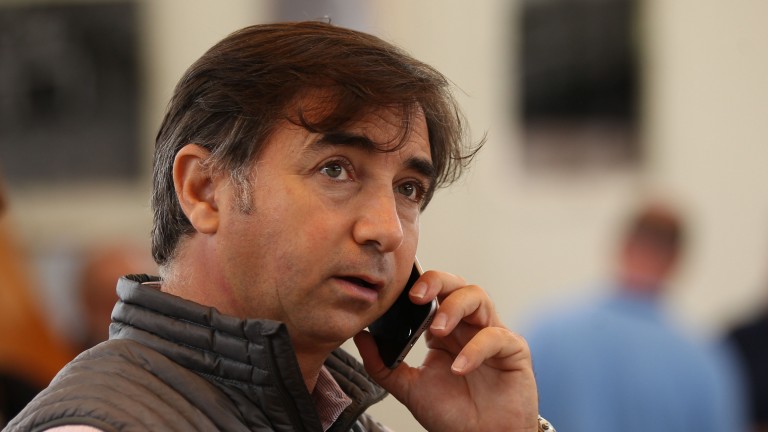 Marco Bozzi: signed for the top lot Fayathaan
Laura Green
Fayathaan topped Friday's trade, which saw a clearance rate of 81 per cent as 101 of 125 offered lots found a buyer. Those transactions brought an aggregate of 1,400,800gns, down seven per cent on the total registered at last year's live sale. The day two average went in the opposite direction, up 16 per cent to 13,869gns, while the median was down by 23 per cent to 6,000gns.

The average was down just five per cent at 11,710gns and the median dipped by eight per cent to 6,000gns.

Tattersalls reported that some 1,520 internet bids were accepted from 250 different bidders across the two days. Although telephone bidding was available, 205 lots were sold online to 130 different buyers.

Hannon maintains his hold on Clay

Second-top-lot honours went the way of the lightly raced Clay, who was offered by The Castlebridge Consignment as part of the Rothschild family's Waddesdon Stud dispersal. The son of Sixties Icon is set to remain with Richard Hannon after the trainer struck a winning bid of 71,000gns on behalf of owner John Davies.

Davies has been involved in the ownership of horses such as the Grade 2-winning hurdler Lil Rockerfeller, who left Hannon to join Neil King, and Danehill Kodiac, who beat Arc hero Waldgeist when winning the Cumberland Lodge Stakes for the Hannon yard. 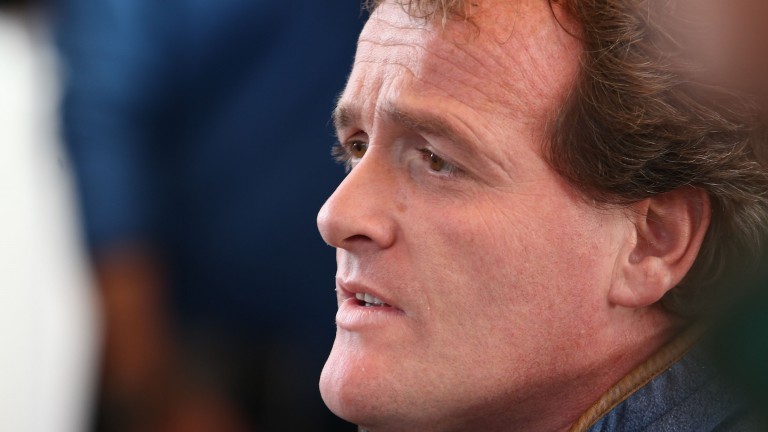 Richard Hannon: will train Clay for new owner John Davies
Laura Green
"Richard has been very good to us and Clay will be staying with him," said Davies. "If Clay continues to progress, and becomes the horse that Richard thinks he will, he should make up into a Saturday horse."

The half-brother to Listed scorer High Church has run four times for Hannon, shaping with distinct promise when third in a Chepstow novice in the summer before back-to-back runner-up efforts at Lingfield.

The four-strong Juddmonte draft was headed by At Ease, a winning daughter of Oasis Dream who went the way of BBA Ireland's Michael Donohoe at 70,000gns.

The four-year-old filly, who won a Chelmsford novice stakes while with Charlie Hills, may be a British-bred daughter of the Banstead Manor Stud resident but boasts a strong US female family, and Donohoe confirmed she would continue her racing career on the other side of the Atlantic.

"She's for a current client and is going to race on in the US," said the BBA Ireland agent. "There are no plans regarding a trainer as yet but she is lightly raced, she has a US pedigree and her siblings went on from three to four. She looks a good physical [specimen] too." 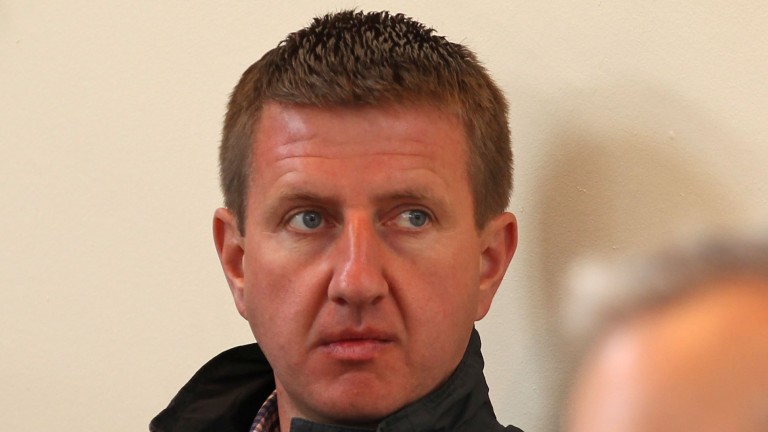 Michael Donohoe: "Her videos and photos were very good and Juddmonte, as always, have been very forthcoming with information"
Laura Green
At Ease is out of Jostle, a daughter of Brocco who landed two Grade 1s, namely the Alabama Stakes and the American Oaks. The dam has also produced seven other winners besides At Ease, including the stakes scorers Adirondack King and Nobrag Justfact, as well as the Grade 3-placed Fire Assay.

With travel restrictions forcing buyers into new ways of working, Donohoe said he had relied upon online evidence when assessing the filly's credentials.

He added: "Her videos and photos were very good and Juddmonte, as always, have been very forthcoming with information. You'd always rather see the horse yourself but we all have to do what we can in current times."

The first lot to breach the 50,000gns mark was the upwardly mobile Arctic Vega, who was knocked down to Peter Harper, bidding on behalf of Almohamediya Racing, at 60,000gns.

The four-year-old won two of his five outings for Andrew Balding, landing a Kempton maiden on his debut last year and last seen scoring in a Newcastle 0-85 handicap over a mile in January.

"He has been bought for Sheikh Sultan and is going to Bahrain," said Harper. "He's a nice, big strong type and should suit racing in Bahrain. We had him vetted – Andrew Balding's yard was very helpful."

Bred by Ed's Stud, the son of Lope De Vega was being offered at public auction for the second time having been signed for by Balding at 220,000gns at the 2018 renewal of Book 2 of the Tattersalls October Yearling Sale.

He is the third foal out of Childa, a daughter of Duke Of Marmalade who landed the Listed Prix Rose de Mai and also finished third to Norse King in the Group 2 Prix du Conseil de Paris during her own racing career.

Arctic Vega is one of two winners out of Childa, with her first foal being Chilean, who defeated subsequent Prix du Jockey Club hero Study Of Man to land the Group 3 Prix La Force.

A first for Al-Khalaf

International participation is a common theme at the February Sale and that trend continued on Friday when Saudi Arabia-based owner Reda Al-Khalaf went to 60,000gns for the useful sprinter Rovaniemi, who was offered by David Simcock's Trillium Place Stables.

Although based abroad, the owner explained that he would be leaving Rovaniemi with his current trainer. He said: "Hopefully he will be lucky for us as he is the first horse we have in training in the UK. We will keep him with Simcock, he knows the horse already. He looks a fast horse and has a good pedigree."

A winner of one of his ten starts, Rovaniemi is by Oasis Dream and out of the winning Arch mare Landmark. The colt is a sibling to six winners, notably the Listed scorer Cameron Highland and the Ribblesdale Stakes runner-up Field Of Miracles.

Rovaniemi was being offered at public auction for the second time, having been bought by Sun Stud for 320,000gns at Book 1 in 2018.

Owner Brian Millen, whose colours have been carried by smart sprinters such as Boom The Groom and Recon Mission, was among the underbidders on Arctic Vega, although he did not go away completely empty handed, as earlier in the day he secured the useful Endowed with an online bid of 36,000gns.

Millen said: "Endowed looks a useful type and he will go to Tony Carroll."

The four-year-old son of Dark Angel, who fetched 110,000gns at the Craven Sale at two and 80,000gns at Book 2 as a yearling, won two races for Richard Hannon and owner Ben Wong, and changes hands having achieved a peak Racing Post Rating of 94. He was offered by Vicky de Sousa's Brickfield Equine.

At the close of trade, Tattersalls chairman Edmond Mahony said: "Not for the first time in recent months the most important message to convey is one of sincere thanks and gratitude to vendors and purchasers alike for responding so positively to changes and disruptions to the traditional Tattersalls sales format. The collective support we have received throughout the pandemic continues to be an inspiration and cannot be underestimated.

"This is the first time we have had to utilise the ‘live virtual’ format for a sale at Park Paddocks and, apart from fervently hoping it will be the last time, overall the process has worked very well. Feedback from vendors and purchasers has been overwhelmingly positive with the vast majority of buyers using the live internet bidding platform which served us so well last year.

"Crucially, the quality of the videos and photographs supplied by the vendors has been of a high standard and additional information also available on the Tattersalls website has facilitated the buying process and given the necessary confidence for people to participate from throughout the world. The February Sale has again demonstrated how readily the Tattersalls worldwide client base has embraced our online services and we will be continuing to develop and invest in the Tattersalls online platforms which have served the industry so well in recent times.

"In recognition of the difficulties which we all continue to face under the current lockdown conditions, we will be staging an additional mixed March fixture taking place March 31 and April 1 here at Park Paddocks for which entries are now being taken. At this stage the intention is for the Tattersalls March Sale to take place conventionally, in compliance as ever with any prevailing Covid - related protocols, and timely announcements will be made if it becomes necessary to make any changes to these plans."

FIRST PUBLISHED 5:25PM, FEB 5 2021
You'd always rather see the horse yourself but we all have to do what we can in current times