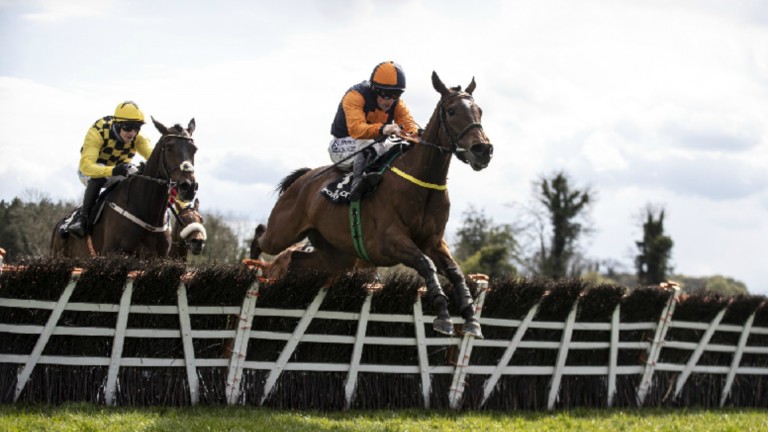 Jeff Kidder and Sean Flanagan gallop to victory at Punchestown
Patrick McCann/Racing Post
1 of 1
By Tom Peacock 5:04PM, MAY 1 2021

Hallowed Crown, whose couple of seasons visiting Kildangan Stud did not produce any fireworks on the Flat, now has an unexpected National Hunt Grade 1 to his name after Jeff Kidder produced another upset in the Ballymore Champion Four Year Old Hurdle at Punchestown.

A Golden Rose and Randwick Guineas winner in Australia, the Street Sense stallion Hallowed Crown has had more success with his runners down under and his two stakes winners are led by Colette, who took the Group 1 Australian Oaks for Godolphin this time last year.

He produced around 100 foals from two seasons covering in Ireland, of which Jeff Kidder is one of his older crop. Bred by Jennifer and Evelyn Cullen, he was a €24,000 purchase by Peter Nolan Bloodstock at the Tattersalls Ireland September Yearling Sale and has run on both the Flat and over hurdles for Noel Meade.

Finally successful in a mile and a half handicap at Bellewstown last summer, Jeff Kidder burst to prominence when causing an 80-1 boilover in the Fred Winter at Cheltenham.

While he had gone on to upset odd-on favourite Teahupoo in the Rathbarry & Glenview Studs Juvenile Hurdle at Fairyhouse over Easter, Jeff Kidder found himself discounted in the betting once again as he pulled another 22-1 shock out of the fire in thwarting the high-class Zanahiyr by three-quarters of a length.

Hallowed Crown returned to Australia and has been standing at Twin Hills Stud in New South Wales for the fairly modest fee of A$11,000 (approx £6,100/€7,000). He has had just four progeny go jumping but two of them have won.

FIRST PUBLISHED 5:04PM, MAY 1 2021
Bred by Jennifer and Evelyn Cullen, he was a ?24,000 purchase by Peter Nolan Bloodstock at the Tattersalls Ireland September Yearling Sale