George Strawbridge's filly was a €17,000 purchase by Johnny McKeever from Goffs 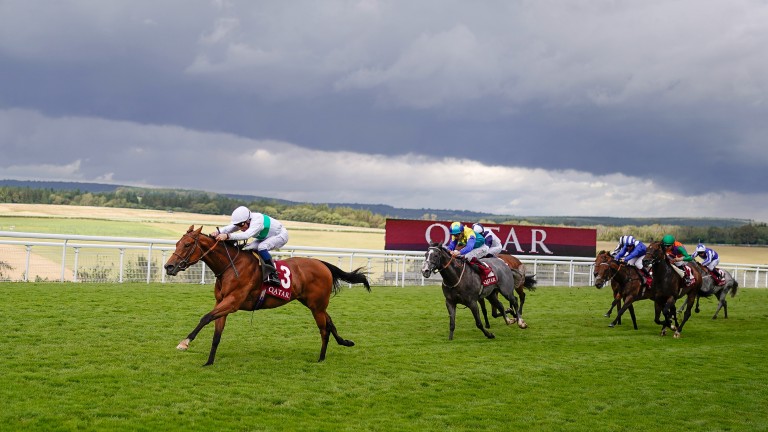 Suesa scorches to success in the King George Stakes at Goodwood
Alan Crowhurst
1 of 1
By Kitty Trice 5:29PM, JUL 30 2021

It was all about Battaash before the King George Qatar Stakes but Suesa dispelled all pre-race talk with a dazzling three-length display to cement herself as another potential top-level star for Night Of Thunder.

The Thomastown Farm-bred filly was sold for just €17,000 to Johnny McKeever at the 2018 Goffs November Foal Sale but has dazzled so far in her career with five wins from six career starts.

A winner of her two starts as a juvenile for Carlos Laffon-Parias and Georgiana Cabrero, she was privately purchased by George Strawbridge in April to join Francois Rohaut and showed the first signs of her dazzling talent with two authoritative Group 3 wins in the Prix Sigy and Prix Texanita.

Her sole defeat came when eighth in the Commonwealth Cup but a return to top-level company is surely on the cards for the three-year-old, one of 13 individual Group winners for Darley's exciting Night Of Thunder.

SUESA the day I bought her as a foal f @Goffs1866i for €17,000! Huge congrats to Mr George Strawbridge f @RohautRacingi f @williambuicki and Patrick Olave,Spanish trainer, who originally commissioned her. Reared f @CastletownStudi , she was always special pic.twitter.com/wprt4Uc3s7

Suesa is the fourth foal out of the unraced Orpen mare Sally Is The Boss, a half-sister to the stakes-placed Sheboygan and out of another stakes performer in White Satin, a Fairy King half-sister to 1,000 Guineas Trial Stakes runner-up Sweet Treat.

Night Of Thunder enjoyed a breakthrough top-level winner in Europe when Thundering Nights won the Pretty Polly Stakes at the Curragh for Joseph O'Brien in June.

Already responsible for Queensland Derby scorer Kukeracha, the son of Dubawi has also produced Dante Stakes winner Thunderous, a brace of Italian Group 2 scorers in Night Colours and Auyantepui, plus the likes of Jersey Stakes hero Molatham and Princess Margaret Stakes victress Under The Stars.

The ten-year-old, the sole offspring of the winning Galileo mare Forest Storm, stands at Kildangan Stud for a fee of €75,000.

FIRST PUBLISHED 5:29PM, JUL 30 2021
Suesa is the fourth foal out of the unraced Orpen mare Sally Is The Boss, a half-sister to the stakes-placed Sheboygan