The colt is out of the placed Champs Elysees mare Respectable 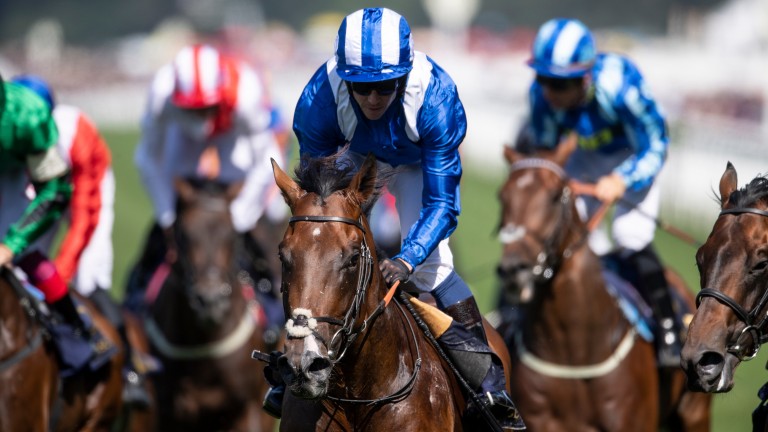 Eqtidaar: winner of the Commonwealth Cup has welcomed his first foal
Edward Whitaker
1 of 1
By Kitty Trice UPDATED 5:48PM, JAN 22 2021

Royal Ascot-winning sprinter Eqtidaar has his first foal on the ground, with the placed Champs Elysees mare Respectable giving birth to a colt on Friday.

Born at Brook Stud in Newmarket, the colt hails from a family that includes Darshaan, Dar Re Mi and European champion juvenile Too Darn Hot. Respectable, a five-year-old who ran second in a Salisbury novice for Ralph Beckett, is out of Dalandra, a Montjeu half-sister to Listed scorer Dalkova.

Dwayne Woods of the stud said of the newest arrival: "He’s a good strong, correct colt with size and scope. We’re delighted with him."

Eqtidaar, who stands at Shadwell's Nunnery Stud for a fee of £5,000, was a debut winner and fourth in the Sirenia Stakes at two before following up his Pavilion Stakes third with victory in the Commonwealth Cup at three, defeating the likes of Sands Of Mali, Invincible Army and Unfortunately.

The six-year-old son of Invincible Spirit is a half-brother to Hungerford Stakes victor and Qicpo 2,000 Guineas runner-up Massaat - who stands at Mickley Stud - and last season's Horris Hill Stakes winner Mujbar, another to sport the famous colours of Hamdan Al Maktoum.

'Without breeders, we don't have a sport' - meet NYTB's new boss Najja Thompson