Starspangledbanner half-sister to Alcohol Free set for debut at Newcastle 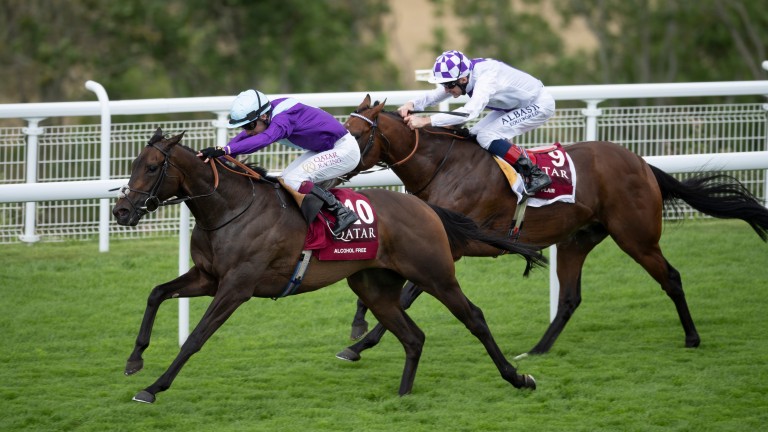 Hooked On You, a half-sister to three-time Group 1 winner Alcohol Free, will attempt to follow in her illustrious sibling's footsteps when lining up for her debut at Newcastle (5.30) on Monday.

The daughter of Coolmore's Starspangledbanner was bred by Jossestown Farm and sold to Pegasus Bloodstock for €40,000 at the Goffs February Sale before being picked up by Creighton Schwartz Bloodstock for 130,000gns at the Tattersalls December Yearling Sale.

John and Jess Dance's two-year-old is the fifth foal out of Plying, a two-time winning daughter of Jonabell Farm resident Hard Spun and a half-sister to five winners including Flying Childers Stakes third Kissing Lights.

Plying's most notable progeny comes in the form of Alcohol Free, a daughter of No Nay Never who struck in last year's Cheveley Park Stakes before pulsating victories in the Coronation and Sussex Stakes this summer for Andrew Balding and Jeff Smith.

The daughter of No Nay Never was in turn bred by Churchtown House Stud and sold to Smith's Littleton Stud for just €40,000 as a foal from Goffs.

HOOKED ON YOU makes her debut tomorrow @NewcastleRaces for the @karl_burke team, PJ rides.

The 11-year-old Plying has also produced the stakes-winning Camelot gelding Alexander James, a winner for Iain Jardine before transferring to Mlle A-S Crombez in France.

She has a yearling colt by Dandy Man and produced a filly by Gleneagles this term before being covered by Ballylinch Stud stalwart Lope De Vega.

Among Hooked On You's seven rivals are Cheveley Park homebred Persist, a daughter of Frankel and Queen Elizabeth II Stakes heroine Persuasive, and Chichen Itza, the Niarchos family's Fastnet Rock half-sister to Japanese Grade 2 winner King Of Koji and out of a winning full-sister to Irish 1,000 Guineas winner Nightime, the dam of Ghaiyyath.

FIRST PUBLISHED 2:08PM, SEP 26 2021
She has a yearling colt by Dandy Man and produced a filly by Gleneagles this term before being covered by Ballylinch Stud stalwart Lope De Vega