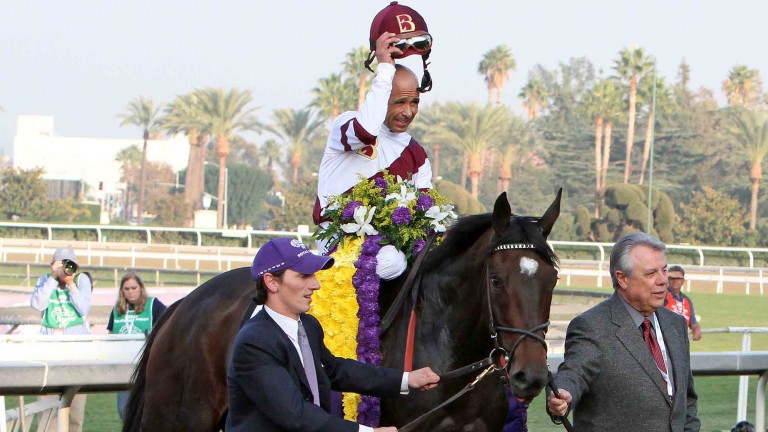 One of racing’s most poignant stories is set to continue in Europe as the only foal produced by the star-crossed three-time American champion mare Royal Delta, a now two-year-old bay filly by Galileo, will be trained by Roger Varian in Newmarket.

Benjamin Leon, the Florida-based healthcare entrepreneur who paid $8.5 million for Royal Delta at the 2011 Keeneland November sale and raced her to two champion older female titles, has named the filly Delta’s Royalty and hopes she will be as superior a runner as her dam.

“She will never be sold,” Leon declared when asked how much the filly means to him. “She is the most important thoroughbred that I have because of what she represents to me from Royal Delta.

“Her physics and beauty, and her size and strength – she seems to be perfect in everything. And according to what Roger Varian has told me, she’s very smart and has not had any kind of issue whatsoever.

"She’s pointing the right way – she’s doing everything perfectly. So far, so good.”

Retired after earning her third consecutive American divisional championship in 2013, a string that began with champion three-year-old filly honours in 2011 when she achieved her first of two Breeders’ Cup victories, Royal Delta was bred to Galileo three times.

On February 1, 2017, Royal Delta produced the filly while boarded at Coolmore but the mare, a winner of six Grade 1 races and over $4.81m in prize-money, tragically died due to complications from the foaling. Leon said he felt the loss as deeply as he would have if a family member had passed away.

The only consolation is that Delta’s Royalty is "absolutely outstanding – she’s gorgeous," said Leon, who also made a mark in the sport as breeder of 2017 American Horse of the Year Gun Runner under his Besilu Stables banner.

"She appears to have all the tools necessary in order to honour her mother as a racehorse."

Leon decided to make Delta’s Royalty his first racehorse based in Europe because she is by Galileo, who he praised as “the top sire worldwide,” and her dam displayed high potential in a workout on turf for trainer Bill Mott. Family genetics also point to turf.

By Empire Maker, Royal Delta was a daughter of the A.P. Indy mare Delta Princess, a multiple Graded winner on grass. Royal Delta’s half-sister Crown Queen, by Smart Strike and a $1.6m weanling acquisition by Leon, was a Grade 1 winner on turf.

“I’m breeding turf horses in Europe to run in Europe, and the ones who earn the right to run in the Breeders’ Cup, will come here [to the US] and do that,” added Leon, who also has Crown Queen boarded in Britain.

Crown Queen’s first foal, a two-year-old colt by Empire Maker, is currently in early training at Bridlewood Farm in Florida and will eventually go to Mott for racing in America.

Crown Queen has a yearling colt by Galileo who will be aimed at racing in Europe, and Leon said the mare was due to be bred this season to Dubawi with longer range plans for a mating to Frankel in 2020.

As for Delta’s Royalty, Leon said he is grateful that Royal Delta left him a filly to continue her legacy.

“With the genetics, I thought Galileo would be a perfect match for Royal Delta, and I’ve never seen a filly any better than the way Delta’s Royalty looks. I have great expectations for her,” he said.

“I’m having her trained in England because I think the training over there is superior for turf horses. The whole idea is to have her compete in Europe and hopefully go to Royal Ascot and to the Prix de l’Arc de Triomphe.

“The only thing I’m sorry about is that we lost Royal Delta,” he reflected. “With the filly she produced, she would have given me some other outstanding foals, but I have to be grateful to the Lord for giving me everything I’ve been able to have.

"I’m hoping that Delta’s Royalty will be a one-of-a-kind experience.”

First foal for champion and $9.5m mare Songbird is an Arrogate filly

FIRST PUBLISHED 7:50PM, JAN 30 2019
According to what Roger Varian has told me, she?s very smart and has not had any kind of issue whatsoever