Paris Lights should improve for debut fifth, while one or two others catch eye 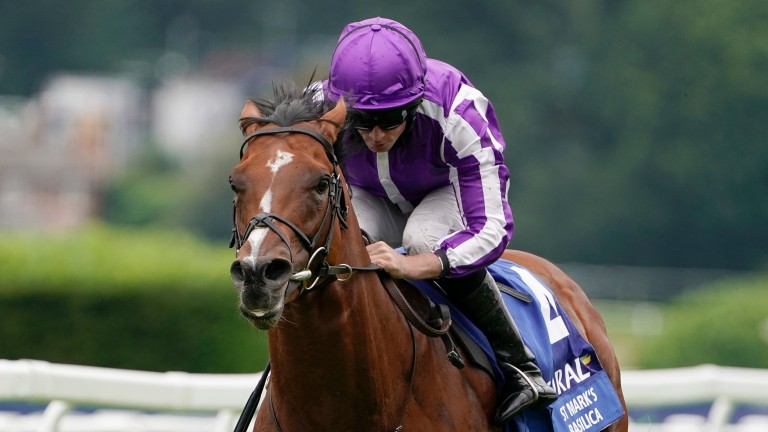 St Mark's Basilica: brother will bid to get off the mark on Thursday
Alan Crowhurst
1 of 1
By Andrew Scutts UPDATED 8:13PM, OCT 13 2021

The Curragh’s Thursday card begins with four maidens, the first three of which are for two-year-olds.

While he is not making his debut, it’s hard to take your eye away from Paris Lights in the opener at 12.40, given the Jessica Harrington-trained oolt is a brother to arguably this season’s number one performer St Mark’s Basilica, whose own future lies at Coolmore Stud.

Paris Lights, by Siyouni out of Galileo’s daughter Cabaret, was bred by Bob Scarborugh and also races for him having been a 650,000gns vendor buyback at last year’s Tattersalls Book 1.

Scarborough, long-time chairman of the Moonee Valley Racing Club, has bred not one but two Classic winners from blue hen Cabaret, with Magna Grecia preceding his younger half-brother St Mark’s Basilica and winning the 2,000 Guineas - he was by Invincible Spirit.

Paris Lights should come on for his debut fifth over course and distance last month, after which Scarborough told reporters: "He completely blew the start and he had no chance after that in a big field of 15. He's very raw and he's done exactly what the other two, Magna Grecia and St Mark's Basilica, did on debut in failing to win.”

An even bigger field of 17 has been declared to contest Thursday’s 7f maiden, and most of them have at least one run under their belt.

One who doesn’t is Dalmation Coast, bred by Barronstown Stud and who runs for Coomore from the yard of Aidan O’Brien.

The son of Galileo is out of Red Ransom mare Keenes Royale, a half-sister to Berkshire. Among Dalmatian Coast’s siblings is Group 2 July Stakes and Richmond Stakes winner Ivawood, who was at his best as a two-year-old and is now a stallion in France. He looks an interesting debutant.

So too in the 1m1f maiden that follows is stablemate Olympic Flame, a son of Camelot out of successful producer Crazy Volume.

Among the dam’s progeny to race is Gallante, by Montjeu,  a top-level winner in both hemispheres having taken the Grand Prix de Paris and Sydney Cup. Listed winner Silence Please has also done her bit for the family and was a decent enough third in a Group 3 at the Curragh last month.

By Galileo, the colt is the first foal out of Pour Moi’s daughter Only Mine, who won the Group 3 Lacken Stakes plus two Listed races.

This contest looks perhaps a shade deeper than the opener, or the sprint maden that follows, but all in all it looks a card worth keeping close tabs on with your notebook to hand.

FIRST PUBLISHED 9:54AM, OCT 13 2021
He's very raw and he's done exactly what the other two, Magna Grecia and St Mark's Basilica, did on debut in failing to win