James Thomas reports from the concluding session of the store auction 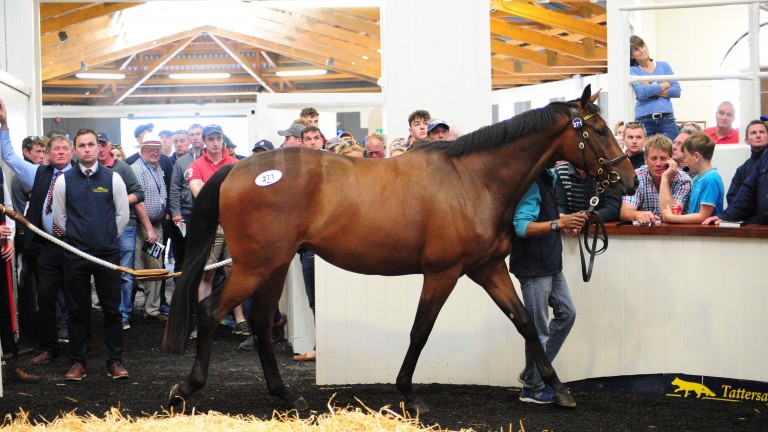 Lot 271: the sale-topping son of Martaline in the Fairyhouse ring before being knocked down to Ronnie O'Leary
Pat Healy
1 of 1
UPDATED 4:06PM, JUL 4 2019

Robust trade resumed on day two of the Tattersalls Ireland Derby Sale in Fairyhouse on Thursday, and the session duly supplied the most expensive store sold so far in 2019 as Ronnie O'Leary gave €220,000 for the Martaline gelding Clerval offered by Oaks Farm Stables.

O'Leary was bidding from down in the packed gangway to the left of auctioneer Ollie Fowlston's rostrum. Aiden Murphy, on the phone on the top tier of the auditorium, made a bold play for the youngster, but when Fowlston looked for an increase on O'Leary's final bid the bloodstock agent could be seen ending the call.

"That's not a good sign," quipped the auctioneer to a ripple of laughter before bringing the hammer down and pointing in O'Leary's direction. The transaction saw the €200,000 barrier broken for the first time during this year's post-Gigginstown store sale season.

"He was the pick of the sale, he was an absolute prince of a horse," said the winning bidder. "I had to have him, I couldn't let him go because everything about him is just magnificent. You couldn't knock him; his walk, his looks and the sire, he had everything. He needs to be lucky now." 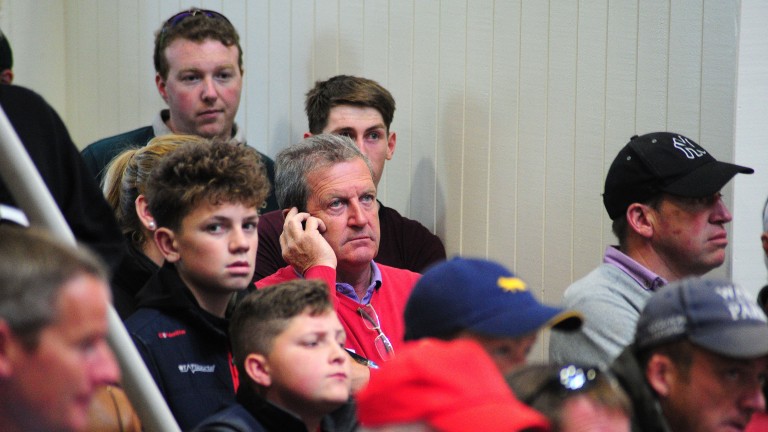 Ronnie O'Leary on the phone while bidding for the sale-topping Clerval
Pat Healy
The French-bred Clerval rewarded a bold pinhook, as the youngster had been signed for by George Mullins at €145,000 at last year's Arqana Summer Sale. Oaks Farm Stables' Mark Dwyer said: "We gave an awful lot of money for him when we bought him, he cost the guts of €150,000.

"We loved him, but there was a lot of other people who loved him too, so you've got to pay for that love! It was easy to love his action and his attitude though, that's what we're always looking for. You want a horse with substance and a good mind and he had all those attributes."

While much of the stock to be reoffered at the Derby Sale had been sourced at the foal sales, either in France or at the November National Hunt Sale, Clerval was purchased as a two-year-old store in Deauville.

"They're nearer the sales when you buy them at that stage so the physical change isn't going to be dramatic, you're three parts of the way there," said Dwyer, who added that Willie Browne of Mocklershill was the man responsible for raising and prepping the horse.

"He came back as good as we'd hoped he would and he showed very well and vetted cleanly, all the boxes were ticked."

Tom Malone may not have been paying much attention to the ICC World Cup action between the West Indies and India at Old Trafford on Thursday, but he did have a different kind of cricket on his mind, as the agent went to €200,000 to secure Gemini Cricket, a son of Blue Bresil offered by Brown Island Stables, mid-way through the session.

"I bought his half-brother, Eden Du Houx, for Caroline Tisdall after he won his point-to-point," said Malone from his regular ringside position behind the rope. "He went and won a Listed bumper at Ascot and he's potentially one of David Pipe's best young horses so I think the pedigree is going to open up again in the near future.

"We've had luck with Blue Bresil before with Ibis Du Rheu, who won at the Cheltenham Festival." 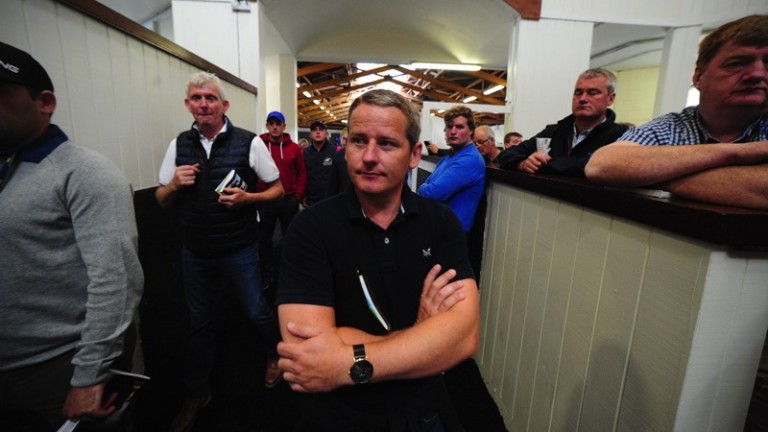 Tom Malone in position behind the rope in the Fairyhouse ring
Pat Healy
Malone also admitted to a sense of relief after striking the winning bid, having kept his powder dry earlier in the session in anticipation of the three-year-old, out of the Louveteau mare Maralypha, coming on the market.

He said: "I missed a few horses earlier in the day waiting for him so was hoping I wasn't going to have to leave him behind. I'm delighted to have got him and he'll go to Paul Nicholls."

The result was also a good one for pinhooker Johnny Collins of Brown Island Stables, who picked the youngster up before Eden Du Houx revealed himself as an exciting talent.

"I bought him privately as a foal and he was always a great mover and a lovely type," explained Collins. "The pedigree has had a good update as his half-brother has done well and he's proved that the mare can get runners. We came here thinking he was our biggest hit, though I didn't think he'd go for that much."

The gelding is from the last French-bred crop of Blue Bresil, as the son of Smadoun, whose headline talents also include Mick Jazz and Le Prezien, transferred from Haras de la Croix Sonnet to Yorton Farm Stud in 2016. He stood the latest breeding season at a fee of £6,000.

Malone's purchase meant that the three most expensive stores at this year's Derby Sale were all sourced in France, following on from Gigolo' Dai Dai, a son of Al Namix offered by Walter Connors' Sluggara Farm, topping day one when bought by Kevin Ross for €190,000.

Highflyer Bloodstock's Anthony Bromley, David Minton and Tessa Greatrex enjoyed a fruitful two days in Fairyhouse, and by the time trade had drawn to a close the agency had signed for 26 lots for a broad range of clients for a total outlay of €1.473m and an average of €56,655.

Topping that lengthy list was the Yeats gelding out of Gaye Preskina, who was knocked down to Bromley, standing with champion trainer Nicky Henderson, for €150,000 during the early stages of Thursday's session.

"We loved him, he's gorgeous and a very athletic horse," Bromley said of the Springhill Stud-consigned lot. "We saw him early in the week and earmarked him as one to try and get.

"We'd hope to get him for less but the market is so strong. He comes from a good hotel and came well recommended by Kieran Lennon [Springhill Stud]. We're pleased to strike because it's not easy."

The three-year-old was another to show a marked increase in value, having been signed for at just €19,000 during the November National Hunt Foal Sale in 2016.

"He was our nap of the week!" added Henderson. "I like Yeats, we've been having a good time with his progeny, we bought two at the Land Rover Sale as well."

Plenty of pinhookers were in clover after two days of buoyant trade, but it is debatable whether anyone could match the stunning touch pulled off by the Kinsella family's Ballincard Stables when Mags O'Toole bought their Getaway filly for €125,000.

It was back in November 2016 when Pat Kinsella, who was accompanied on Thursday by his wife Bernadette and daughter Sarah, acquired the filly for a mere €1,800.

At that point the dam had only just supplied her first winner, handicap scorer For Sinead, but come Thursday's session she was listed as having produced impressive Aintree winner Kildisart and striking maiden point winner The Big Breakaway, who topped the Goffs Punchestown Sale at €360,000.

"We knew she was going to make big money, maybe €100,000, because she's a top-class filly," said Pat assuredly. "We're good judges of horses, we've been doing it for a good few years. A lot of work goes into at home, leading them in and out and minding them and getting them ready for the sale."

Although the family netted a mighty profit with the well-related filly, Bernadette suggested it was their grounding with a different type of equine that underpinned their success.

"We used to have half-breds, and having shown them we know all about a horse's movement," she said when asked how they had unearthed the six-figure filly for such a chicken-feed sum.

"Three years ago the fillies weren't as popular and since then Kildisart and The Big Breakaway have come on to the page. On the day only her half-sister, For Sinead, had won."

Sarah added: "She just stood out to us because she was a big, raw filly and we said we'd take a chance on her."

It was undoubtedly a chance well taken.

At the close of a second solid session of trade, the aggregate for the two-day sale stood at €17,093,500, down four per cent year-on-year despite three more horses coming under the hammer; the average was down two per cent to €50,570; while the median remained static at €42,000.