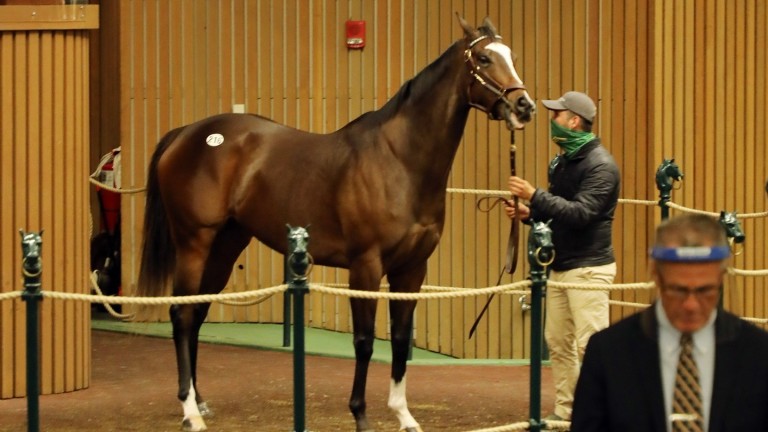 It was a solid start to the Keeneland November Breeding Stock Sale on Monday, with eight seven-figure transactions that set the stage for the remainder of the auction that is the bellwether for the breeding and foal market.

"We had a solid day of trade," said Shannon Arvin, Keeneland president-elect and interim head of sales. "We were really happy with the broad domestic and international participation. Overall, we were happy with how the day went."

Keeneland officials were particularly pleased with the continued use of internet and telephone bidding options by buyers unable or unwilling to attend the auction in person due to the Covid-19 pandemic and associated restrictions, as well as spreading out the on-site bidding locations.

Arvin said there were 62 bids placed over the internet, totalling just over $6 million, including one seven-figure transaction among the nine online purchases.

"We have learned one of the benefits of internet bidding is that while the agents can get out and evaluate the horses, it's the principal who then does the bidding," said Geoffrey Russell, Keeneland's director of sales operations.

"I think that has helped the agent and the principal because the principal might go a little further than the agent had been authorized to go to. That's been a great benefit of the internet."

Mark Taylor, whose family's Taylor Made Sales Agency was the day's leading consignor, was pleased with the level of trade.

"It runs the breadth of the upper middle to high end of the market. All the best offerings are spread out and not concentrated. How far this carries over through the coming days remains to be seen but so far it's been good."

Russell said if the Keeneland September Yearling Sale is any barometer, the solid start should trickle down through the rest of the sale that continues through to November 18.

"In September, there was great trepidation after the first two books were over and we went all the way to the end of the sale with a very strong and vibrant market," Russell said. "It was at a lower level, but the horses were trading and moving on and that is what we hope and expect will continue here."

Larry Best's OXO Equine purchased the two top-priced horses on the day, getting Grade 1 winner Concrete Rose for $1.95 million and the mare Indian Miss for $1.9 million.

A filly with a major recent pedigree update that caught the attention of buyers was Cherokee Maiden, a three-year-old daughter of Distorted Humor offered by Bedouin Bloodstock purchased by Emmanuel de Seroux for $1.85 million on behalf of Grand Farm.

Lady Prancealot in the back ring. Looks like the Filly and Mare Turf didn’t take anything out of her. @TaylorMadeSales @TeamBaltas pic.twitter.com/5R9yf57kPM

The filly already had a stellar pedigree as her dam, the champion Tiznow mare Folklore, is the granddam of Contrail, this year's undefeated winner of the Japanese Triple Crown. Her pedigree only improved over the weekend when Essential Quality, produced from a stakes-placed half sister to Folklore, won the Breeders' Cup Juvenile at Keeneland.

"She's a very nice broodmare prospect for us, and the pedigree's improving so much; there's more action in the family every day," de Seroux said, noting that plans for the filly are incomplete. "She's going to go to Japan, probably. They will decide in the next few days."

"We're very happy with that price," said Neal Clarke, partner in Bedouin Bloodstock. "It was more than we thought and the timing was just perfect.

"We've been very, very happy with what we've done today, but we have a ways to go. We're not going to rest on our laurels just yet."

FIRST PUBLISHED 9:00AM, NOV 10 2020
She's a very nice broodmare prospect for us, and the pedigree's improving so much