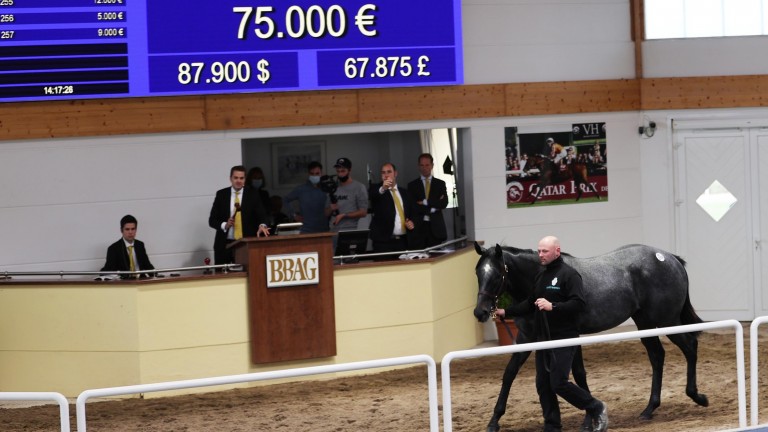 Trade picked up a little during Saturday's concluding session of the BBAG October Sale as some of the final figures showed an encouraging improvement on 12 months ago.

The bar had not been set particularly high from what had been a disappointing 2019 sale but Friday and Saturday had taken place with only vendors and accredited buyers allowed to attend and Covid-19 preventing many overseas visitors.

The clearance rate dropped again to 60 per cent, but German vendors traditionally set stiff reserves and some horses were evidently heading through the ring to be qualified for valuable auction prizes.

On Friday, a €52,000 move for a son of Adlerflug had been enough to secure leading honours and this time it required a bid of €75,000 for a yearling Soldier Hollow colt offered by Gestut Rottgen out of a Group-placed half-sister to the very smart Wild Coco.

Several others broke Friday's high, too, with a Pivotal half-sister to Group 1 winner Ivanhowe as well as Fighting Fifth Hurdle scorer Irving heading to Gestüt Fährhof for €55,000.

That same sum was also enough for a son of the increasingly popular Sea The Moon to be knocked down to Gestut Auenquelle. The January-born colt is a full-brother to recent valuable Haydock handicap winner Favorite Moon and a half-brother to Fun Mac, a standing dish in good staying events for Hughie Morrison.

A daughter of Areion is also set to have the best possible chance of success as she was bought by German agent Jurgen Albrecht on behalf of trainer Andre Fabre for €46,000. She has two stakes-winning siblings including full-sister Prima Violetta.

FIRST PUBLISHED 5:38PM, OCT 17 2020
A daughter of Areion is set to have the best possible chance of success as she was bought by German agent Jurgen Albrecht on behalf of Andre Fabre