Scott Burton reports from session one of Arqana's five-day auction 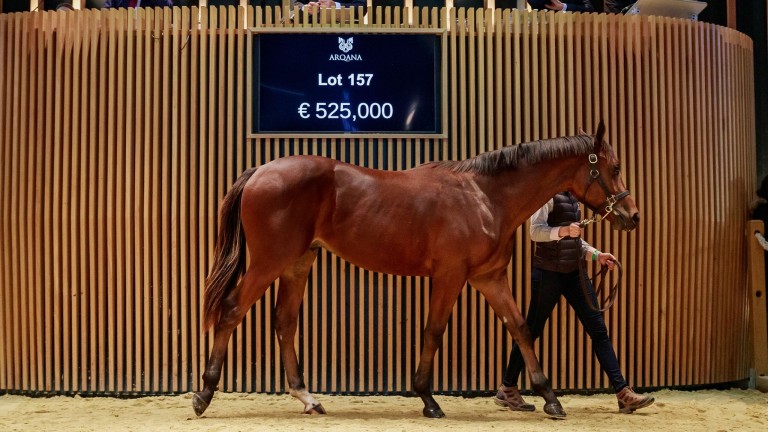 The celebrations in Normandy following the victory of Sottsass in the Qatar Prix de l'Arc de Triomphe have barely died down but the combination of his sire Siyouni and his breeder, Ecurie des Monceaux, proved irresistible on day one of the Arqana October Yearling Sale on Monday.

Monceaux-consigned colts by the Aga Khan Studs' star sire accounted for three of the top six lots at the opening session, with Al Shaqab winning out at €525,000 for the second offspring of Prudente (lot 157), a Dansili half-sister to the farm's blue hen producer Prudenzia, setting a new record for the October Sale in the process.

Anthony Stroud looked likely to see off all-comers at one stage with a series of €50,000 raises but Nicolas de Watrigant and Al Shaqab's chief operating officer Paul Hensey were not to be denied.

Hensey said of the colt: "He's a gorgeous horse. I think everybody on the team fell in love with him from the moment we saw him. 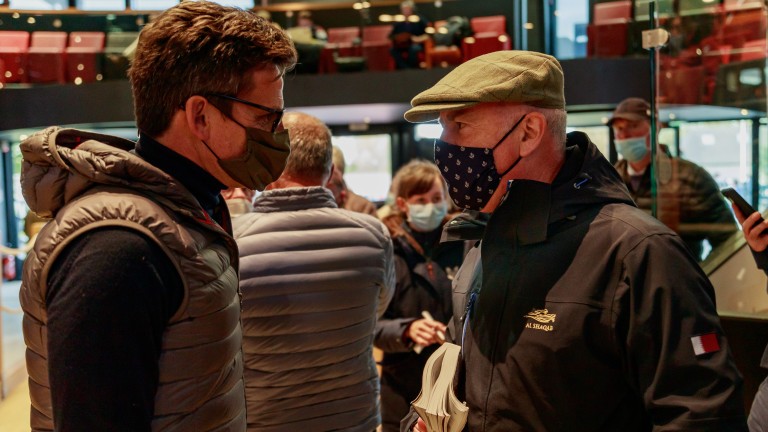 Ecurie des Monceaux principal Henri Bozo chats to Paul Hensey after Al Shaqab's purchase of Monday's top lot (157) a €525,000 son of Siyouni
Zuzanna Lupa
"He's a beautiful individual and he's from one of the best pedigrees in the book, and from one of the best farms that you can buy from. There's an awful lot to like about him and he could be anything."

Al Shaqab have returned with some force to the yearling market this autumn and signed for 13 lots totalling €1.384 million during Monday's part one session.

"The market I think has been strong," said Hensey. "We’ve bought a few today and it’s been challenging to buy. We’ve had plenty of competition for any of the horses we were on so I think it’s a good solid trade for the horses that are here."

Arqana's perennial lead consignors tasted further success with colts from its famed "P" line, with David Menuisier striking at €210,000 for a Siyouni son of the Montjeu mare Pacifique (lot 137), herself a sibling to Prudenzia and English King. 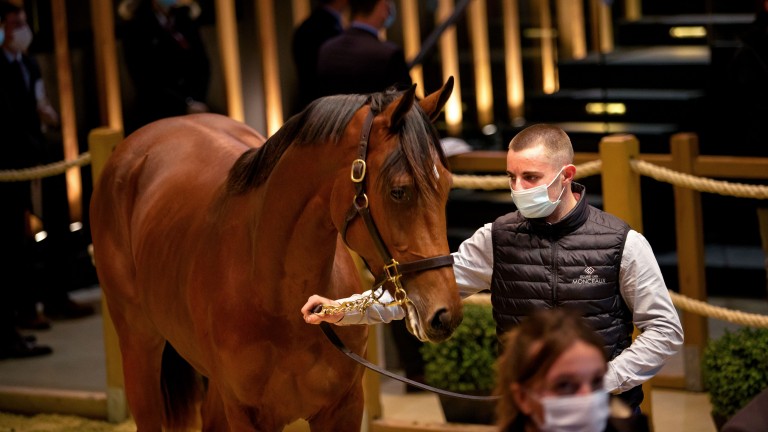 David Menuisier goes to €210,000 to secure Ecurie Monceaux's Siyouni half-brother to Group winner Paix
Zuzanna Lupa
Pacifique's first offering at Arqana was the €2.6m August sale-topper in 2015 while Paix, her three-year-old filly by Muhaarar, landed the Group 3 Prix du Lutece at Longchamp in September for her co-breeders Skymarc Farm and Monceaux.

Joined by phone, Menuisier said: "He's a nice colt from a good family and I love horses who can get a trip. He's a horse that could be made for the Melbourne Cup in years to come"

Six lots earlier Federico Barberini gave €200,000 for a Siyouni colt out of the Galileo mare Newton's Night (lot 129), the same cross as was successful with Sottsass himself.

The Irish wing of the Aga Khan's stallion operation was also to the fore as Chantilly-based trainer Hiroo Shimizu and agent Daniel Cole won out at €450,000 for a filly by Sea The Stars presented by Haras d'Etreham (lot 110b).

Bred by Ecurie des Charmes and Ballylinch Stud, her dam Matauri Pearl was bought at the Arqana Breeding Stock Sale in 2015 by Meridian International for €400,000 and Ghislain Bozo was the first to offer his congratulations to the winning team. 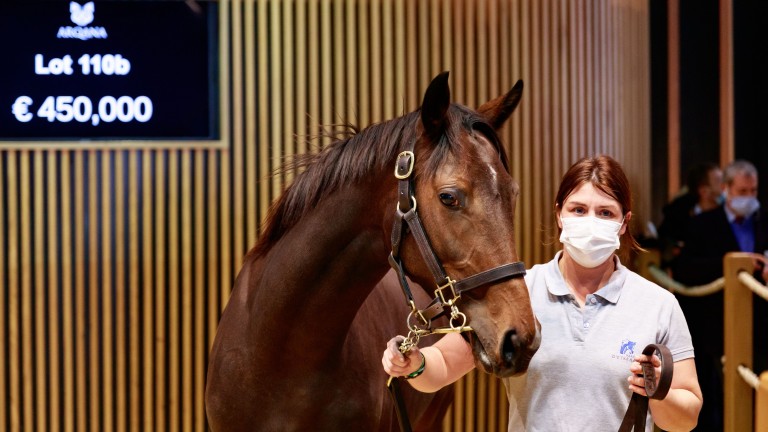 Lot 110b: Haras d’Etreham's Sea The Stars half-sister to Grade 2 winner Aunt Pearl is knocked down to Hiroo Shimizu for €450,000.
Zuzanna Lupa
Seated in the restaurant behind the rostrum, Shimizu was in contact throughout the bidding with Shiego Nomura, whose colours will be carried by the filly, and who has already tasted success this season in tandem with the trainer courtesy of their promising two-year-old, Midlife Crisis.

"She looks like she will make a three-year-old," said Shimizu. "She's not very big but her way of moving puts me in mind of Deep Impact; she's light on her feet in the same way. I was instructed by the owner to buy an exceptional filly and while she was not cheap, everyone was in for the same horse."

Stroud and Godolphin rebound with pair of purchases

Anthony Stroud's success at past October Yearling sales is illustrated by the picture of Prix Jean Romanet heroine Audarya which adorns the cover of the 2020 catalogue and, shrugging off the disappointment of missing the Siyouni top lot, he secured yearings by Exceed And Excel and Iffraaj in quick order.

At €280,000 the Exceed and Excel filly (lot165) from Haras de Mezeray is out of Rose Et Or, a half sister to the Prix Saint-Alary heroine Coquerelle.

Monceaux were responsible for the colt by €160,000 Iffraaj colt (lot 167) out the winning Invincible Spirit mare Royale Du Buisson, whose brother Ride Like The Wind won the Prix Djebel 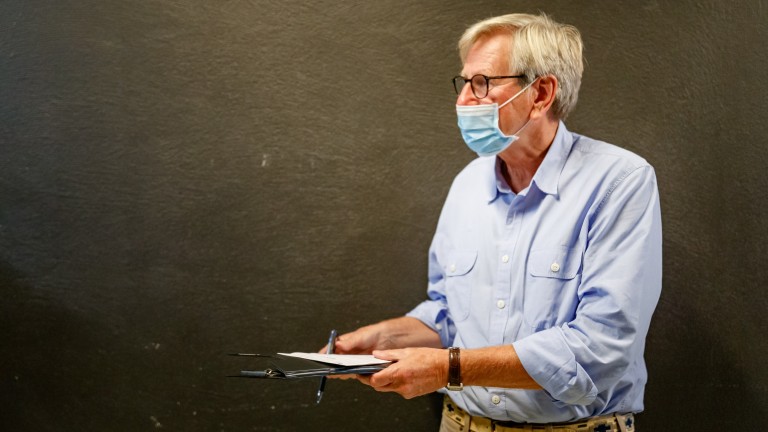 Anthony Stroud made a pair of purchases for Godolphin
Zuzanna Lupa
"She is a lovely filly and was supposed to be here in the summer but didn't make it," said Stroud. "She is very athletic and both she and the Iffraaj colt are for Godolphin

"I was the underbidder on the Siyouni and it just shows in this market that a really nice horse can come in - as we've had all the sales season - and he could still make a price like that, which was a very good price. The Sea The Stars that sold earlier was a very good sale as well.

"The sale may have been diluted a bit by having a sale in September and horses that would have normally come in here perhaps went in September. I think it will be very difficult to compare these results with last year's."

Haras de Grandcamp have stood Dabirsim for the last five seasons and scored a notable success when achieving €182,000 for a full-sister to Poule d'Essai des Pouliches runner-up Coeur De Beaute by the stallion (lot 216).

Having been on the other end of the deal for several of the day's notable sales, it was Henri Bozo who struck the winning bid while taking instruction over the phone.

"I have bought her for David Redvers who could not be here," said Bozo. "She's for a syndicate and we will will take a piece. She's a beautiful filly and has a good pedigree."

Vendors appear to have come to Deauville with realistic hopes of what prices might be achieved and a clearance rate of a shade under 80 per cent will be cause for satisfaction.

With the delayed Select Yearling Sale having taken some of the cream away from October, direct comparisons are of limited use. The average on day one in 2019 was in excess of €81,000 while it was €58,270 on Monday for an aggregate of €9.49m.

FIRST PUBLISHED 8:24PM, OCT 19 2020
He's a gorgeous horse. I think everybody on the team fell in love with him from the moment we saw him