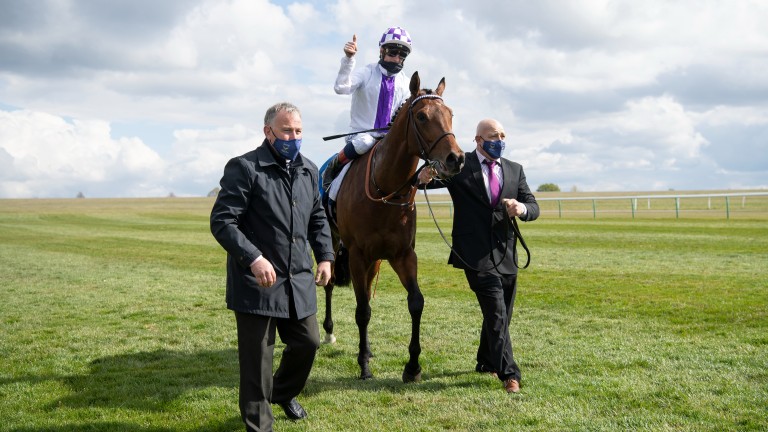 Siblings to recent Classic winners are an exceedingly rare commodity at public auction, but prospective purchasers will get the opportunity to buy not one but two such yearlings during day one of the Goffs Orby Sale on Tuesday - and all within the space of around ten minutes.

The half-sisters to 1,000 Guineas heroine Mother Earth and 2,000 Guineas scorer Poetic Flare are catalogued as lots 117 and 120 respectively, and rate among the biggest eyecatchers among the 444 yearlings in this year's Orby offering.

First up comes the Sioux Nation sibling to Mother Earth, whose Newmarket strike was supplemented by success in the Prix Rothschild, while another sibling, Night Colours, also won the Group 2 Premio Dormello.

The filly, who is being consigned by Whitehall Stud, was bred in Tipperary at Grenane House Stud, the family-run operation headed up by Mark Wallace. Having enjoyed Group 1 success as a breeder and trainer, Wallace knows better than most the contrasting emotions generated by big days on track and big days at the sales. 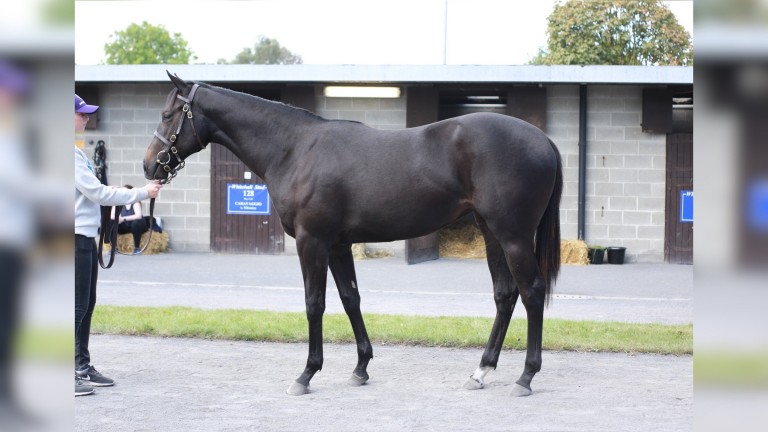 "With Mother Earth you know that Aidan [O'Brien] is going to have got it right," he said. "So when she goes to the races and you've got the best jockeys in the world like Frankie Dettori or Ryan Moore riding, and the best trainer in the world doing the training, it makes it enjoyable.

"With our filly here you're always worried something is going to go wrong. After training myself I know only too well that if it can go wrong, it normally does! But it's lovely to have a filly like her around the place. It's great to have something there's a bit of interest in, and when you go into Goffs there's a picture of Mother Earth around every corner."

On the filly herself, who was born on March 30, Wallace said: "She's all quality. She's scopey with a good action and definitely looks like she'll make a two-year-old.

"She carries her head exactly the same as Mother Earth, they both have a really low head carriage when they're walking, which is always nice to see. She's probably not as big as Mother Earth was at this stage but she's still growing, so she's getting there. She was good in her prep and her x-rays and scope are good so fingers crossed." 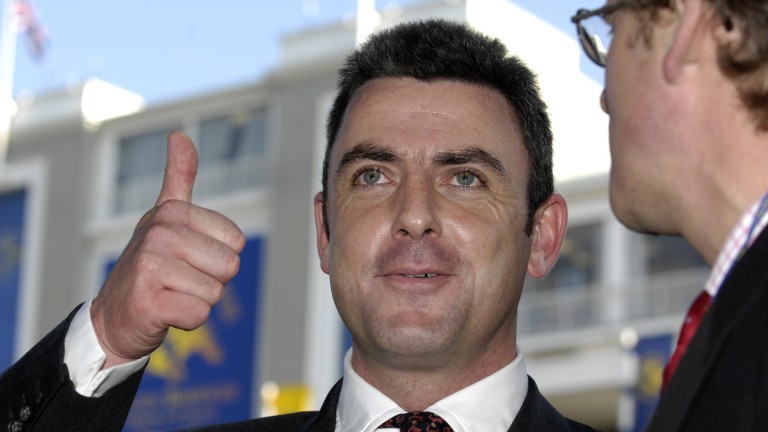 The youngster's page is already replete with bold black type, being a daughter of a Listed winner and a sibling to fillies who have struck in Group 1 and Group 2 company, while the likes of Dandy Man and Anthem Alexander appear further back in the pedigree.

There is a distinct possibility there could be more to come too, as there is a Zoffany full-brother to Mother Earth on the ground at Grenane House, while the dam, who Wallace reported to be in rude health, is safely in foal to No Nay Never.

A busy and productive campaign for Poetic Flare, not only winning the 2,000 Guineas and the St James's Palace Stakes but hitting the frame in the Irish 2,000 Guineas, the Sussex Stakes, Prix Jacques le Marois and the Irish Champion Stakes, has kept spirits high at Clare Castle Stud, who offer the US Navy Flag half-sister to Jim Bolger's latest homebred celebrity.

"It's been very exciting watching Poetic Flare, he's done us proud and we've been lucky that Mr Bolger ran him so often as we've had excitement all through the year," said Ben Avenel, who manages the Tipperary farm on behalf of owners, the senior Coolmore figures Harry King, Maurice Moloney, David O'Loughlin and Dermot Ryan. "He's been so consistent too and he's given us a good boost this season." 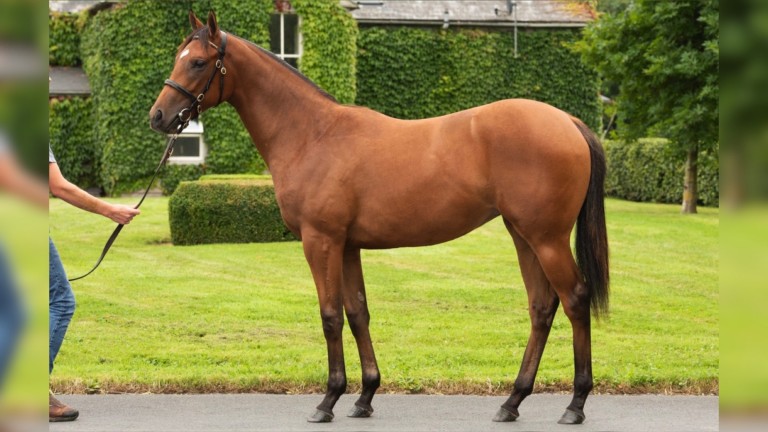 Dam Maria Lee joined the Clare Castle broodmare band in 2018 when Poetic Flare was still a foal having been signed for by Cormac McCormack at €65,000. The relation to Teofilo was already the dam of dual Listed scorer Glamorous Approach by that point, but Avenel explained that her sire, Rock Of Gibraltar, was also of particular appeal.

"Rock Of Gibraltar has done very well as a damsire, particularly with horses like Kameko now, so we were looking for a mare by him. Maria Lee was a nice proven mare so we said we'd send her to US Navy Flag to support him in his first year.

"She complemented the stallion so we thought it was a perfect match and we've been very lucky to get this very nice filly from the mating. All the updates this year have been great and all the credit must go to Mr Bolger for breeding and training Poetic Flare."

Further updates could also be on the cards as Avenel revealed that Maria Lee has had some exciting coverings since producing the US Navy Flag filly. He said: "She has a lovely Magna Grecia colt, he's a big walker with a nice head, and she's in foal to Camelot, so we're looking forward to seeing her foal next year, especially after Luxembourg won the Beresford Stakes so impressively." 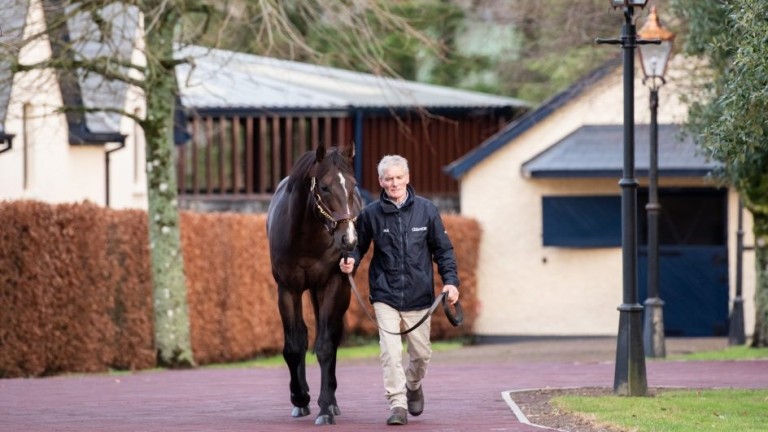 US Navy Flag: Coolmore's first-crop stallion is represented by a half-sister to Poetic Flare
Coolmore

On the filly's physique, Avenel said: "She's a strong filly who's a good walker, she's very light on her feet and has a good mind. She looks like a real two-year-old. She was bred, born, raised and prepped at Clare Castle and we've been very happy with her the whole way through. She's been very straightforward and never turned a hair during her prep so we're hoping for the best this week.

"There's no pressure. The filly is very nice so she's doing the job herself. Hopefully we'll find a few people who are interested in her and we'll see what she makes."

Both Avenel and Wallace have been on the ground at Kildare Paddocks over the weekend and reported that there has already been plenty of footfall during the early days of inspections.

FIRST PUBLISHED 4:30PM, SEP 26 2021
After training myself I know only too well that if it can go wrong, it normally does!