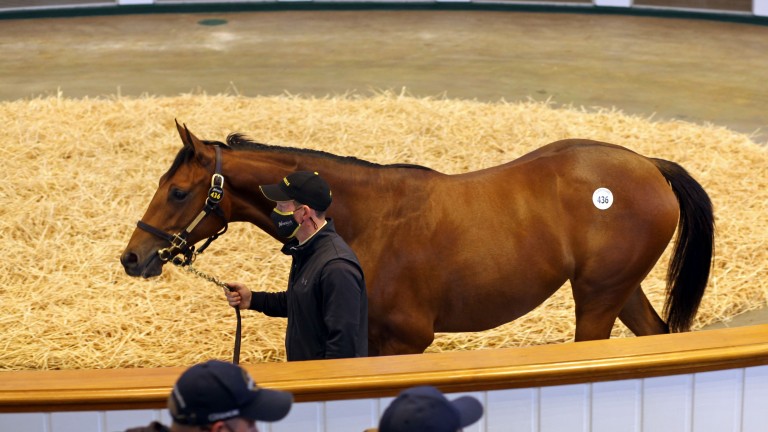 Newsells Park Stud in Hertfordshire is home to one of the strongest commercial broodmare bands anywhere in the world, with the dams of myriad Group 1 winners and countless high-value yearlings residing among the farm's 1,200 acres.

Since 2010, 12 individual top-flight winners have been born or raised on the stud, which is owned by the Jacobs family.

The grande dame at Newsells Park is undoubtedly Shastye, dam of full-siblings Japan, Mogul and Secret Gesture. The Danehill half-sister to Arc hero Sagamix has now generated a staggering 14,200,000gns in yearling receipts at Tattersalls alone, after her latest Galileo filly went the way of MV Magnier for a sales-topping 3,400,000gns at Book 1 last year.

Unfortunately the 20-year-old is not in foal, having been barren to Galileo and then losing her pregnancy to Dubawi last year. Nonetheless, she is set for a return visit to the Dalham Hall Stud resident in the coming weeks.

"When we did our pregnancy checks towards the end of last year she wasn’t in foal," says Julian Dollar, general manager at Newsells Park Stud.

"That was a blow, but we’ve taken the view that we’d like to go back to Dubawi this year. We’d love to send her to Galileo but, when you weigh it up, she’s been barren to him three years out of the last four and neither of them are getting any younger. She's such a valuable mare to us that we feel we should keep her at home."

As well as her progeny's phenomenal achievements on the racecourse and in the sales ring, Shastye has also begun forming her own dynasty within the Newsells Park broodmare band, which now contains three daughters. 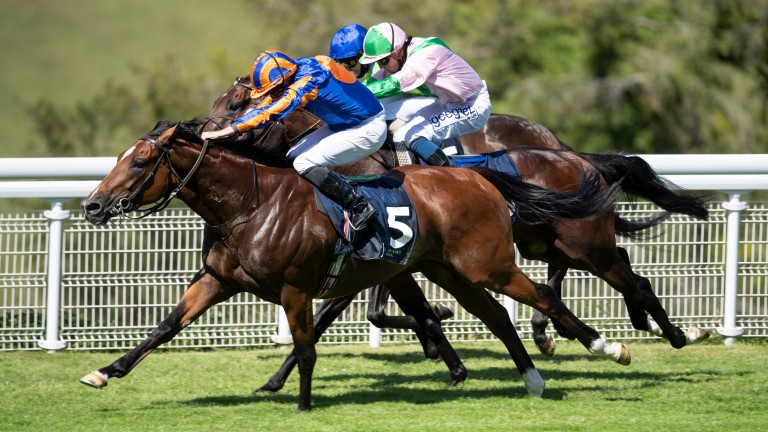 Secret Sense is still awaiting her first runner, although she has a three-year-old Oasis Dream colt (Westminster Abbey) with Todd Pletcher and a two-year-old son of Showcasing (Flying Secret) with Eve Johnson Houghton. The winning daughter of Shamardal also has some exciting youngstock on the ground.

"Secret Sense hasn't had a runner yet but she has a Kingman yearling filly who I rate very highly, she's one of our nicest yearlings this year," says Dollar. "She's just produced a Too Darn Hot filly foal who's a monster, she came out at 68 kilos and is a belting foal.

"This year she's going to Camelot, who's done well with Shamardal mares, Latrobe is an example of that. The idea of a Classic sort of filly with a Classic stallion seems to make a lot of sense. We're not trying to reinvent the wheel with this family, they're all Classic types so we're sticking with it."

There is also Secret Gaze, a full-sister to Secret Gesture, Japan and Mogul who is owned in partnership with Qatar Racing.

Dollar says: "She's got a Lope De Vega yearling, who really reminds me of Shastye and Secret Gesture, and she's in foal to Siyouni. We're going to send her to Dubawi, who's crossed so well with Galileo mares."

That pair are joined by another of Shastye's brood in Secret Soul. The daughter of Street Cry has been mated exclusively with Nathaniel since 2019, but this year is due to visit Too Darn Hot. 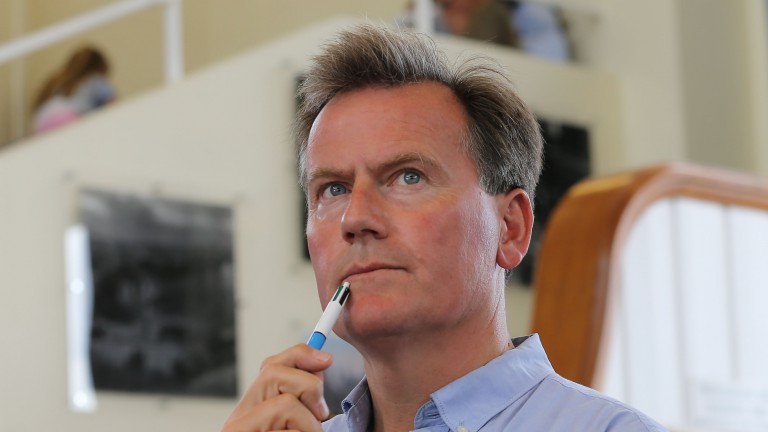 Julian Dollar: "The idea of a Classic sort of filly with a Classic stallion seems to make a lot of sense"
Laura Green

Dollar says of the 12-year-old daughter of Monsun: "Waldlerche is currently in foal to Galileo, which is exciting as she's carrying a full sibling to Waldgeist.

"She is due to foal very late but we've pencilled her in to visit Frankel. We're tying in with the Galileo angle by using potentially his best sire son. That's the main thing, but we thought a Monsun mare might work well with Frankel too."

Waldlerche is joined by Waldlied, a three-parts sister to Waldgeist who landed the Group 2 Prix de Malleret during her own racing career.

Dollar says: "She's had her first foal, an absolute cracker of a Kingman colt. She's in foal to Siyouni but is very late too so will probably be rested this year."

There is every chance that this already illustrious family could gain further laurels this year too, as the highly regarded Waldkonig, a son of Kingman, remains in training with John Gosden, while Wildfeder, a three-year-old sister to Waldgeist, is with Andre Fabre. 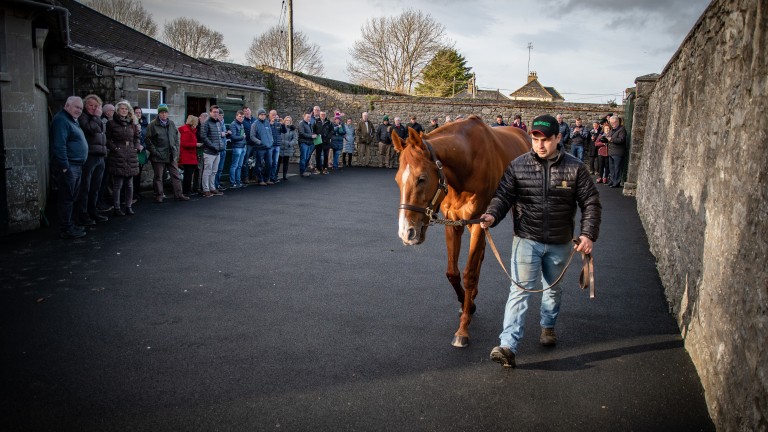 The 21-year-old Waldmark, dam of Waldlerche and her St Leger-winning half-brother Masked Marvel, is still part of the Newsells Park herd.

Dollar, who refers to the daughter of Mark Of Esteem as 'Granny', says: "Waldmark, who is very close to our hearts, is in foal to Sea The Stars again. The colt we sold by him last year was a lovely horse and so, even in her dotage, she might go back to Sea The Stars again this year. She's believed to be carrying a colt and we'd really like a filly."

Other daughters of Waldmark are also breeding away at Newsells Park, including the Listed-winning Waldnah, who is in foal to Siyouni, and the recently retired Waldfabel. Both will visit Ballylinch Stud's linchpin sire Lope De Vega in 2021.

Newsells Park have been long-standing supporters of Lope De Vega, who has now sired 12 Group/Grade 1 winners and will stand this season at a career-high fee of €125,000. Also due to visit the son of Shamardal is the 16-year-old Yummy Mummy, a daughter of Montjeu best known for producing Coolmore's three-time Group 1 winner Legatissimo.

"Yummy Mummy is expecting a Lope De Vega foal shortly and she's going to go back to him," says Dollar. "She's believed to be carrying a colt and we'd like a filly. We thought he'd done well with mares by Montjeu when we looked at the stats, producing Group winners like Blue De Vega and La Barrosa.

"He'd also had four stakes winners from five runners whose dams are out of a mare by Shirley Heights, including the Grade 1 winner Capla Temptress and Group 2 winner Spanish Whisper.

"Yummy Mummy's last three foals have all been by Dubawi. The colts Never Alone, a 1,200,000gns buy by Godolphin, and the 500,000gns Sifting Sands, who went to Chad Brown for Peter Brant, as well as a two-year-old filly who has been retained." 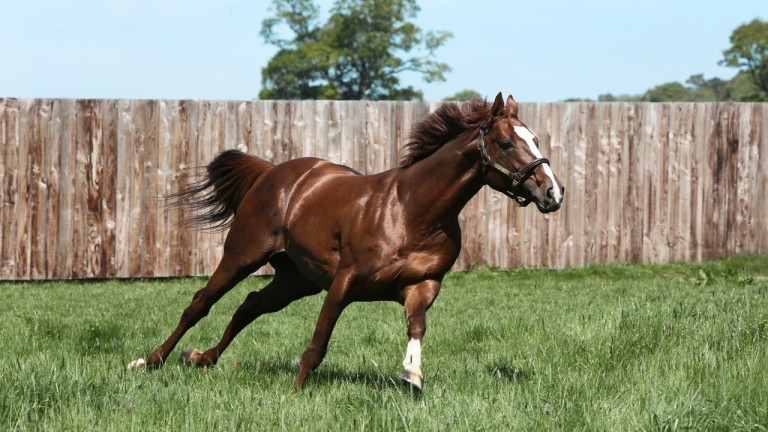 Shastye and Yummy Mummy are among those who have rewarded Newsells Park's substantial investment in its broodmare band, with the former bought for 625,000gns and the latter 460,000gns.

Another noteworthy name added to the team at considerable expense was Duke of Cambridge Stakes winner Aljazzi, who set an Autumn Horses-in-Training Sale record when signed for at 1,000,000gns. The daughter of Shamardal delivered her first foal, a filly by Galileo, last year and has an exciting covering lined up this year.

"Aljazzi is an interesting mare," says Dollar. "Sadly she was barren to Dubawi last year but she's going to go to Kingman this time around. We like the idea of Kingman crossed with Shamardal. Obviously it's early days and Kingman hasn't been mated to Shamardal mares that many times, but we think that's a nice cross." 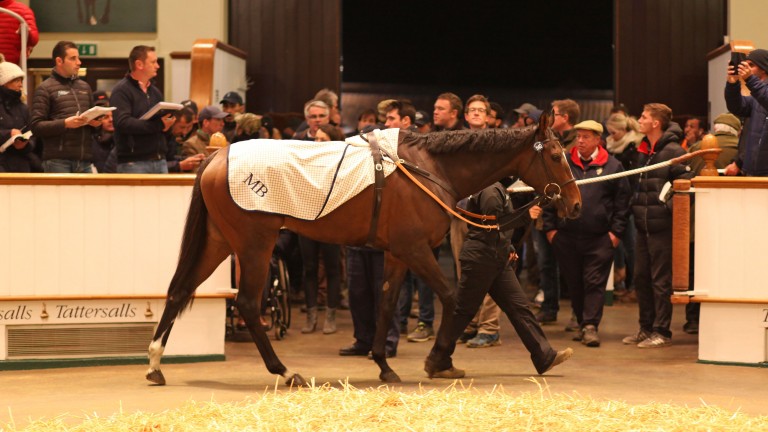 Dollar says of the other notable members of the broodmare band: "Birdwood, an Oasis Dream half-sister to Enable, is finally carrying a Nathaniel and she's got a date with Pinatubo. We like the idea of Shamardal with Birdwood, she has a yearling colt by him and Shamardal with Oasis Dream has already been quite a successful cross.

"Spectre has a Galileo two-year-old colt who is with Hugo Palmer, a Dubawi yearling colt and is due late to Frankel, so we're looking to rest her this year. She's a very attractive, well-made mare and I'm interested to see how Siyouni performs as a broodmare sire."

He adds: "Luminate, who we own with Merry Fox Stud, has a Galileo yearling filly who might well be kept to race. The mare is in foal to Dubawi and, all being well, will visit Dubawi again. He's got good form with mares from the Invincible Spirit line.

"We also own Shambolic with Merry Fox, she's in foal to Frankel and is due to visit Kingman this year."

As well as the blue-chip broodmares, Newsells Park is also home to two stallions, namely Nathaniel and new recruit Without Parole. The latter, the St James's Palace-winning son of Frankel, is set to come in for strong home support from both Newsells Park and his owner-breeders, John and Tanya Gunther.

"They've got belief in this horse and are going to back him all the way. We're sending seven or eight, while they're sending ten or 11 and his book is filling up nicely."

Newsells Park are supporting Without Parole with the likes of dual Grade 1 winner Dynaforce, already the dam of the classy Aljezeera, proven black-type producers Lady Eclair and My Special J's, the well-bred As Good As Gold, and Date With Destiny, the only progeny of the late, great George Washington. 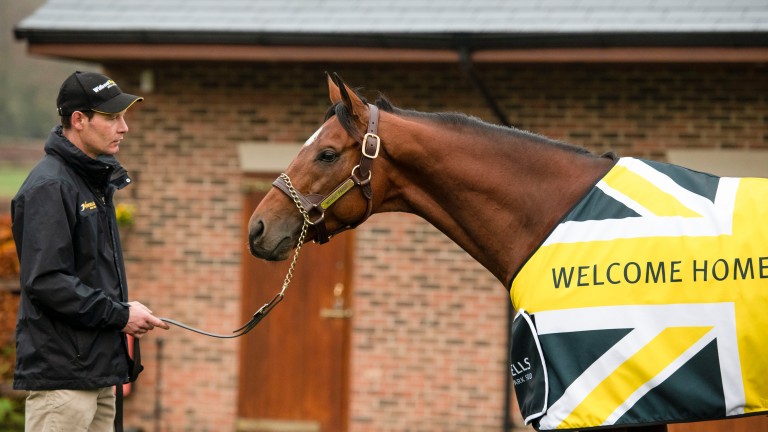 "Date With Destiny made a great start with Beautiful Morning but she's had a couple of quieter years since," says Dollar. "She has a nice Churchill filly, who's gone to Simon Crisford, and she'll visit Without Parole, who I think she'll really suit."

Nathaniel, sire of the brilliant Enable and fellow Group 1 winners Channel and God Given, will stand his ninth season at a trimmed fee of £15,000. Dollar expects the son of Galileo to be popular, though noted that his progeny's exploits over hurdles - with Burning Victory and Concertista supplying a Cheltenham Festival double in 2020 - have not gone unnoticed by jumps breeders.

"He's such a genuine horse and does everything you want him to do," says Dollar. "The mental side is arguably the secret to all these good stallions. He's more than proven himself and is going to be a busy boy this year.

"Partly because of Covid and Brexit we have reduced his fee, we thought that was the right thing to do in the circumstances. Obviously that has made him more accessible for National Hunt breeders and a small percentage of his book will be jumps mares."

FIRST PUBLISHED 6:03PM, FEB 21 2021
We're going to send her to Dubawi, who's crossed so well with Galileo mares