James Thomas sees a busy day of trade at Tattersalls

Bloodlines do not come much better than being by a Derby winner and out of an Oaks heroine, and that is precisely the breeding boasted by the 300,000gns top lot at Monday's Tattersalls December Yearling Sale.

The colt in question is by Sea The Stars and out of Talent, and it was Anthony Stroud who struck the winning bid for the Ashbrittle Stud-consigned youngster. The colt, who was bred in partnership by Ashbrittle and Mark Dixon, is the fourth foal out of Talent, whose first offspring is the Group 2 Prix Corrida winner Ambition.

The youngster, who is inbred 2x4 to the brilliant blue hen Urban Sea, was making a belated first appearance at public auction having been withdrawn from Book 1 of the Tattersalls October Yearling Sale earlier this year.

"He's a nice horse who needs a bit of time," said Stroud, who has spent much of sales season sourcing future stars for Godolphin. "But he's by a Derby winner and out of an Oaks winner and Ambition has done very well. He had a haematoma on his off hind, that's why he didn't make Book 1. 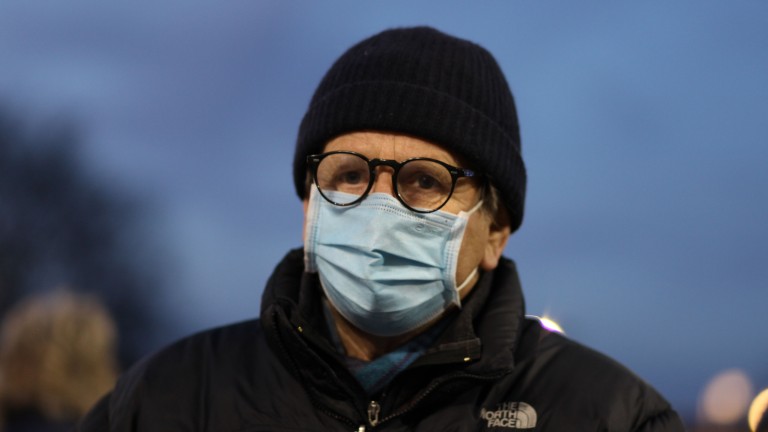 "I'd seen him as a foal and had seen how he'd been progressing but he's always been a very nice horse. He's going to be trained by John Gosden."

Talent landed the 2013 Oaks while in training with Ralph Beckett and went on to finish runner-up to Leading Light in that year's St Leger. The daughter of New Approach visited Ballylinch Stud's rising star sire Lope De Vega earlier this year.

Trade proved solid throughout the session, and although 25 fewer offered lots saw turnover dip by four per cent to 3,986,300gns, the clearance rate was a healthy 86 per cent as 122 yearlings found a new home. In turn, the average rose by three per cent to 32,675gns, while the median dropped by 20 per cent to 20,000gns.

Buyers have a final opportunity to purchase yearlings this year at the Tattersalls Ireland November Flat Foal and Breeding Stock Sale, which takes place on December 16 and has 116 yearlings catalogued.

It took all of five lots for the six-figure barrier to be broken as Harry McCalmont of Norelands Stud, stationed outside by the parade ring, landed the Sea The Stars filly out of Alla Speranza with a bid of 260,000gns. Bred by Kirsten Rausing and the Tsui family's Sunderland Holdings, the filly hails from one of Lanwades' most prolific families.

Alla Speranza, a Group 3-winning daughter of Sir Percy, is the dam of City of York Stakes scorer Shine So Bright and is out of the Listed winner Alvarita, who in turn produced the Noblesse Stakes victress Altesse.

Alvarita is a daughter of Rausing's brilliant Alborada, winner of successive renewals of the Champion Stakes, while Alborada is, of course, a sister to Albanova, a champion in Germany after three Group 1 victories and now the dam of major talents such as Algometer, Alignak and All At Sea.

Such a page would not have looked out of place at Book 1 of the Tattersalls October Yearling Sale and that was where the filly had been due to be auctioned prior to being withdrawn. She was sold on Monday through The Castlebridge Consignment. 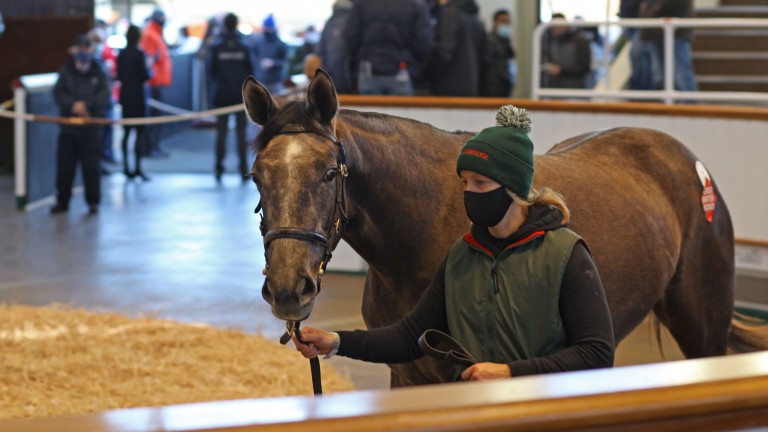 "She's been bought by a partnership between Norelands and Craig Bernick of Glen Hill Farm," said McCalmont after getting off the phone to Hubie de Burgh. "We both had a good yearling sale season and we're trying to bring in some new blood to the farm.

"She's a very nice filly and comes from a very good farm. There's a huge number of fillies breeding on the page and they're all being bred to the best stallions. Hopefully she can race and we can add her to the broodmare band in time."

McCalmont was on the opposite side of the docket on this occasion having seen Norelands sell three lots for 2,530,000gns during Book 1, including the 2,000,000gns Frankel half-brother to Golden Horn bought by Godolphin.

The County Kilkenny-based operation also sold eight lots for 1,375,000gns during Book 2, a list topped by the Frankel filly out of Love Is Blindness who, coincidentally, went the way of Bernick's Glen Hill Farm for 460,000gns. 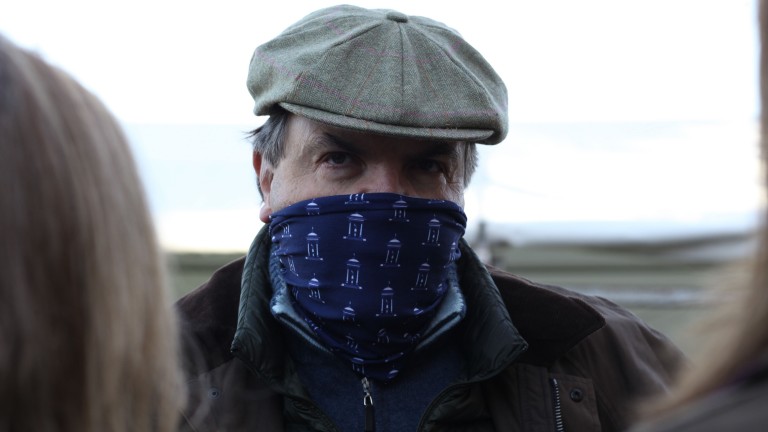 McCalmont added of the Sea The Stars filly: "Members of this family don't come up that often and it's been very well managed by Kirsten and her team.

"Coolmore have a branch and Juddmonte have a branch, and now we have a branch of it too! She's by a sire that we love and use a lot so we're pleased to have her. I've spoken to Mr Gosden and I'll speak to him again but hopefully she'll go to him."

A bid of 260,000gns comfortably surpassed the high mark at last year's December Yearling Sale, which was set by Sun Bloodstock, who went to 200,000gns for the Dubawi colt out of Voleuse De Coeurs.

Arguably no lot boasted a more current page than Knockatrina House Stud's Starspangledbanner half-sister to this year's Cheveley Park Stakes heroine Alcohol Free, and the filly lived up to expectations when knocked down to Daniel Creighton of Creighton Schwartz Bloodstock at 130,000gns.

Creighton could not reveal the identity of the filly's new owner, but said she would likely head into training in Britain.

"The sister has done really well this year and she's by a stallion who's done very well as well," he said. "Hopefully it all adds up to her being a very good filly on the track and eventually being a nice broodmare as well. She's a lovely big filly and has a lot of quality. 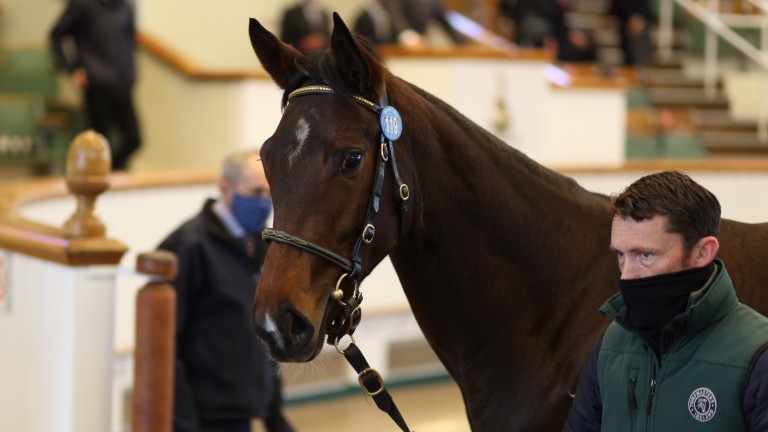 "I'd say she'll be a midsummer or backend sort of filly. She's been bought for a new client but I don't know who'll train her yet. She'll go into pre-training with my brother and we'll see after, though I'd imagine she'll remain in Britain."

The six-figure filly was bred by Jossestown Farm and is out of Plying, who was acquired for €21,000 at the 2018 Goffs November Breeding Stock Sale when offloaded by Churchtown House Stud. As well as Alcohol Free, the daughter of Hard Spun has produced the Listed-winning Alexander James.

The filly was pinhooked by Canice Farrell through Pegasus Bloodstock when picked up for €40,000 at the Goffs February Sale earlier this year.

"We were lucky enough that Alcohol Free came along," said Farrell. "This filly was entered in an earlier sale but had an over-reach. It stood to her as she needed the time. She has a phenomenal temperament - and appetite!"

Hillwood Stud recorded a huge result at Book 1 when the Lope De Vega colt out of Moi Meme was knocked down to Godolphin at 900,000gns, and the stallion did the Vigors' operation another good turn on Monday when Andrew Balding went to 130,000gns for the colt out of Stone Roses.

"The stallion has done tremendous things and he's an exciting horse to get," said Balding. "He's been bought for some existing clients who have had a bit of luck with Lope De Vega. He's been good to us and hopefully we have some really nice ones coming through. There was lots to like about this colt." 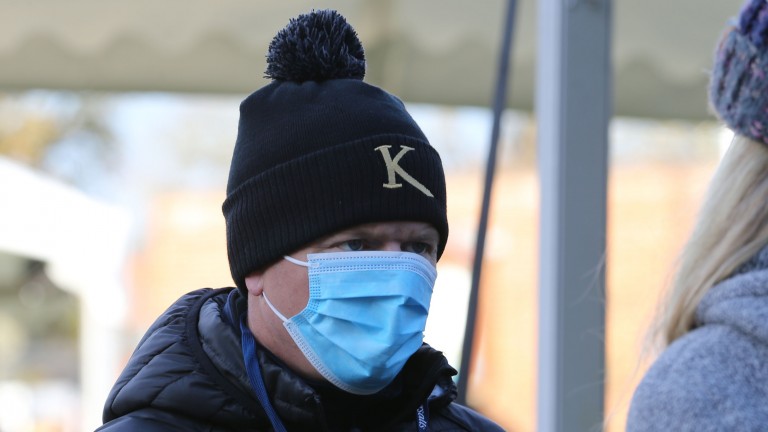 Andrew Balding: "He's been bought for some existing clients who have had a bit of luck with Lope De Vega"
Laura Green

Stone Roses, a Listed-winning daughter of Rip Van Winkle, joined the Hillwood broodmare band at a cost of €280,000 at Arqana in 2016, and could well be set to repay that investment as the eight-year-old has more progeny of Lope De Vega in the pipeline.

"We've had a good year with Lope De Vega, although I think he's been good to most people who have been lucky enough to be involved with him," said Charlie Vigors.

"We've been big supporters of his and it's paying off. The mare has been producing some nice stock too, now they have to go and prove it on the racecourse. She's got a Lope De Vega filly foal and is in foal to him too, she's another of ours who's been on the Lope De Vega programme!"

Another lot by Sea The Stars brought a six-figure sum when Charlie Gordon-Watson went to 125,000gns for the colt out of Crysdal offered by New England Stud.

The March foal is out of a daughter of Fillies' Mile heroine Crystal Music, meaning the dam is a sibling to four black-type performers and the dam of Ocovango.

The page traces back to Crystal Spray, herself the dam of high-class talents such as Solar Crystal and State Crystal, who is also the grandam of Prix Jean Prat scorer Zelzal.

"It's a family I know well, going back to the days when I bought Crystal Spray," said Gordon-Watson. "Obviously I like the stallion, Sea The Stars is a very good sire, and he looks good value for a nice horse."

Also going beyond the six-figure mark was Croom House Stud's Dark Angel filly who was knocked down to Demi O'Byrne, who signed as O'Byrne and Grassick/Dan Hayden at 115,000gns.

"She's a lovely filly, we really liked her, and she goes into training in Ireland," said Sean Grassick.

The filly was another lot to boast a recently enhanced page as she is out of Loreto, a Holy Roman Emperor half-sister to Cabaret, dam of 2,000 Guineas hero Magna Grecia and his Dewhurst Stakes-winning half-brother St Mark's Basilica.

Patrick Cooper snapped up another of the session's more eyecatching lots when the BBA Ireland man went to 105,000gns for the New Approach colt out of La Superba offered by Mount Coote Stud.

"He's been bought for Alpha Racing and goes to Jessica Harrington," said Cooper. "He's a lovely horse and we were looking for a three-year-old type so hopefully he'll turn out to be a nice mile and a half horse.

"He'll need a bit of time but he's a lovely horse. Alpha Racing have had Cadillac this year, which has cheered everyone up a bit, and hopefully Mrs Harrington can work her magic again."

Bred and raced by Mark Dixon and Mount Coote's Luke Lillingston, La Superba, a Medicean half-sister to Doncaster Cup winner Thomas Hobson, won three races during her time in training and hails from the same family as Oaks heroine Talent, who supplied the top lot.

Lillingston went on to explain how Monday's sale proved to be a change in fortunes for the colt. 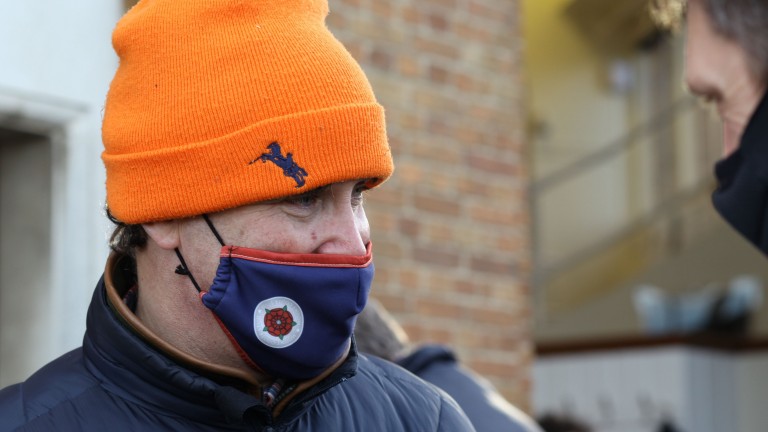 "He's a horse we've always loved," he said. "It was a very deliberate mating to replicate the cross with Talent. He came here for Book 2 and was showing really well for the first day but then spiked a temperature and we had to withdraw him. Damian Flynn and Emma Foley [Redgate Bloodstock] have had him for the last five or six weeks and have done a super job. Emma was an old Mount Coote girl once upon a time and they do a great job.

"When the horse was sick on the grounds our team were up almost all night with him, particularly Paul Carey. Book 2 was so strong that we were disappointed not to be part of it with this horse, but thankfully the market has valued him today. He's going to go to Jessie's, which is the cherry on the icing on the cake!"

FIRST PUBLISHED 6:03PM, NOV 23 2020
I'd seen him as a foal and had seen how he'd been progressing but he's always been a very nice horse. He's going to be trained by John Gosden