James Thomas reports from day one at Tattersalls 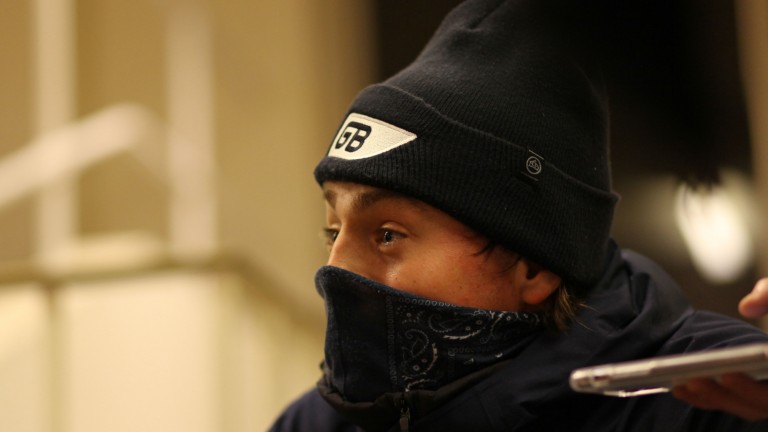 Big bids came thick and fast during a rock solid opening session of the Tattersalls December Mare Sale on Monday, as 37 lots brought a six-figure sum.

Sitting at the head of the market at the close of play was Aunty Bridy after the Group 3-placed juvenile brought a bid of 410,000gns from Sam Haggas of Hurworth Bloodstock.

Having run just three times, winning a Curragh maiden on debut for Jim Bolger and last seen finishing runner-up to Elysium in the Weld Park Stakes, Haggas said the daughter of Camacho had been bought to continue her racing career for an undisclosed US-based owner.

"There's no plan as of yet," said Haggas, having seen off the attention of Andreas Putsch of Haras de Saint Pair and Oceanic Bloodstock's Michel Zerolo. "She could stay here for the short term or she could go to America. 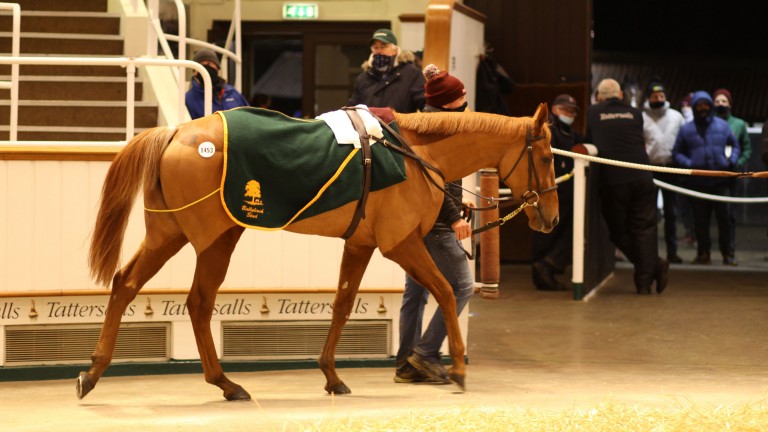 Aunty Bridy in the limelight at Park Paddocks
Laura Green
"She's a good-looking, lightly-raced filly. Her form is good and hopefully there's a bit more racing in her. She by a prolific sire of fillies too so fingers crossed there's more to come from her."

Yoshida back in action

Katsumi Yoshida of Northern Farm in Japan has made some noteworthy December Sale purchases down the years, including the likes of Reve D'Iman, Euro Charline and Donna Blini.

Despite a series of Covid-19 related travel restrictions having impacted the normal level of international attendance at this year's edition of the sale, Yoshida's name also appeared on the docket of Calming Effect, who fetched 400,000gns. 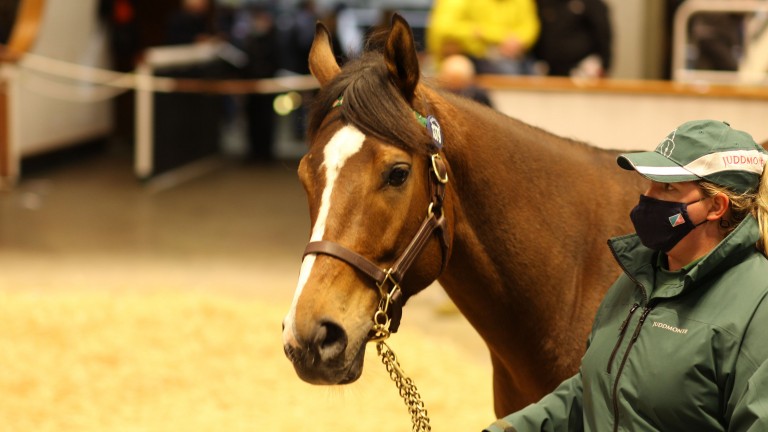 Lot 1,379: Calming Effect in the Park Paddocks ring before being signed for by Katsumi Yoshida at 400,000gns
Laura Green
The unraced daughter of War Front was offered as part of the Juddmonte draft, which took centre stage with receipts totalling 1,852,500gns for 17 lots sold. The four-year-old, who was presented in foal to Frankel, is out of Emollient, a winner of four Grade 1 contests in the US who hails from the Niarchos family of Machiavellian, Bago and Maxios.

"Her conformation is very good and having a Frankel cover is very attractive for us in Japan," said Northern Farm representative Shingo Hashimoto. "She also matches the stallions we have in Japan very well, so we’re very excited we have bought her.

"We haven't decided who she’ll be mated with next but we have many good sires to choose from. It’s an honour for us to buy a mare like this from Juddmonte." 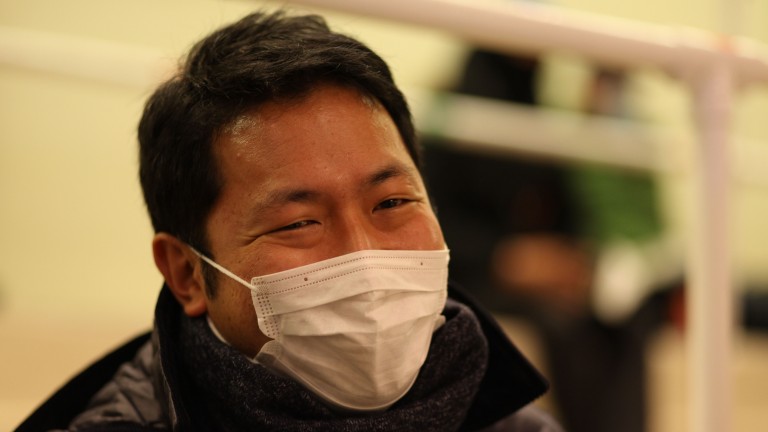 Shingo Hashimoto: signed on behalf of Northern Farm's Katsumi Yoshida
Laura Green
Despite Covid-19 restrictions having curbed plenty of travel plans, Hashimoto said his own journey to Newmarket had not been impacted.

"It's a difficult time for everyone as regards travel and I need to isolate when I get home, but travel has been as straightforward as possible and everyone has been very helpful," he said.

During last week's December Foal Sale owner and breeder Graham Smith-Bernal sold his Sea The Stars colt out of Nadia Glory to Sunderland Holdings for 170,000gns through Newsells Park Stud.

On Monday the proceeds of that sale were reinvested as Smith-Bernal went to 330,000gns for Firelight through agent Jill Lamb. The winning four-year-old was offered in foal to Almanzor by West Blagdon Stud, and plans now call for her to join Nadia Glory at Newsells Park.

"She was a good race filly and is a beautiful looker," said Lamb, who noted the similarities between Firelight and Nadia Glory's respective pedigrees. "I bought her for Graham Smith-Bernal. He's already got an Oasis Dream mare out of a Galileo mare and we managed to sell the Sea The Stars colt foal for 170,000gns last week, so we might look to go down that route again. 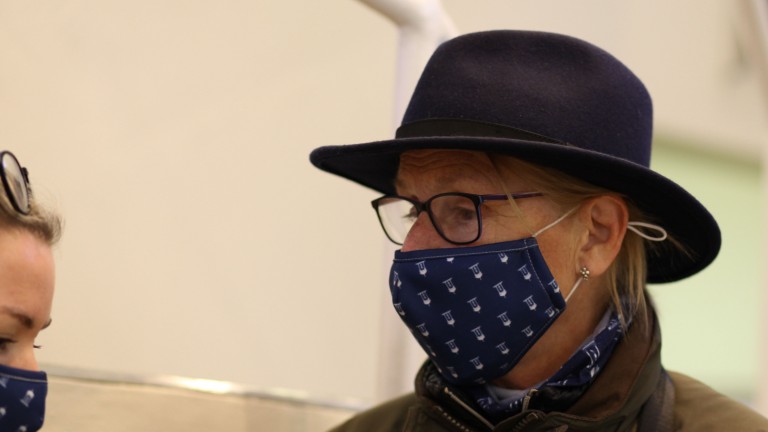 Jill Lamb: signed for Firelight at 330,000gns
Laura Green
"She's in foal to Almanzor; we like him a lot and this looks a very suitable covering. I loved the Almanzor yearlings too. Graham has three mares at Newsells at the moment and this will make it four. He's had horses in training for several years but the broodmares are a relatively new thing for him."

Smith-Bernal, who has developed two business empires built around cutting-edge litigation technology software, has had runners this year with the likes of John Ryan, William Haggas and Charlie Fellowes, with his colours having been carried to success by useful staying handicapper Hiroshima.

BBA Ireland's Michael Donohoe struck a winning bid of 260,000gns for It's Magic, a three-year-old half-sister to Mukhadram offered in foal to Ten Sovereigns by Baroda Stud.

The daughter of Galileo did not make the racecourse for Aidan O'Brien and the Coolmore partners, but what she lacks in race record she makes up for in pedigree, as she is also a half-sister to the Group 3-placed Woodland Aria, while her dam, Magic Tree, is a half-sister to Group 1 winners Kirklees and Mastery. 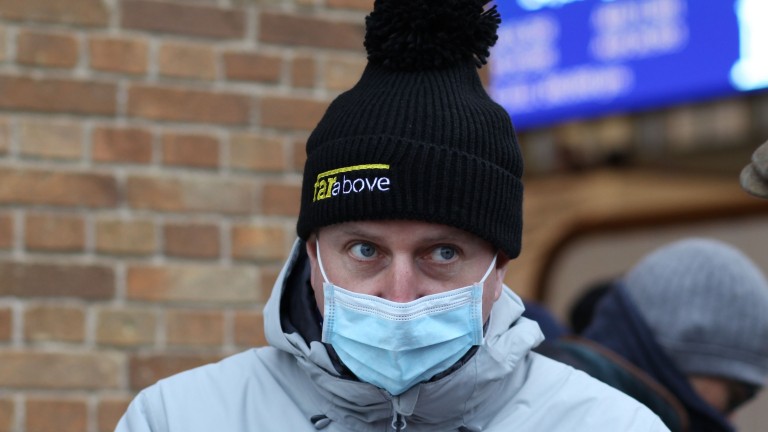 Michael Donohoe: "We've been thinking of something like Siyouni for her next cover"
Laura Green
"She's a Galileo mare and we all know what Galileo can do," said Donohoe. "She's a very good physical and should be easy enough to mate. She's got a good covering too, Ten Sovereigns is an exciting prospect, and it's a good tough family.

"She was bought for a client in the Middle East who has a few mares in Ireland, so she'll probably go back to Baroda Stud to board there. We've been thinking of something like Siyouni for her next cover - that cross has done very well this year."

Brendan Hayes of Knocktoran Stud returned to familiar territory when going to 240,000gns for the Godolphin-consigned Donnybrook, a winning daughter of Invincible Spirit and the Group 3-winning Whipper mare Mayhem. In turn, Mayhem is out of Kilfrush Stud's famed producer Hit The Sky, who was under Hayes' care as Kilfrush's managing director from the early 1980s until its sale in 2013.

Mayhem is a sister to Group 2 Prix Daniel Wildenstein winner Royal Bench and a half-sister to Ormonde Stakes scorer Memphis Tennessee, while further back it is the family of the prolific Cerulean Sky. 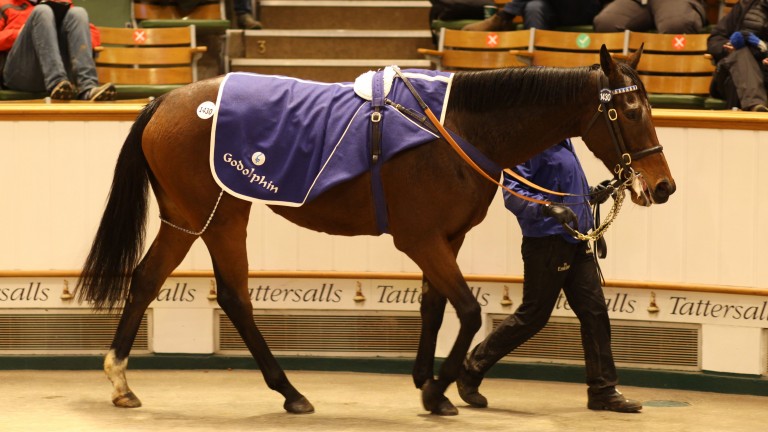 Donnybrook brings 240,000gns from Knocktoran Stud
Laura Green
"Most people are happy to buy what they know," said Hayes. "It's my son, Jonathan, who's bought her really, I was just doing the bidding. He wanted to buy her so hopefully she'll be lucky for him. She's a very good-looking filly and she had a bit of ability.

"It's nice to return the favour with Darley because they're a huge help to everyone in the industry, it's really great to be able to give them a good price for something they're selling. The plan is to get her in foal early, although we haven't really chosen a sire just yet - it'll be something fast though."

Donnybrook was bred by the Mayhem Syndicate and joined the Godolphin fold at a cost of €900,000 at the 2018 Arqana August Sale.

The first batch of Juddmonte horses into the ring brought a couple of the session's early highlights, including when Tom Blain of Barton Stud went to 220,000gns for Desirous, a winning daughter of Kingman and the Matron Stakes scorer Emulous. The four-year-old was offered in foal to Frankel.

"She's for a client of mine called Faisal Mishref, who's from Saudi Arabia," said Blain. "He's been a very loyal client of Barton Stud's. He had a very good yearling sale and he loves supporting Juddmonte."

Blain went on to explain that his client has been breeding on a small scale for a number of years, but having enjoyed a fruitful round of yearling sales was looking to upgrade the quality of his small but select broodmare band. 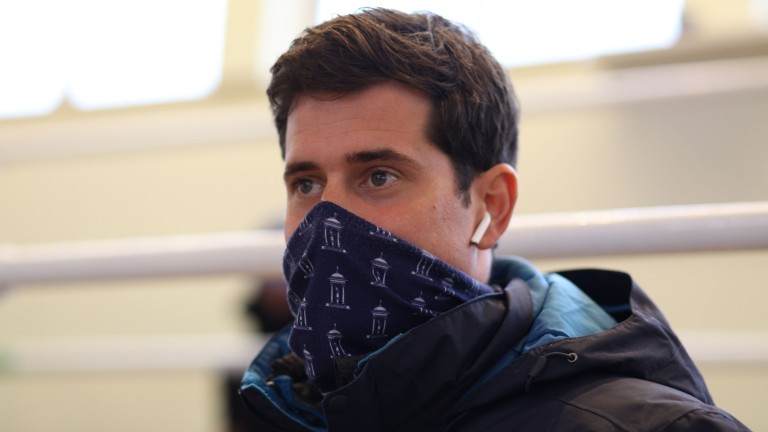 Tom Blain: "We'll try and make a proper mare out of her"
Laura Green
"He has between two and four mares at any one time but we're trying to keep the quality high," he said. "We started off buying cheaper mares but he's had some good results at the yearling sales so we're trying to up the quality. He also had some horses in training last year and he's a real believer in the game so I'm really pleased he's got this mare.

"She has a brilliant pedigree and was a good race filly herself and she's in foal to a champion. She'll come back to Barton now and we're very much looking forward to having her. We haven't thought as far ahead as who she'll be covered by next year but she'll be well mated. We'll try and make a proper mare out of her."

Durcan back among old friend

A few lots before Desirous sold, Ted Durcan went to 160,000gns for Amser, a Frankel half-sister to Timepiece, Passage Of Time - who is also the dam of Time Test - and Father Time.

The page was enhanced further just hours before Amser sold as Viadera, who gave Bated Breath a first top-level winner in the Grade 1 Matriarch Stakes, appears beneath the second dam, as does the redoubtable Twice Over.

"She's for Scott Heider in America," said Durcan. "She's a mare that I loved yesterday, Scott loved last night when he saw her and his racing manager Tony Lacy loved her too. We thought there's huge upside to her. She's got an unbelievable pedigree and a sexy cover too. It's so hard to buy into a family like that and there's loads happening too so we're over the moon to have her." 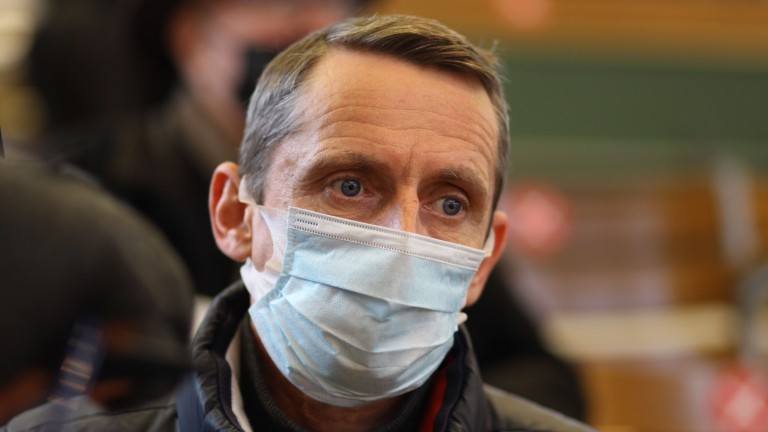 Ted Durcan: "We thought there's huge upside to her"
Laura Green
Heider, a real estate developer based in Omaha, has enjoyed a productive season with his boutique European racing string, most notably through the Joseph O'Brien-trained Pista, who won the Group 2 Park Hill Stakes before finishing runner-up in the Prix de Royallieu.

He also owns the Gallinule Stakes scorer Crossfirehurricane and the Listed-placed A New Dawn. The owner later tweeted that his new acquisition would head to Norelands Stud in County Kilkenny.

Durcan added that this is not the first time he has crossed paths with this family, having enjoyed a number successful link ups during his time in the saddle. He said: "It's a lovely family and I know the two-year-old out of Timepiece [Thaler] is at Sir Michael Stoute's and we like him. I've actually ridden a few of the family, including Passage Of Time, and I won the Craven on Twice Over so I know the family well."

Frank Fahy of Gerrardstown House Stud came to Tattersalls with a view to adding two mares to his Dunshaughlin-based broodmare band, and duly landed Golconda with a bid of 210,000gns and Mechanism at 200,000gns.

Golconda, a French-bred daughter of Planteur, was Listed-placed during her time with Christophe Ferland and was last seen finishing fourth in a Gulfstream claiming stakes for Robert Hess Jr. She was the only lot in the December Mare Sale catalogue carrying to US Triple Crown hero Justify.

"I like the mare and I like the cover," said Fahey. "I suppose after that, it's potluck! It's a rare cover to have over this side of the world. The Justify will be for sale in due course and she'll be going to a more local stallion next year.

"We'll just get her home, get her settled in and hope she has a nice Justify foal first though. After that we're in the lap of the gods. We came over to buy two and we've ended up with two on the first day, so we can go home now. The pressure is off."

Mechanism, offered in foal to Golden Horn, was another to emerge from the Juddmonte draft. The winning seven-year-old daughter of Zamindar is a half-sister to Amser, who went the way of Ted Durcan for 160,000gns earlier in the session.

The Tattersalls December Mare Sale continues on Tuesday at 9.30am.

Market proves anything but frosty at robust December Foal Sale

FIRST PUBLISHED 9:39PM, NOV 30 2020
I've actually ridden a few of the family, Passage Of Time and I won the Craven on Twice Over