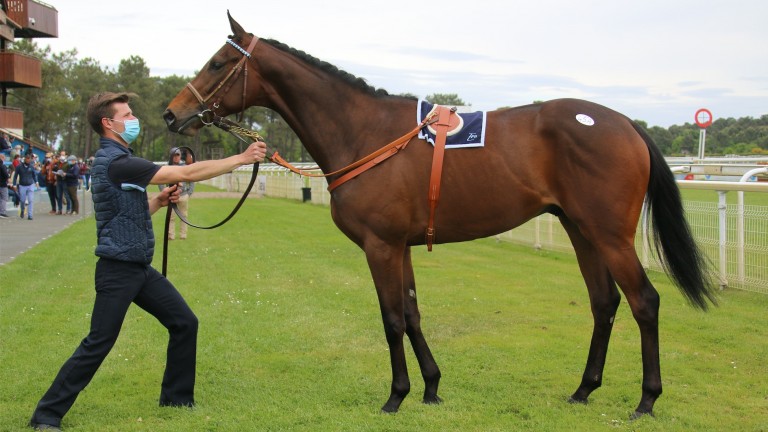 While the Osarus Breeze-Up Sale returned to its traditional location at La Teste after a year inhabiting cyberspace, it was a change of venue that did the trick for the top lot, a €200,000 colt consigned by Philip Prevost-Baratte.

The son of Wootton Bassett (lot 45A) was the subject of a protracted three-way battle and at the last it was Nicolas Bertran de Balanda who came out on top for the most expensive Flat-bred horse ever sold by the company.

The colt is out of the winning Excelebration mare Ettu, whose dam was a full-sister to Jersey Stakes runner-up Il Warrd, though Bertran de Balanda admitted it was the horse himself and his sire that had swayed him.

"The fact he's by Wootton Bassett is hardly just a detail," he said. "He's a wonderful stallion who really improves his stock, and this is a beautiful-looking colt. He vetted well and did a good breeze, while I saw him work before the sale. He looks a good horse to me and I hope I'm right." 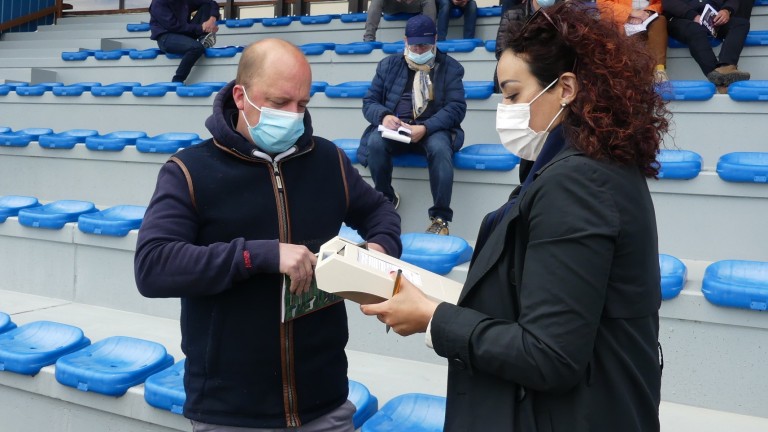 A former trainer most famous for handling dual Grande Course de Haies winner Gemix, Bertran de Balanda has made a name for himself as an agent in the jumping sphere, though he has become more active with Flat stock and sourced the Grade 1 winner Magic Attitude for US-based Roy and Gretchen Jackson.

Plans for the new purchase remain to be decided by unnamed clients, but Bertran de Balanda added: "He was consigned by a really good team, who are very professional and we're always very happy to buy from them."

Prevost-Baratte was able to reflect on a successful decision not to follow Arqana's Breeze-Up Sale to Doncaster with the colt, who was bought back by his breeders for €55,000 at that company's Select Yearling Sale last autumn.

"He's done well for the extra time and has become the horse you see today," said Prevost-Baratte. "I didn't really want to take him to Doncaster and so, rather than be just another horse in that sale, we gambled on coming here as the 'best in show'.

"It's especially pleasing to be able to support Osarus and I think it's important to have more than one sales company. The gamble paid off. 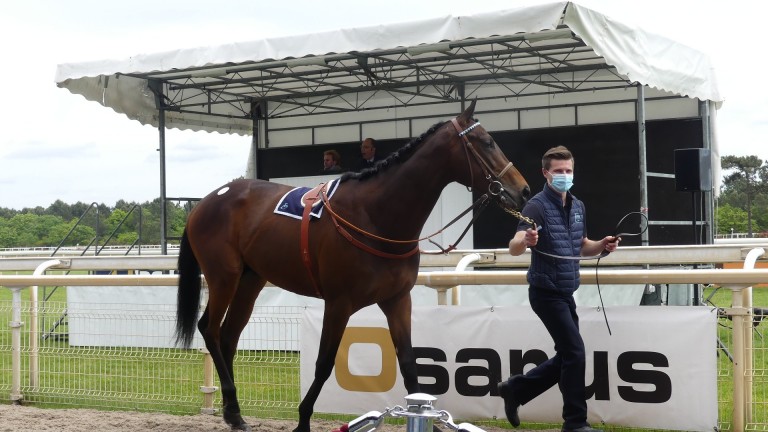 A colt by Wootton Bassett and consigned by Philip Prevost-Baratte, lot 45A made a top price of ?200,000 at the Osarus Breeze-Up sale
Racing Post/Scott Burton

"I think it helped enormously to be clearly the horse everyone wanted in the sale, and that he was the only Wootton Bassett in the breeze-up section. He moves well and did a good canter so he ticked all the boxes, and fortunately there were several buyers looking for quality."

The second highest lot was a son of Kodiac - already named Mr Puzzle - who will be heading to Chantilly-based trainer Elias Mikhalides after Anne-Sophie Yoh-Benet signed at €95,000.

Consigned by Ecurie de la Dentelle, the colt (lot 41A)is out of an unraced sister to Sageburg and thus hails from the Lagardere family of Sagamix and blue hen Shastye.

"He's very well put together and very strong," said Yoh-Benet. "He might not be all that precocious and will be one for the second half of the year.

"But he has some size about him, with good bone and a good frame. He has been well brought along and the team at Dentelle have done great work with him so I'm happy to get him."

Agent Marc-Antoine Berghgracht went to €42,000 early in the session to secure a son of the Queen's French-based freshman stallion Recorder, consigned by Yann Creff (lot 16).

Sitting next to Frederic Rossi, Berghgracht was tapping into a source beloved of the trainer's family, who bred the second dam. 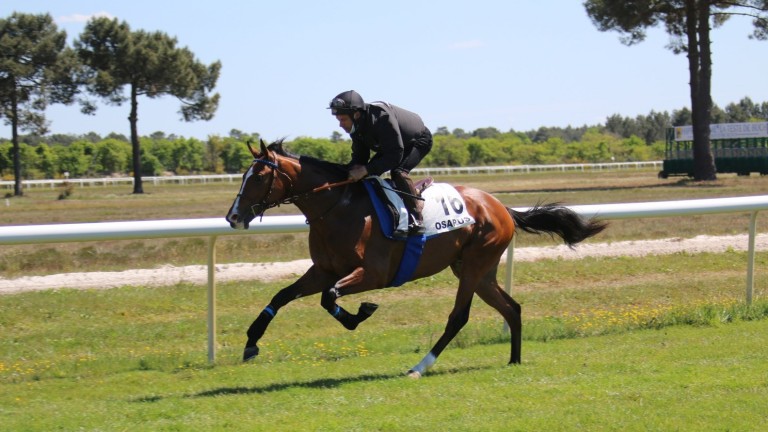 A colt by freshman sire Recorder cantering at La Teste before fetching ?42,000 at the Osarus Breeze-Up sale
Osarus

"He's just a nice horse who did a good canter," said Berghgracht. "The Rossi family knows the pedigree very well and bred Femme De Fer, who was a good mare. We had found out plenty about him beforehand and were not looking for an especially precocious horse. He looks like he'll be one to run in September or October."

Recorder's first crop are just beginning to appear now and Berghgracht will have been watching keenly as one of his purchases by the sire, Record The Shaw, ran fourth on his debut at Chantilly later in the afternoon.

Berghgracht struck at €35,000 for a filly out of an unraced Dynaformer mare, also part of the Creff draft (lot 36) 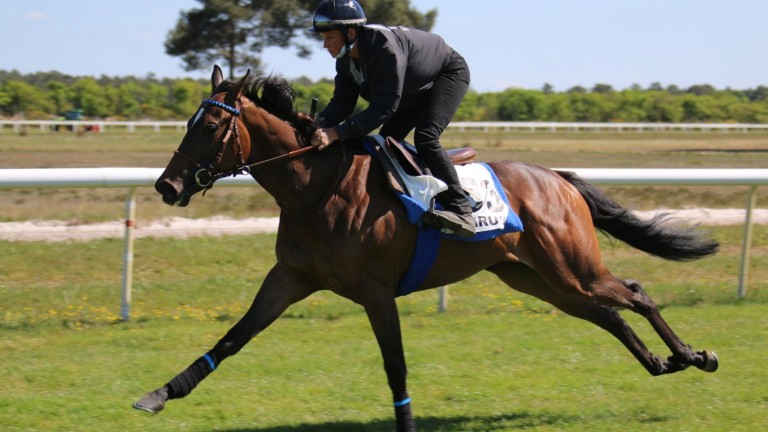 And the agent/trainer combination of Gregory Vayre and Damien de Watrigant gave €31,000 for another daughter of Territories out of an unraced sister to Phoenix Tower, and another presented by Creff (lot 53)

A reduced catalogue of 56 breeze-up lots was augmented by a small horses-in-training section and the like-for-like comparison with 2019 saw a slight rise in the clearance rate, from 63.5 per cent to 67.8.

The median and average price slipped back slightly and there can be no doubt that the top lot helped out a turnover of €792,500 for 56 lots offered, compared to €1,015,000 across a catalogue of 74 two years ago.

Osarus managing director Emmanuel Viaud was pleased with the outcome against a backdrop of continuing difficulty caused by the pandemic.

"At the beginning of the year I was looking at 25 horses signed up and we were wondering if we could hold the sale, but things picked up and I'm pleased," said Viaud.

"Obviously €200,000 is a great top price and we’ve never topped that at La Teste, and that includes the Yearling Sale. But the main thing was the feeling among a lot of consignors and buyers that it was important to be back in La Teste after a difficult year in 2020. 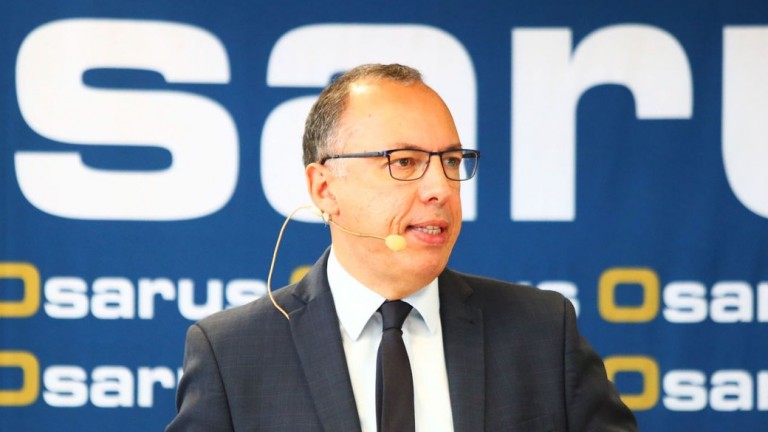 "We got the sale on and have had satisfactory results and that gives us impetus going forward."

Viaud has worked at breeze-ups across the anglophone world and believes there has been less of a reliance on the clock this week.

Viaud said: "What I find interesting is the top lot came from Philip Prevost-Baratte, who is not a man who likes his horses to breeze fast times, and the colt made €200,000 after just cantering and without his rider really asking him for a lot."

FIRST PUBLISHED 7:19PM, MAY 4 2021
I think it helped enormously to be clearly the horse everyone wanted in the sale and that he was the only Wootton Bassett in the breeze-up section