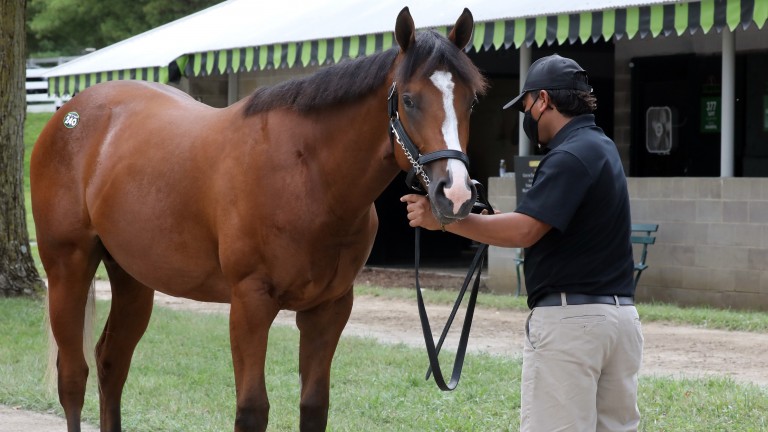 The War Front colt out of Lady Eli at the Keeneland September Yearling Sale
Keeneland photo/Z
1 of 1
By Michele MacDonald 12:59PM, SEP 15 2020

With only a sprinkling of people inside the pavilion and an eerie quiet prevailing compared to Keeneland September sale sessions of recent years, the blazed-face colt by international sire War Front who is the first foal out of champion mare Lady Eli was led out of the ring unsold on a final bid of $385,000.

This deflating moment with one of the most intriguing September yearlings by pedigree unfolded soon after the final session of Book 1 began on Monday, illustrating how the crucial creme de la creme segment of the sale fell flat for many top breeders in this season marred by coronavirus.

As John Sikura of Hill ‘n’ Dale Farms, breeder of the War Front colt, observed, the market has become “very narrow - a lot narrower than it has been” in the wake of global economic turmoil spawned by the
virus.

“That’s the reality," said Sikura. "I think everyone in every line of work has been affected, and now it’s our turn to be affected. Buyers will say the market is strong, which is right, but only strong for about
ten horses in a 220-horse session. That’s a lot of stud fees for a lot of mares, and a lot of horses that don’t get sold.”

In Monday’s session, similar to the results for Sunday’s opening day, less than half the yearlings catalogued, 44.6 per cent, were reported sold. However, Keeneland later adjusted the Sunday figures to include seven yearlings sold after the session ended, upping those sold that day to 116 of 224 catalogued, or 51.8 per cent.

“You do the best you can; when there is no Arab money and a lot of people are bidding on the internet, there’s a disconnect,” Sikura said of the dearth of sale pavilion vitality while referring to the lack of buying by Godolphin and a major cutback in purchases by Shadwell. 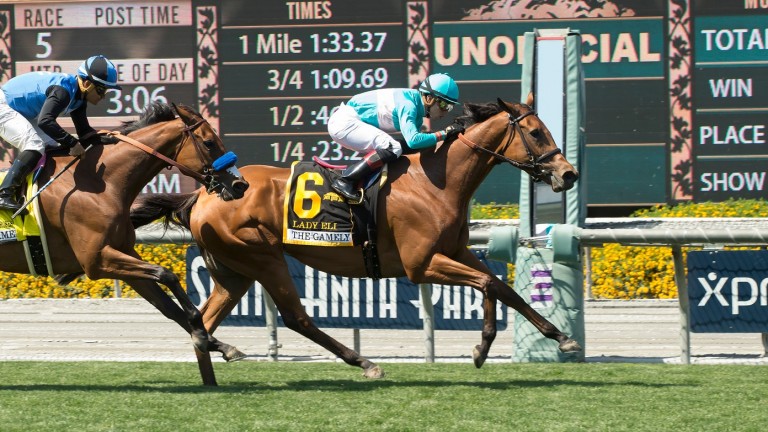 Lady Eli: the five-time Grade 1 winner is in foal to Galileo
Benoit Photo

“Both sales companies [Fasig-Tipton and Keeneland] have done yeoman’s jobs; they’ve done everything they can, but you just can’t overcome [the circumstances]. In Book 1 at Keeneland, when you have 25 people in the arena, it’s hard [to sell].

“When you have a nice horse, you walk up there naked and you have to protect yourself to a degree. If you don’t get half value and there’s nobody there [to bid], you have to come to Plan B and believe in your horse. It’s an opportunity going forward.

“The pendulum shifts. For a long time, horses have made a lot of money - horses you’d really like and stretch and stretch for and still get outbid for in the end. This is one of those aberrant years where,
hopefully, customers get great value, and I hope the pinhookers and others see an opportunity to jump into the marketplace.

"There are always opportunities and you have to have a long-term view and not get too reactive to one week in 20 years.".

Sikura said he could possibly form a partnership to race the War Front colt, who he described as a “lovely fast horse, medium-sized. He’s well raised, a beautiful horse, sound, a great mover.

“We’ll leave everything open. I always believe when something gets in your way, it creates new opportunities. Don’t overreact to the obstacle of the moment, think of a different approach."

Sikura also confirmed that Lady Eli, a daughter of Divine Park who won Grade 1 races at two, three, four and five with the last two seasons following her recovery from laminitis, is currently in Ireland, where she is in foal to Galileo. She did not produce a foal this year.

Acquired by Hill ‘n’ Dale for $4.2 million at Keeneland in 2018, Lady Eli will likely stay in Ireland and be covered by another European stallion in 2021. Sikura's hopes for the future are simply “to have nice foals from her and sell them well.”

FIRST PUBLISHED 12:59PM, SEP 15 2020
We’ll leave everything open. I always believe when something gets in your way, it creates new opportunities