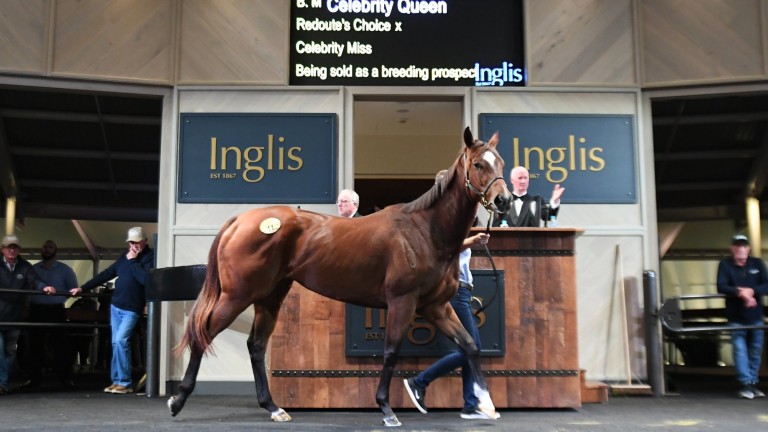 Celebrity Queen: the Group 1 winner sold to Tom Magnier for A$2.5 million at the Inglis Chairman?s Sale
Inglis
1 of 1
By Tim Rowe of ANZ Bloodstock News UPDATED 3:31PM, MAY 7 2021

Coolmore has continued its extraordinary spending spree with a view of mirroring a strategy employed to support unbeaten US Triple Crown champion Justify on another high-profile shuttler, European star sire Wootton Bassett.

Tom Magnier, the principal of Coolmore’s Australian arm, signed for three of the seven million-dollar mares sold at the Inglis Chairman’s Sale, billed as a night of nights, with Group 1 winners Celebrity Queen (A$2.5 million), El Dorado Dreaming (A$1.35m) and Savanna Amour (A$1.25m), who is in foal to Fastnet Rock, all destined for the stallion in the new season. That trio cost the equivalent of around £2.8m/€3.2m).

In Her Time, one of the other star attractions at the select Chairman’s sale, sold to Yulong for A$2.2m and another high-class sprinter, Pippie, was bought by Cressfield Stud for $1.8m.

Widden Stud went to A$1.2m for Meuse, who is in foal to Dundeel, while Ridgmont Farm, Boutique Thoroughbreds and agent Jim Clarke secured Group 3 winner Shoko, who is in foal to I Am Invincible for $1m during what was an extraordinary three hours of trade at Riverside Stables.

Magnier on Friday night reiterated Coolmore’s belief that the Australian thoroughbred industry will arguably remain the envy of world racing.

“Where we see the Australian market, we feel it is extraordinary at the moment, you see what is happening at the yearling sales and we are trying to bring the best stallions in the world down here, with Justify, American Pharoah, etc,” said Magnier. 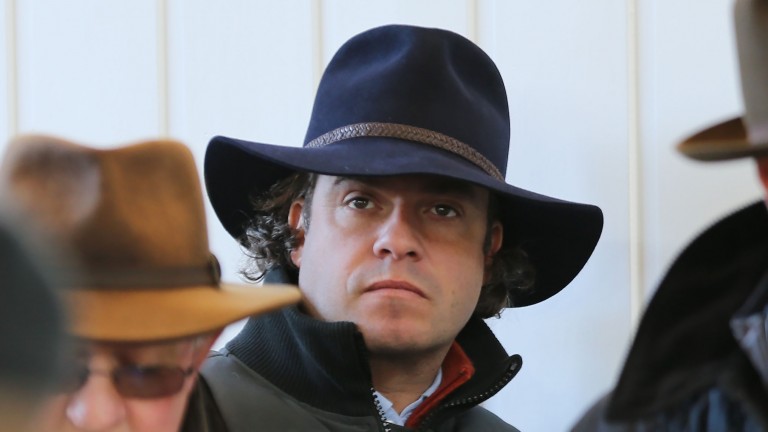 Tom Magnier: "We're going to go out and buy the best mares for him?
Laura Green

“We've gone along and acquired Wootton Bassett, and we think he is a stallion that is really going to suit Australia.

“We are taking the same approach we did to Justify. We're going to go out and buy the best mares for him.”

A winner of the Oakleigh Plate in February, Celebrity Queen was offered as a breeding prospect only by owner Bob Peters through the Holbrook Thoroughbreds draft.

Celebrity Queen was also a Group 3 winner and a Winterbottom Stakes placegetter in a 14-race career that yielded seven wins and more than A$825,000 in prize-money.

The rising five-year-old mare is a daughter of Peters’ Listed winner Celebrity Miss, herself a sister to stakes-placed Rafferty, a three-quarter sister to stakes winner Dreamaway and a half-sister to Karrakatta Plate winner Confront.

Further back in the family, cultivated by leading Western Australian breeder Peters over many years, is Group 1 winner Miss Margaret and this season’s Listed winner Stageman. Her first four dams were all successful at stakes level.

Celebrity Queen’s price tag exceeded Peters’ expectations, who valued his mare at A$2m, but he believes it is money well spent.

“You could just about say that if you were writing the history of breeding in Australia, you could use her as a prime example - you look at her page and there’s her sire Redoute’s Choice, which also gives you Danehill, there’s Sir Tristram, Marscay, More Than Ready, etc, all of them champions, just as she was,” Peters said from Perth.

“There’s a Group 1 winner on every level of the pedigree. It’s just outstanding and it’s a great result.

“Inglis has done a great job with the promotion of her, which I’m grateful for, and, while I’m not at the sale, I’m aware it’s a great night there tonight.”

Bidding on the most expensive of Coolmore’s haul, the sale-topping Celebrity Queen, opened at A$800,000 before pushing through the million-dollar mark and, in typical Magnier fashion he did not make his move before required.

Celebrity Queen was soon in Coolmore’s possession, with the A$2.5m price tag the highest-priced mare sold through the Inglis Chairman’s Sale.

Magnier said: “She was a quality mare who is a lovely physical. Obviously, Redoute's Choice is a very good broodmare sire.

“We are looking for mares for Wootton Bassett now and she's a standout. We thought she was a queen. We are just very lucky to have her.

“Bob Peters is an unbelievable breeder, and anything that he is associated with is always of a very high calibre and we were just delighted to get her.”

In recent years, Coolmore has acquired the likes of Sunlight (A$4.2m), Global Glamour (A$1.55m), Maastricht (A$2.25m) and Srikandi (A$2m), all elite mares, to back their young sire Justify, whose first southern hemisphere-bred weanlings hit the market at Riverside Stables on Thursday, selling to $300,000.

Maastricht was the previous highest-priced mare sold at a Chairman’s Sale.

Wootton Bassett, who was purchased by Coolmore in a sensational play last year, will stand his first southern hemisphere season at A$71,500 after transferring from France to Ireland in time for the 2021 northern hemisphere breeding season, where he stands for €100,000.

Coolmore has already reported that the 'house full' sign has been placed on the stallion’s southern hemisphere book.

FIRST PUBLISHED 3:22PM, MAY 7 2021
We are looking for mares for Wootton Bassett now and she's a standout. We thought she was a queen. We are just very lucky to have her