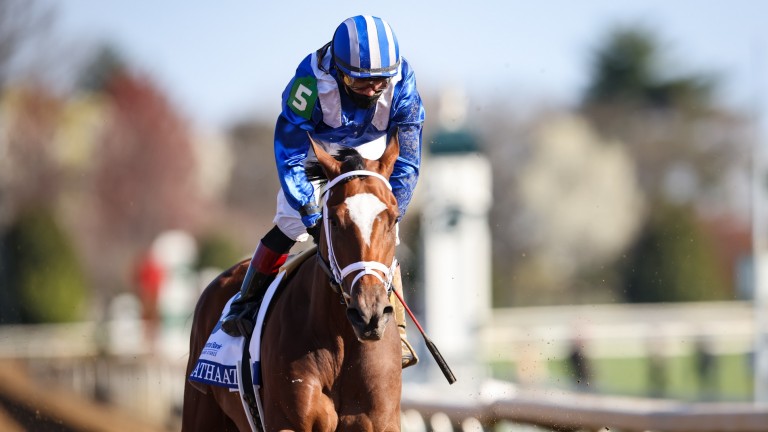 Malathaat: provided Shadwell with their second top-level success of the weekend in the Ashland Stakes
wendy wooley
1 of 1
By Kitty Trice UPDATED 4:59PM, APR 4 2021

Shadwell continued to demonstrate its world-wide power with a Grade 1 double over the weekend, with strikes from Malathaat and Malmoos in America and South Africa respectively providing further fine tributes to Sheikh Hamdan Al Maktoum, the founder and owner of the operation who died at the age of 75 last month.

Malmoos, a son of Captain Al and the winner of seven of his eight starts, was making history when completing country’s Triple Crown with a smooth victory in the Group 1 SA Derby at Turffontein.

Bred by Varsfontein Stud, the three-year-old has risen right to the top of the tree in the past few months and was joining South African legends in Horse Chestnut and Louis The King in completing the task.

Out of Justthewayyouare - a stakes-winning daughter of Sheikh Mohammed's Grand Prix de Paris and Prix Noallies winner Fort Wood - Malmoos is a brother to South African Grade 3 scorer Captain Splendid. His dam is herself a half-sister to Grade 2 winner Master Of My Fate and out of Triple Tiara heroine Promisefrommyheart.

That’s some way to complete the third leg of the South African Triple Crown!

MALMOOS shows a devastating turn of foot to take the Gr.1 SA Derby at Turffontein.

Malathaat then completed the top-level double when maintaining her unbeaten record in the Ashland Stakes at Keeneland, starting off her seasonable reappearance after the traditional ten days of mourning for Sheikh Hamdan had ended the night before.

Bred by Stonestreet Thoroughbred Holdings, the daughter of Curlin and Frizette Stakes heroine Dreaming Of Julia was a $1,050,000 purchase from Denali Stud when selling at the Keeneland September Yearling Sales in 2019.

On the decision to run the Todd Pletcher-trained Malathaat in the Grade 1 - which all but guaranteed a spot for next month's Kentucky Oaks - Shadwell's general manager Rick Nichols told Bloodhorse: "We angled her toward the Gulfstream Park Oaks, but when Sheikh Maktoum passed years ago, Sheikh Hamdan called me and said, 'please don't run any of our horses during a ten-day mourning period.' So, I asked Todd Pletcher, 'what about the Ashland?' He said, 'that would be great'. The ten days of mourning ended last night."

Nichols continued: "I can’t put it into words. I am sure (Sheikh Hamdan) is up there with a big smile on his face looking down on us. We really needed this.

"I think (Malathaat) might be pretty special. We will see if we can get in the (Kentucky) Oaks and see what we can get done."

Malathaat, who was unbeaten in three starts at two, is the third foal out of Dreaming Of Julia, herself a relation to dual Grade 3 dirt winner Dream Pauline. The pair are out of Prioress and Test Stakes heroine Dream Rush who made $3,300,000 when selling at the Fasig-Tipton November Sale in 2007.

Dual Royal Ascot runner-up Kimari rewarded her supporters who backed her into a short price as she made the breakthrough in elite level with a win in Keeneland’s Madison Stakes. Second in last year’s Commonwealth Cup, the Wesley Ward-trained filly came out on top in a tight finish, beating the dead-heating pair Estilo Talentoso and Bell’s The One by three-quarters of a length.

Kimari, who becomes the third individual elite-level winner for Munnings has now won six of her ten starts, including five stakes successes. Bred in Kentucky by China Horse Club International out of Cozze Up Lady, Kimari was a $152,000 purchase by Eaton Sales from Bluewater Sales' consignment to The July Sale, Fasig-Tipton's Kentucky yearling sale. Munnings stands at Ashford Stud for a fee of $40,000.

Frankel’s brother Noble Mission sired his third individual stakes winner when Jouster got the better of her five rivals in the Appalachian Stakes on the Keeneland turf. Scoring for the third time in six starts, the Todd Pletcher-trained favourite beat Gift List by a length and a half. Plum Ali was another half length behind in third. Jouster was a $360,000 purchase from the 2019 Fasig-Tipton Saratoga Select Yearling Sale from the Lane's End consignment. Former Lane’s End stallion Noble Mission now stands at Shizunai Stallion Station in Japan.