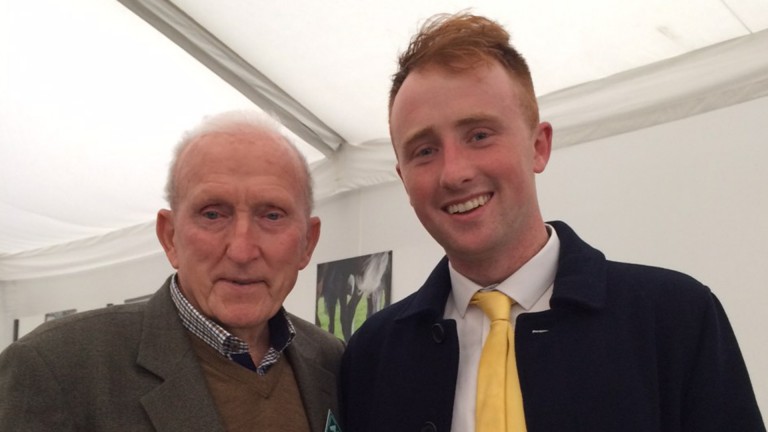 Michael Conaghan and grandson Micheal were in seventh heaven at Cheltenham
1 of 1
By Martin Stevens UPDATED 3:20AM, MAR 15 2019

In a competitive field for most popular winner on an emotional day of racing at Cheltenham on Thursday, in which Frodon's jockey Bryony Frost and Paisley Park's owner Andrew Gemmell would be hot favourites, the bloodstock community can contribute a lively outsider.

Micheál Conaghan, 23, has numerous well-wishers in the industry thanks to a positive disposition and a long CV, spending spells at Bansha House Stud, Ballyvolane Stud, Camas Park Stud, Egmont Stud and Yeomanstown, riding between the flags and completing the Irish National Stud course before taking over the reins at his grandfather Michael's Evergreen Stud in County Limerick.

It was at Evergreen Stud that Sun Racing Stayers' Hurdle hero Paisley Park – a son of Oscar out of Presenting Shares, an unraced half-sister to dual Thyestes Chase winner Preists Leap – was born and bred before he was sold to Richard Rohan for €12,500 at the Tattersalls Ireland November National Hunt Foal Sale, later being resold to Gerry Hogan for €60,000 on behalf of present connections at the Goffs Land Rover Sale.

Micheál and his grandfather made the journey to Cheltenham on Thursday with a group of friends to cheer on the seven-year-old, setting off for Bristol Airport at 1am and arriving in town in time to have breakfast before settling in for the day's racing.

Lining the stomach will probably have proved a wise decision as the jubilant Conaghans were set to celebrate in style after welcoming Paisley Park into the winner's enclosure.

“It's just a dream come true,” said a euphoric Micheál Conaghan. “The best day of my life and I think the best day of my grandad's life. It's so important for a small place like ours. This result will keep us going for a long time.

“I'm just so delighted for Emma Lavelle and the owner Mr Gemmell, we're none of us overly big operations which makes it so much more special.”

Presenting Shares, now 20, is unfortunately not in foal after being covered by Malinas last year but plans call for her to visit Milan, like Oscar a son of Sadler's Wells stood under the Coolmore National Hunt banner.

“We thought we'd stick to the same bloodlines,” said Conaghan, “and please God the next one will be half as good as Paisley Park.” 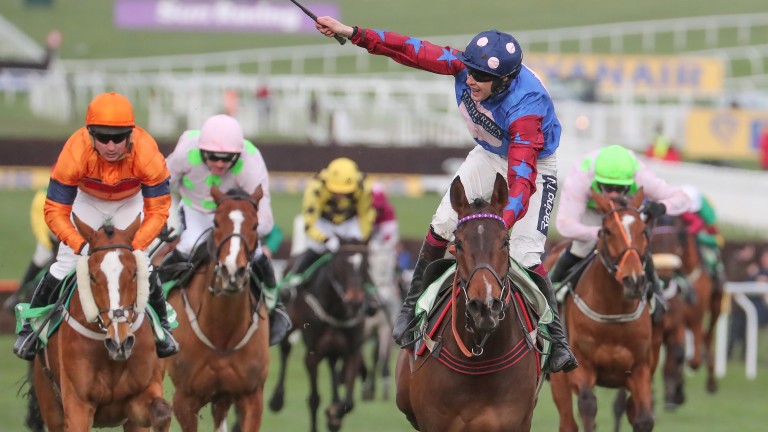 Festival week started off well for the Conaghans after another they bred, Chantry House, made an impressive winning debut in a Warwick bumper on Sunday for new trainer Nicky Henderson and owner JP McManus. He was sold for £295,000 at Cheltenham a week after scoring between the flags at Tattersalls Farm in December.

“I spoke to someone at Nicky's and they said he might just be put away for a while and given time to strengthen as he's a big, raw frame of a horse, as is the case with many from the family,” said Conaghan of the five-year-old Yeats gelding who is a half-brother to the smart chasers Linnel and On The Shannon.

The week could get even better for the breeders, as Evergreen Stud's store sale draft this year will include a Spanish Moon half-sister to Friday's Martin Pipe Conditional Jockeys' Handicap Hurdle hopeful Acapella Bourgeois.

"We've been trying to improve our store drafts and thank God it's all coming together," Conaghan said.

Conaghan was receiving plenty of congratulations from friends and former colleagues in the flesh at Cheltenham and in digital form on social media after the race, but he was keen to share the plaudits.

“I'm just over the moon for my grandad, he's been breeding for 40 years or so now and a day like this makes it all worthwhile,” he said. “There's three generations of us mucking in as well, as my dad's at home looking after the farm today.

“There's been a lot of hard work to get here but I'm also so grateful to all the advice and direction I've been given from people I've worked for down the years.”

FIRST PUBLISHED 5:59PM, MAR 14 2019
I'm just over the moon for my grandad, he's been breeding for 40 years or so now and a day like this makes it all worthwhile

Ruby Walsh: 'Min was a wonderful horse who was part of a wonderful era' Bookmakers fear Envoi Allen for Gold Cup after news of Monkfish injury 'He clearly loves all the fuss' - meet and greet the friendly Ouzbeck at Newbury 'He seems as good as ever' - Lavelle reveals surprise option for Paisley Park Who will come out on top in the battle of the progressive staying hurdlers?