Gordon Elliott and O'Ryan emerge on top for €185,000 son of Network at Goffs

Aisling Crowe reports on day one of the Land Rover Sale 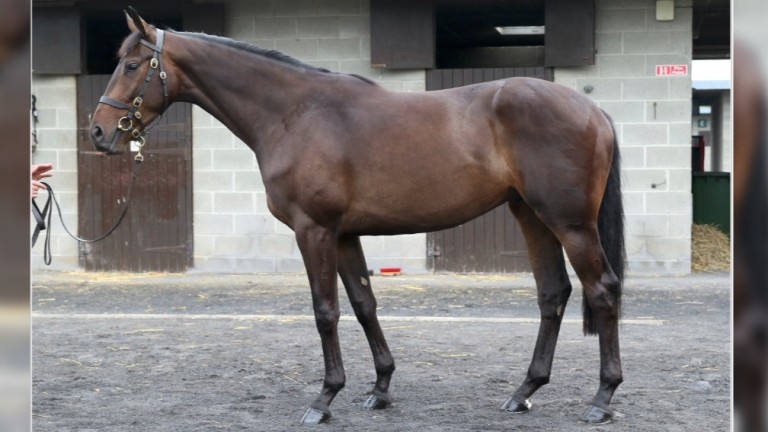 Top lot: the Network gelding out of Tornade D'Ainay from Norman Williamson's Oak Tree Farm
Goffs
1 of 1
UPDATED 9:42AM, AUG 13 2020

Following uncertainty, doubt and setback over the last few months it was with an enormous collective sigh of relief that the Goffs Land Rover Sale finally got under way yesterday, two months later than its traditional June slot due to Covid-19 related delays.

In these much changed days, when terms like social distancing and hand hygiene have become part of our everyday language, the team at Goffs deserves an enormous amount of credit for the impressive protocols and measures implemented to ensure the safest environment possible for buyers, sellers and staff.

Despite the unusual circumstances, it was very much business as usual in the ring with trade holding up well, and the best lots - as always - provoking a flurry of bids, from the traditional places and on the phone, as well as the outside bidding in the parade ring and the online system.

View results from day one of the Land Rover Sale

Aidan 'Mouse' O'Ryan and Gordon Elliott were busy throughout the day, going into battle for many of the choice lots right to the very end of trading, and they prevailed in a battle with Margaret O’Toole from their favoured spot out in the parade ring to secure the day’s most expensive horse, a gorgeous son of Network from Norman Williamson’s Oak Tree Farm.

Storm Of Light shares his sire with the superb Sprinter Sacre and there was more than a passing resemblance to the brilliant two-mile chaser. Looks alone weren’t all he had to recommend him, as his pedigree is second to none. He is out of Tornade D’Ainay, a Robin Des Champs half-sister to Grade 1 Prix Ferdinand Dufaure Chase winner Fleur D’Ainay and to Crystal D'Ainay trained by Alan King to win the Grade 2 Rendlesham Hurdle and Cleeve Hurdle.

O'Ryan and Elliott also emerged victorious after a protracted fight with Gerry Hogan and a buyer out in the parade ring for Castletown Quarry Stud’s Kalanisi half-brother to last season's Grade 1 Champion Bumper winner Ferny Hollow, going to €135,000 to acquire him.

While the Cheltenham winner races for David and Patricia Thompson's Cheveley Park Stud, who own Elliott's superstar novice hurdler Envoi Allen - who precedes Ferny Hollow on the Champion Bumper roll of honour - the Kalanisi gelding is for a new owner to Elliott's Cullentra House Stables.

"He's an outstanding horse, the pick of the sale and his pedigree speaks for itself," remarked O'Ryan. "We've had plenty of luck with the stallion - the Champion Bumper winner Fayonagh and Malone Road are both by Kalanisi and we just loved this horse."

That pedigree O'Ryan referred to is that of Ken Parkhill’s wonderful Champion Hurdle-winning family of the full-siblings Morley Street and Granville Again. Ferny Hollow is one of five winners so far out of Mirazur, an unraced Good Thyne half-sister to the Grade A Leopardstown Handicap Chase second Hersov and Almira, who was third in a Grade B handicap hurdle at Leopardstown. Their dam is a half-sister to the aforementioned famous siblings.

Williamson has sold two Land Rover Bumper winners and his reputation as a producer of top-class store horses is unparalleled.

Elliott will have two strong candidates for next season’s renewal of the Punchestown race, as he and O’Ryan also purchased the only son of exciting young sire No Risk At All offered for sale on Wednesday and consigned by Williamson’s Oak Tree Farm. Lot 216 was knocked down to the duo for €130,000.

O'Ryan confirmed that he was bought for an existing owner in the yard and added: "He's by a sire that has started off his stud career on fire and is a gorgeous horse, just a really striking individual. He comes from a great farm, Norman produces brilliant horses and hopefully we can get him the keys to a third Land Rover with this fella."

Deja Rouge represented a healthy pinhooking profit for connections as he was bought as a foal at the Osarus Maisons-Laffitte National Hunt Sale for €32,000 in November 2017. The second foal out of the Bonbon Rose mare Roselia Rouge, he is already a half-brother to a winner; his Martaline sibling Red Rain was successful over jumps as a four-year-old.

No Risk At All stands at Haras de Montaigu and was a dual Group 3 winner on the Flat and third in the Prix d'Ispahan. The son of My Risk is a half-brother to Grade 1 chase winner and late sire Nickname, and although his oldest crop is aged just six, he is already the sire of Nicky Henderson and JP McManus' Champion Hurdle winner Epatante and Esprit Du Large, who won the Grade 1 Henry VIII Novices' Chase last season for Evan Williams. 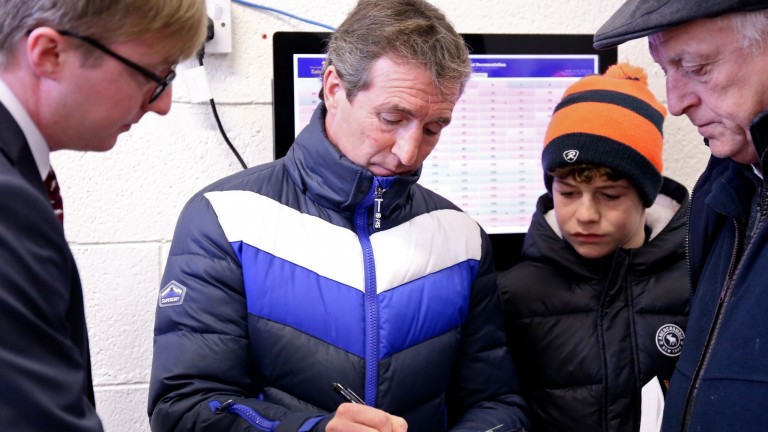 Russell Mac Nabb was at Goffs for one horse and after waiting all day in the muggy heat was determined not to let the Authorized gelding in question slip through his fingers. Although he had to fork out €155,000 - a little more than anticipated - to secure the offering from Brown Island Stables, he was pleased he had succeeded in the mission he was set by Gary Moore and Pat Gallagher.

He quipped: "Gary has a soft spot for the stallion, even with the last-hurdle falls [Goshen, who unseated at the last in the Triumph Hurdle, is by Authorized]. He is for Pat Gallagher and it was a bit more than we thought we'd have to pay, but that's the sales for you. I'm here just for him and he was worth the wait."

The already named Authorised Speed is a half-brother to the Listed hurdle second Speedy Speed out of Tangaspeed, a dual Listed winner on the Flat who has a perfect record with her three runners to date.

Margaret O’Toole was one of the busiest people at Goffs on Wednesday, buying for a number of agents and trainers in their enforced absence. Two of her most high-profile purchases were on behalf of Tom Malone, and she struck very late in the evening for Clifton Farm’s gelding by Buck’s Boum, giving €120,000 for Hezek whose broodmare sire is none other than Martaline.

The family is one of the Wildenstein’s most famous; his dam is a half-sister to Long Distance Hurdle second Special Envoy out of Pawnee Dancer, a daughter of their champion Pawneese, whose victories included the Group 1 King George VI and Queen Elizabeth Stakes. Pawnee Dancer is a half-sister to Poughkeepsie who is the second dam of the record-breaking stayer Stradivarius, and the third dam of Melbourne Cup winner Protectionist.

O’Toole also bought a Flemensfirth gelding with an outstanding page for €90,000 on behalf of Malone from breeders’ Ciara and Michael Carty’s Kilmoney Cottage Stud. The full-brother to Grade 3 Solerina Mares Novice Hurdle winner Minella Melody is out of Cottage Theatre, an unraced King’s Theatre full-sister to dual Grade 1-winning hurdler Glens Melody, and will be trained by Paul Nicholls.

Stone Lodge Stud enjoyed a highly successful opening day of the Land Rover Sale, as the County Down farm sold a son of Soldier Of Fortune who made €100,000 to MV Magnier. The gelding is a half-brother to four winners including the Listed Silver Cup Handicap Chase winner Gold Present, trained by Nicky Henderson. Dam Ouro Preto is a Definite Article half-sister to the Grade 3 Topham Chase winner Rajdhani Express and Shatabdi, winner of the Grade 2 Dovecote Novices' Hurdle.

Magnier also bought the most expensive horse from the first Irish-bred crop of Walk In The Park, going to €90,000 for Knocktartan House Stud's homebred half-brother to El Bandit, who won the Grade 2 Persian War Novices' Hurdle for Paul Nicholls. The family is one that Nicholls has an affinity for as dam Bonnie Parker is an Un Desperado winning half-sister to Woolcombe Folly, who was trained by Nicholls to win the Grade 2 Lightning Novices' Chase.

Magnier said: "He's a lovely horse from a good jumping family and the sire has produced exceptional horses. We're really looking forward to seeing Walk In The Park's first Irish crops on the track over the coming seasons." 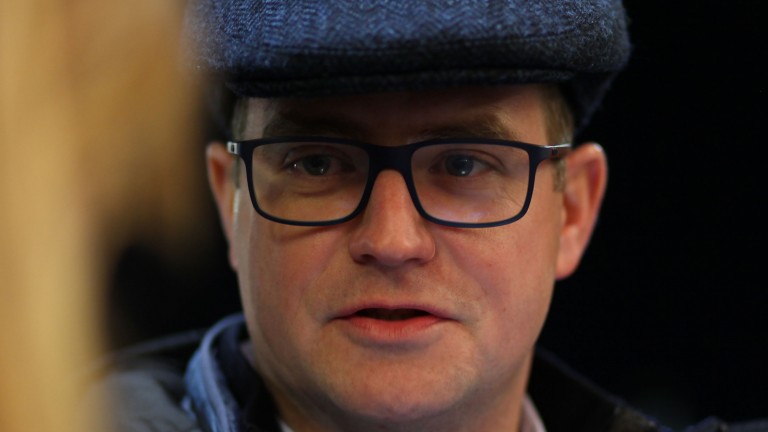 The sire of brilliant jumpers Douvan and Min, Walk In The Park's first Irish bred stores were always likely to record above average prices and with 23 offered on day one of the sale, there was no sense of supply outstripping demand, with 19 selling for an average of €43,684.

In an extraordinary year, trade on the first of two days of the delayed Land Rover Sale was remarkably robust considering the Covid-19 cloud under which we are all living.

FIRST PUBLISHED 9:08PM, AUG 12 2020
Norman [Williamson] produces brilliant horses and hopefully we can get him the keys to a third Land Rover with this fella