'Only one question remained, could we afford Logician? We just about could'

Today Martin assesses the purchase of St Leger hero Logician as a predominantly jumps-oriented sire for British breeders and speaks to Bryan Mayoh for the background – subscribers can get more great insight every Monday to Friday.

It’s such an unexpected yet pleasant surprise that a British National Hunt operation has managed to buy Logician for stallion duty that when I told a friend in the industry on Tuesday, they literally couldn’t believe their ears and thought I had said Magician.

When I corrected them by saying that it was in fact the Classic-winning son of Frankel who was heading straight to Shade Oak Stud, and not the former Irish 2,000 Guineas winner by Galileo being transferred from elsewhere, they expressed genuine astonishment that such a high-class prospect had been secured.

That shock was not a reflection on Shade Oak Stud itself, but rather British National Hunt breeding, which has plenty to shout about – not least unbeaten Champion Hurdle heroine Honeysuckle, a product of Glanvilles Stud in Dorset – but is generally overshadowed by the much larger Irish industry.

In Ireland, it is not uncommon to see top-class middle-distance runners and stayers retire directly to the National Hunt ranks (some might say it happens rather too frequently, as many of those horses deserved a chance of becoming Flat stallions, but that’s an argument for another day).

Elsewhere in Ireland there are also Galileo Chrome, Gamut, Hillstar, My Dream Boat, Old Persian and Way To Paris in this category. You can throw in Poet’s Word, too – an outstanding performer who covered one relatively small book of Flat mares before he was snapped up by Boardsmill Stud.

The comparative list of top-level winners who were retired to become National Hunt stallions in Britain is much shorter. Leading the way are Jack Hobbs and Schiaparelli at Overbury Stud thanks to Sheikh Mohammed’s support of the farm, which also saw dual Gold Cup victor Kayf Tara establish himself a major force there. There are also Flag Of Honour, Harbour Law and Pether's Moon at other operations in England.

All this is not to say that Group 1 winners who immediately become National Hunts stallions are better by default, of course, and there are countless other Group winners and/or sires switched from Flat roles worthy of jumps breeders’ attention on both sides of the Irish Sea.

But the point remains that Shade Oak Stud’s acquisition of Logician, a son of dual world champion and leading British and Irish sire Frankel who won the St Leger by two and a quarter lengths in an unbeaten three-year-old campaign, is a significant coup. So how did they do it? 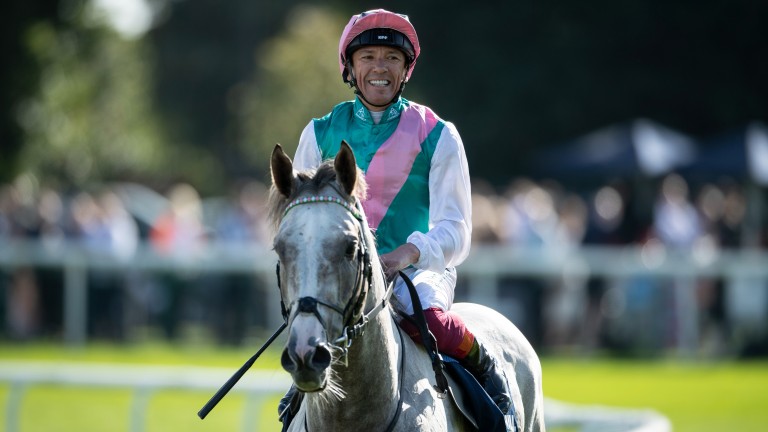 Logician: new acquisition for Shade Oak Stud, who hope British breeders will get right behind him
Edward Whitaker (racingpost.com/photos)

Bryan Mayoh, the joint-breeder of Cheltenham Gold Cup winner Sizing John and one of the shareholders in Logician, tells Good Morning Bloodstock that he had had the horse earmarked for a long time.

He says: “Over the years I’ve undertaken detailed analyses of what factors indicate whether a newly-retired horse will become a successful National Hunt stallion – these taught me what I might have guessed in the first place!

“Firstly, the horse must be a good racehorse, with a Timeform rating of at least 120 and ideally 125+. Secondly, he must possess the combination of high cruising speed and stamina that is essential to the best middle-distance horses, racing over ten to 14 furlongs.

"Thirdly, he must ideally be by a stallion rated in the top two per cent of sires ranked on the RPRs of their offspring – and certainly in the top ten per cent. In past years such horses would have been in great demand as Flat stallions; today middle-distance horses rarely get the chance.

“The trick is to identify these animals before other people do and then hope to buy them.”

The Shade Oak Stud team have followed many others who fitted the bill over the years, but weren’t always successful.

“For several years we’ve tracked horses with these characteristics, waiting to act when injury or illness prevented them from continuing to race,” continues Mayoh.

“We tried, and failed, to buy Crystal Ocean; and I first identified Logician as a target when Phillipa Cooper told me how impressed she was by him when he won the Great Voltigeur just before Crystal Ocean took the Juddmonte International. I was bowled over by his looks when I saw him before the St Leger – and even more by his performance when he won it.

“By Frankel, who surpassed Sea-Bird as the supreme racehorse of my lifetime and is now a great sire, 126p rated by Timeform and outstanding at 12 to 14 furlongs, while big, good-looking, a great mover and with a fantastic temperament, only one question remained. Could we afford him?

“I’m delighted that we just about could; I hope British breeders will be too.”

Spotted an interesting stallion stat or feat of breeding? Share it with other Good Morning Bloodstock readers by emailing gmb@racingpost.com

t’s the second session of the Goffs August Sale, with National Hunt stores and yearlings set to go under the hammer. The Jack Hobbs yearling half-brother to Thyme Hill (lot 384) will surely be popular.

For what it’s worth, Good Morning Bloodstock’s pick of three cheapie horses in training to follow in yesterday’s session generated some interesting results.

The unraced Muhaarar gelding Burma Sky was knocked down to an entity calling itself ‘Barma Sky’ for £2,000 – it’ll be intriguing to see where he turns up – while the unraced Fastnet Rock gelding Torbruk looks like he is heading back to Richard Fahey after being knocked down to Fahey's assistant trainer Robin O’Ryan for £4,000. Cedar Rapids, the nicely bred son of Australia who has proved a bit of a handful in his five starts, was sold to Howson and Houldsworth Bloodstock for £6,000. View the catalogue for today’s sale and results from yesterday’s session.

Andrew Scutts has listed some of the exceptionally well bred horses set to make their debut in Britain and Ireland today in the Racing Post’s regular Marking Your Card feature. If I had to pick just one, I’ll be hoping for a big run from Soul Stopper at Sandown (6.27). The Mildmay Bloodstock-bred colt is trained by the in-form Andrew Balding for Sheikh Mohammed Obaid, who also owned his outstanding sire Postponed. Two of his closely related half-siblings, Perfect Tribute and Al Kherb, scored on debut. Read Marking Your Card.

A new bloodstock industry code of practice has been launched, stating baldly that the practice of giving or receiving ‘luck money’ is forbidden. “Participants should be clear that there can generally be no legitimate reason for an agent of the purchaser to be rewarded in any way by the vendor and parties related to the vendor,” it states. “This is whether or not the payments are described as 'luck money'."  Read the story.

Click here to sign up to our weekly Asia Bloodstock News publication to receive news and features from all things racing and bloodstock across Mainland China, Japan, Hong Kong, Singapore and beyond. This week's edition sees startling revelations from Hong Kong's 'Magic Man', Joao Moreira.  Click here to read.

Catch up with Martin's other articles this week:

Tiger Roll and Sceptical are very much the exceptions, not the rule

Covid-19 and the boost it's given bloodstock sales

Golden Horn has underwhelmed but his progeny still appeals

FIRST PUBLISHED 11:30AM, AUG 5 2021
Shade Oak Stud’s acquisition of Logician is a significant coup. So how did they do it?