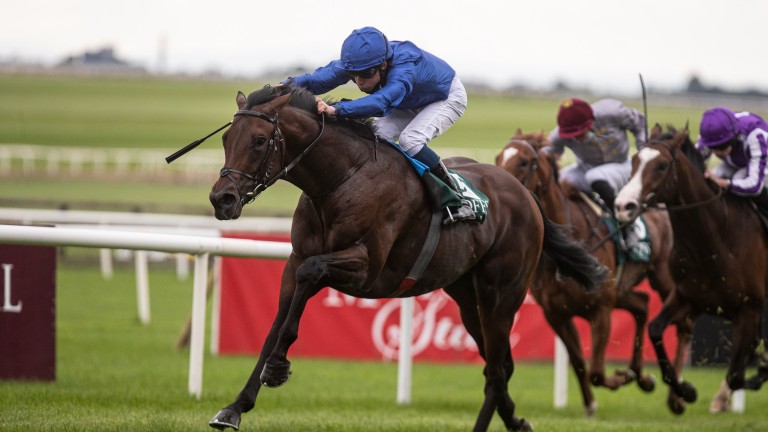 Native Trail: 18th individual top-flight winner for Oasis Dream and out of a full-sister to African Rose and Helleborine
Patrick McCann
1 of 1
By Kitty Trice UPDATED 9:57AM, SEP 13 2021

The old saying that form is temporary and class is permanent could easily apply to a number of old-timers in the stallion ranks, but particularly to the venerable Oasis Dream, whose Native Trail blitzed his way to a sparkling success in the Goffs Vincent O'Brien National Stakes at the Curragh on Sunday.

A third winner of the race in four years for Charlie Appleby and Godolphin following on from Quorto and Pinatubo, the imposing colt certainly looks to hold strong claims at this stage to be Europe's leading two-year-old - he was cut into general 4-1 favouritism for the Qipco 2,000 Guineas - and has a pedigree to match his presence and talent.

Bred by Le Haras d'Haspel, the colt is the second foal out of the unraced Juddmonte-bred Needleleaf, an Observatory full-sister to Haydock Sprint Cup winner and French juvenile Group 3 scorer Helleborine, the dam of Coventry winner and now Coolmore sire Calyx.

Needleleaf, out of a stakes-placed Quest For Fame half-sister to Dewhurst winner Distant Music, was sold to MAB Agency for 60,000gns at the 2015 Tattersalls December Mare Sale. She produced a Siyouni filly this term and was then covered by Cracksman.

Native Trail was a €50,000 purchase by Sam Sangster from Arqana's December Sale, before reselling to Mags O'Toole and Oak Tree Farm for 67,000gns from Tattersalls Book 1, when consigned by Kildaragh Stud.

He was the subject of a sizeable return for Oak Tree Farm when selling to Godolphin for 210,000gns at this year's Tattersalls Craven Breeze-Up Sale. The windfall continued as the colt also collected Tattersalls' £125,000 Craven Group 1 Bonus - a £100,000 prize to Godolphin and £25,000 to the Oak Tree's Norman Williamson. 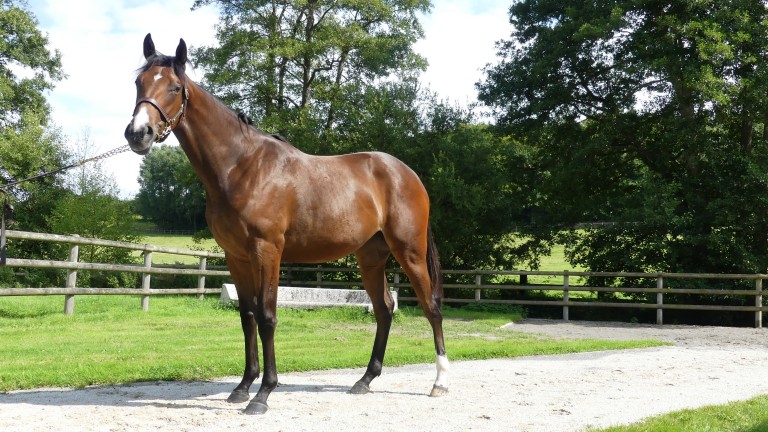 Haras d'Haspel's Kingman half-sister to Native Trail pictured on the farm before being sold for €950,000 at Arqana
Racing Post/Scott Burton

His three and a half-length success over the odds-on Point Lonsdale provided yet another update for his half-sister's page, with the daughter of Kingman selling to Godolphin for €950,000 at Arqana's August Sale.

Oasis Dream, the source of top-level talent such as Midday, Power, Muhaarar, Pretty Pollyanna and Goldream, was also present in the bloodlines of Irish St Leger hero Sonnyboyliston, who provided Power with another top-level success following on from Helvic Dream and Laws Of Indices in Europe this year.

It was a day for well-related youngsters to make their mark in the Group 1s at the Curragh, as Discoveries paid fitting tribute to the late Mastercraftsman when pouncing in the Moyglare Stud Stakes.

The Niarchos family-bred filly is the third individual top-level winner for the remarkable Alpha Lupi, a daughter of Rahy and dual French Classic heroine East Of The Moon, herself out of the breed-shaping Miesque, and a full- or half-sister to the great Alpha Centauri and last year's Coronation Stakes winner Alpine Star.

Alpha Lupi has a yearling full-brother to Discoveries and a foal colt by 2,000 Guineas and Vertem Fururity Stakes winner Magna Grecia. She was covered by Sea The Stars this year.

FIRST PUBLISHED 5:38PM, SEP 12 2021
Needleleaf, out of a stakes-placed Quest For Fame half-sister to Dewhurst Stakes winner Distant Music, was sold to MAB Agency for 60,000gns