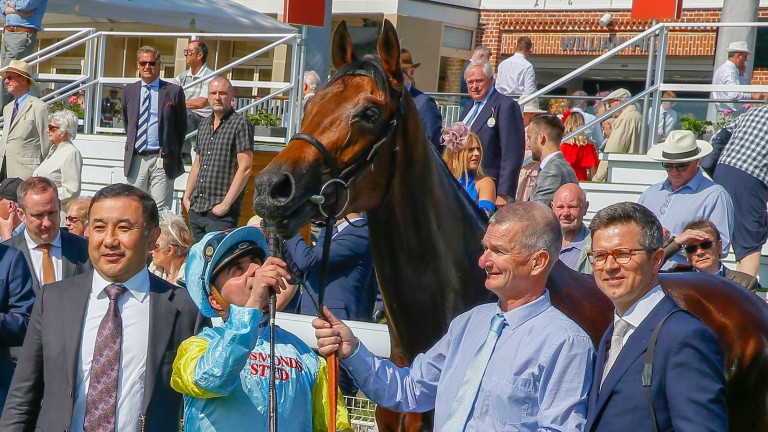 Kazakhstan-born businessman Bizakov bought Hesmonds Stud in East Sussex in 2010, and keeps 35 blue-chip broodmares at the property, where former owner Peter Goulandris bred the likes of Infamy and Terimon.

Bizakov's familiar pale blue and yellow silks have been carried with distinction by the likes of Askar Tau, Altyn Orda and this year's Musidora Stakes winner Nausha.

“I'm honoured to join the ranks of French breeders, and I'm delighted to participate in the continued development of Montfort et Preaux,” said Bizakov. “The stud has seen numerous quality racehorses pass through its gates.

“Montfort et Preaux has a passionate clientele, with whom I will be delighted to collaborate, notably Gerard Augustin-Normand, one of the leading French owner-breeders, who has had incredible success.

“As everyone knows, Le Havre stands at the stud; he is one of the premier European stallions and sire of Villa Marina, recent winner of the Prix de l'Opera on Prix de l'Arc de Triomphe day at Longchamp. Alongside him stands Recorder, who is owned by Her Majesty The Queen. The team, the infrastructure and the land are all superb.”

Mathieu Alex, formerly nominations and client relations manager at Monfort et Preaux, is taking over as stud director, while previous owner Sylvain Vidal is staying on in a consultancy role.

Tony Fry, who manages Hesmonds Stud and has overseen Bizakov's progress to become a leading owner-breeder, said the new purchase represented “expansion rather than relocation” and that it would be business as usual at Montfort et Preaux with the ambition of adding to the stallion roster.

He added that the vibrancy of the French breeding industry played a key role in the decision to buy the stud.

“I've seen in my time working with horses that the scene there has become a lot more dynamic,” he told the Racing Post. “I'm not knocking the old guard at all, but there is a good bunch of young people who have been trained around the world and have returned home, and want to march forward and achieve something.

“The result has been a significant improvement in the stallion ranks in Normandy – not least with Le Havre and Recorder at Monfort et Preaux – and breeders from across Europe are now happy to send their best mares to France.”

“The premiums are great,” he said. “We can win £4,000 for a maiden at Wolverhampton, while a maiden is worth three times that in France and with premiums you can be talking prize-money of £18,000 in total. It certainly makes paying the bills that bit easier.”

Bizakov said by way of explanation for investing in a new country: “I've nurtured a passion for European racing for over 20 years. France possesses, I believe, some of the greatest potential for racing in Europe.

“Whether it's racing, breeding or sales, there is a very favourable system for breeders and owners here. For several years now I've invested in shares in stallions based in France and I regularly send mares to Le Havre, Siyouni, Almanzor, Wootton Bassett, Dabirsim and Kendargent.”

Several of the Hesmonds Stud broodmare band will be sent to Le Havre in 2020, including Tomyris, a homebred daughter of Invincible Spirit who won the Michael Seely Memorial Stakes and Chartwell Fillies' Stakes.

Meanwhile the Kingman filly Nausha has been retired and booked to Ballylinch Stud big-hitter Lope De Vega, while a broodmare career also beckons for Tauteke, a daughter of Sea The Stars who finished second to Anapurna in the Lingfield Oaks Trial in May. She is set to visit Iffraaj.

Altyn Orda, the Kyllachy mare who won the Oh So Sharp Stakes and finished placed in the Falmouth and Sun Chariot Stakes, has been assigned a date with Sea The Stars next year after being covered by Kingman this season.

Ghaiyyath's brother steals the show as Godolphin go to €1.2m

FIRST PUBLISHED 9:00PM, NOV 21 2019
Montfort et Preaux has a passionate clientele, with whom I will be delighted to collaborate, notably Gerard Augustin-Normand