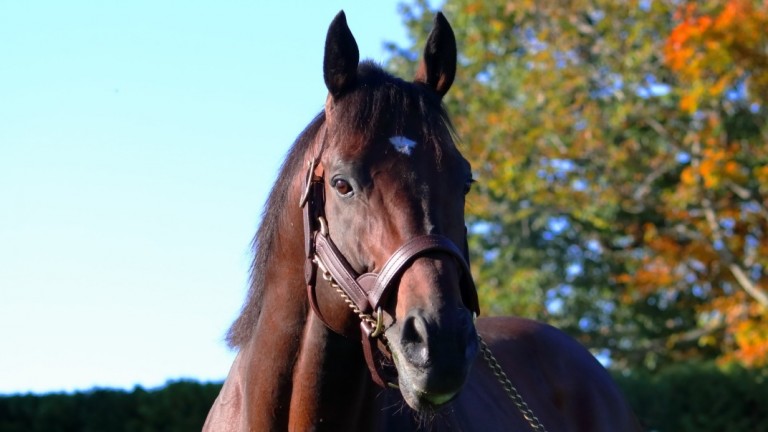 New Year's Day, the source of this season's dual Grade 1 winner and Kentucky Derby first past the post Maximum Security, has arrived at Shadai Stallion Station ahead of continuing his stallion career there from next year.

The eight-year-old son of Street Cry arrived at the Yoshida brothers' stud on Friday after a spell in quarantine, having being bought from Brazilian interests for a reported $5 million.

It has been an eventful year for New Year's Day, who spent his first five years at stud at Hill 'n' Dale Farm in Kentucky, as it was only in January that it was reported that he had been sold to Brazilian owner-breeder Luis Felipe Brandao dos Santos, founder of Stud Eternamente Rio.

Not long after, his second-crop son Maximum Security – owned and bred by Gary and Mary West, whose colours New Year's Day had carried to victory in the Breeders' Cup Juvenile – emerged from wide-margin victories in Gulfstream Park claimers to run out an impressive winner of the Florida Derby at the track.

Maximum Security subsequently made all to win the Kentucky Derby but was disqualified and placed 17th in controversial circumstances, before gaining compensation with a decisive score in the Haskell Invitational in July.

The colt was scratched from last month's Pennsylvania Derby due to a bout of colic but is expected to run in the Bold Ruler Handicap at Belmont Park on Saturday.

In the aftermath of Maximum Security's Kentucky Derby run it was confirmed that Stud Eternamente Rio had sold his sire to Japanese interests.

A spokesperson at Shadai Stallion Station said: "New Year's Day was in Brazil until the spring. After the decision was made to bring him to Japan, he had been moved to a farm in the US that has a contract with us.

“After waiting for the contract to be finalised, he spent around two weeks in immigration quarantine before his departure to Japan.

"At first, he went to Yokohama Animal Quarantine Station and spent three weeks there before coming to the Shadai Stallion Station in Hokkaido.”

They added that the process was common for the import of South American horses to Japan.

New Year's Day, bred by Clearsky Farms and a $425,000 Keeneland September yearling purchase by Ben Glass on behalf of the Wests, is the first foal out of the dual Grade 2 winner and Grade 1 Acorn Stakes runner-up Justwhistledixie.

The dam, a Dixie Union half-sister to Grade 2 Saratoga Special Stakes winner Chace City, has also produced the Graded winners Kingly and Mohaymen, while her two-year-old colt Enforceable finished third in the Grade 1 Breeders' Futurity at Keeneland this month.

New Year's Day has three crops of racing age, with Maximum Security the highlight, although he is also responsible for Grade 3 winners Bourbon Resolution and Fighting Mad, as well as Grade 1 runner-up Yesterday's News.

The sire covered 25 mares in his last season at Hill 'n' Dale Farm in 2018, according to statistics published by the US Jockey Club.

His introductory fee at Shadai will be announced at a later date.

FIRST PUBLISHED 5:07PM, OCT 22 2019
After the decision was made to bring New Year's Day to Japan, he had been moved to a farm in US that has a contract with us