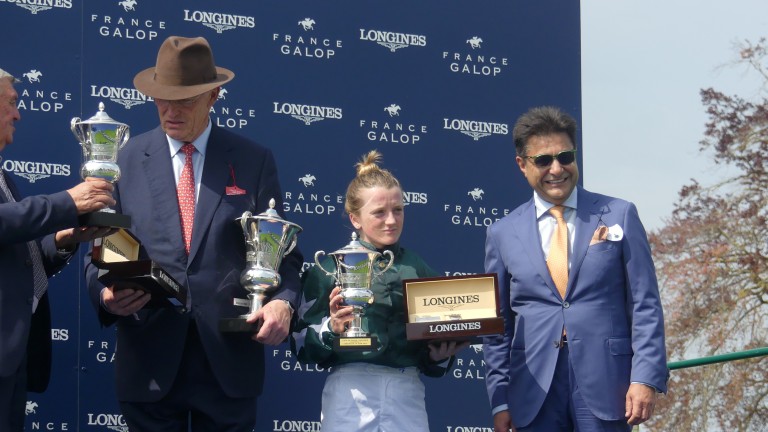 Plenty of determination was required by Hollie Doyle to get Nashwa over the line in the Prix de Diane Longines in a result which left owner-breeder Imad Al Sagar overjoyed.

The Kuwaiti has retained Doyle's services for several years and Nashwa, who won a Listed trial at Newbury before a fine third in the Oaks at Epsom, enters the top of the hall of fame at Blue Diamond Stud, the Newmarket breeding operation he is developing.

The jockey's mount did have the perfect credentials to help her achieve a piece of Classic history. Her sire Frankel’s 22nd Group 1 winner was the result of what is becoming a very productive cross with a Pivotal mare, with that type of mating also resulting in European champion Cracksman, Hungry Heart (Australian Oaks and Vinery Stud Stakes), Veracious (Falmouth Stakes) and Wild Beauty (Natalma Stakes).

It also continues a fine sequence for Frankel with three-year-old fillies. His daughter Homeless Songs, who swept away with the Irish Guineas, and the dazzling return of Inspiral in Friday's Coronation Stakes at Royal Ascot, sets up an appetising summer for his female progeny.

"The feeling is indescribable, especially when you are a breeder, you wait for so long to have a horse or a filly of that calibre," said Al Sagar.

"We knew from last season that the filly was a special one, we didn’t know to what extent but John [Gosden, trainer] has done a tremendous job being very patient with her and she started to flourish and develop from the spring onwards. I think she’s not the finished article yet, she’s growing, and I think she'll be a better filly as a four-year-old, and I’ll keep her in training."

Al Sagar said there had been no concerns about dropping back in trip after Epsom.

He said: "She ran out of stamina, she was entitled to have her chance especially as her half-brother was a mile and a half, by Zoffany. Frankel has more stamina effect than Zoffany, but she was tired the last 50 yards and ran a great race in the Oaks."

Her dam, Princess Loulou, also struck at Listed company, having been bought as a yearling for 310,000gns at Tattersalls Book 1. Already responsible for a winner, Louganini, Nashwa is her third foal and is followed by a yearling filly by Decorated Knight, Blue Diamond’s homebred multiple Group 1 winner who stands at the Irish National Stud.

Princess Loulou was then covered by Dubawi, producing a chestnut colt this March and is now back in foal to Frankel.

'He should be thereabouts' - Apollo One out to cap Charalambous achievement

Kyprios proves another jewel for Moyglare in Ascot's staying crown

Bargain buy from Shadwell proving his worth with Coral Charge victory Back to where it all started for Cheltenham winner Zara Hope Yulong break rivals' hearts at €1.2m for Siyouni's German Guineas winner Txope Sister to Group 1 winner Tofane sells to Yulong for NZ$460,000 on Gavelhouse Mendelssohn off the mark as Shaqra'a Sultan wins on debut in Saudi Arabia Class of 2022 make their mark on Irish National Stud course